This was a strange day – Friday the 13th and all that, Valentines Day eve, and also the eve of our wedding anniversary. Yes, that’s right, we got married on Valentines Day, although in those far off days, less fuss was made about it and I don’t even think that long stemmed roses had been invented yet. If we had thought it through a bit more carefully we might have changed the day of the wedding but you know, people were coming long distances etc. I was so out of touch back then that I didn’t even know it was Valentines Day. The problem with having your wedding anniversary on Valentines Day is that you can never get into the restaurant you really want, and if you do, then the place is full of young couples looking dreamily into each others eyes, and roving bands of flower and tat merchants are looking to make a buck by guilting you into forking out for an overpriced rose or any number of heart-shaped bits of shite.

Sorry. Getting a bit agitated here. So anyway, long ago Strop and I decided we would just do our celebrating either the day before or the day after our anniversary, when restaurants were in a more normal mode of operation.

Now, why was I telling you all of this?

So Friday, I was just expecting the normal thing, hit King Street after work, have a meal, make up something vaguely amusing to say about it and then get back to worrying about second book syndrome. But no, Strop is in town this Friday, “learning about stormwater”.

We went to Ash Street Cellars, which was busy but had a few vacant tables. I had heard good things about this place but had never been before (one of the draw backs of always eating on King St) so I was looking forward to trying it out, but was a bit worried that it might be an unfair comparison with African Feeling later on. Not to mention the threat to my waistline presented by two meals out in quick succession. Plus the odd beer – and they were quite odd, but more of that later.

We ordered empanadas, sardines, and an iceberg lettuce salad, plus a glass of wine. Quite abstemious by our standards really, but I had an afternoon of ignoring emails to get through before we took on African Feeling. The wine was great – cold and dry and pink. The food was good too, but we had to ask where the salad was (forgotten by the kitchen apparently) then we had to ask again after watching our waiter walk past the plate of pale green lettuce wedges sitting all alone at the pass. In the end they comped the salad, but still… Friday the 13th? Maybe.

So, on to King St. We met up again at the Union Hotel, where Strop was waiting for me with three phones and a beer lined up on the table in front of her.

“They’re only serving beers from two makers, but there is lots of different types, and you can taste as many as you want,” she said, a bit excited. “There’s one called Lamborghini. You should have that one.”

The Union has gone completely hipster on the beer front. There are sixteen varieties that you have never heard of, all with stupid names that you will never remember because the beer is so strong that by the time you’ve tasted enough to work out which ones you like, you’re completely off your face. Sure they taste nice, but this amount of choice is what’s ruining the nation. And whoever said we should like our beer? Tasteless beer was good enough for our fathers and our father’s fathers, it should be good enough for us too. What this country needs is a strong leader to whip it into shape – someone like Peta Credlin.

So anyway, we were quite cheerful by the time we toddled up the street, having waited out a tropical downpour that filled the gutters and got Strop thinking wistfully about stormwater.

African Feeling is in a big newish building right next door to Arabella. We decided to sit outside as the rain had stopped but it was still quite muggy. As we perused the menu we had plenty of time to give detailed attention to the fashion crimes passing by on the narrow footpath. There was lots of busy hipster action – tight Warwick-Cappa shorts, ponytail and beard – and plenty of mullet dresses on offer. These popular atrocities are just wrong. They turn the description of the hair style – business up the front, party out the back – on its head, promising instead a party up front, and business out the back.

Obviously, by this stage we needed more beers. Strop had to peer in through the window to get the waiter’s attention as we were masked from his view by a wall – that was what he said anyway. A couple of Tuskers hit the table soon afterwards. There was no mention of a glass, so we drank out of the bottle in what I assume is a culturally appropriate way. It is certainly appropriate for King St.

Knowing nothing at all about African food, we probably should have asked the waiter for advice. He was a very cheerful young bloke with fading blue hair. As Strop put it, “He looks like he knows what he’s doing… well he looks jolly anyway.”

For entrée we ordered a dumpling dish simply on the basis of its silly name (again). The kpoff kpoff turned out not to be ‘light fluffy and golden’ as described in the menu but rather dark brown and stodgy. Still they were rather pleasant and, with their spicy dipping sauce, they went down very well with our new, elephant endowed beers. The kitchen forgot our other entrée dish, plantain, which we had chosen on the basis that it seemed very African. Friday the 13th again? I am not a superstitious man, but it would be silly to ignore such an obvious pattern.

The waiter apologised and said the plantain would come out with the mains if that was okay. We said it was.

The mains were a fish and coconut curry, a goat stew and some chapattis.

The fish curry was very nice, with large fillets of fish and some vegetables in a very tasty and quite thick sauce. The goat stew was dark and strongly flavoured, and extremely spicy. It seemed to have been cooked for a long time as the goat was extremely tender but it was so hot that we immediately called for some yoghurt and mint to soothe our taste buds. At this point, I remembered that the waiter had asked how spicy we wanted the goat and fish dishes. Strop, never one to stick to standard units of measurement, jumped in with “a bit hotter than medium”. So what does that mean? Hot?

Well the goat was hot, and the fish was medium, so I guess on average they were a bit hotter than medium. The plantain didn’t have much flavour but it was nice with the curries. The chapattis were excellent.

On the way home there was another tropical downpour. The long walk home is even further when the gutters are overflowing. Next up is Europe Bar and Grill. I have been waiting for this since forever – anyone want to join us? 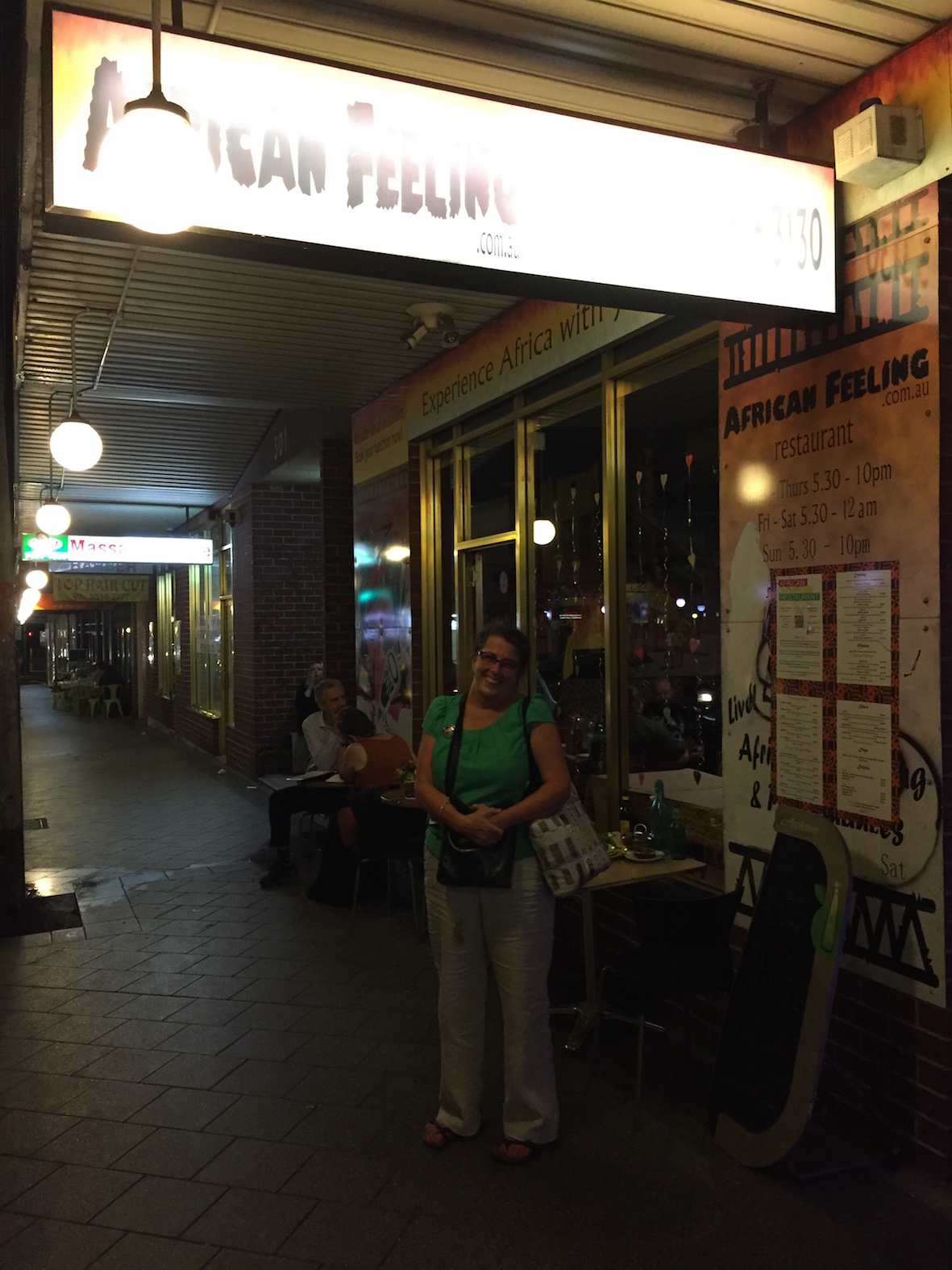