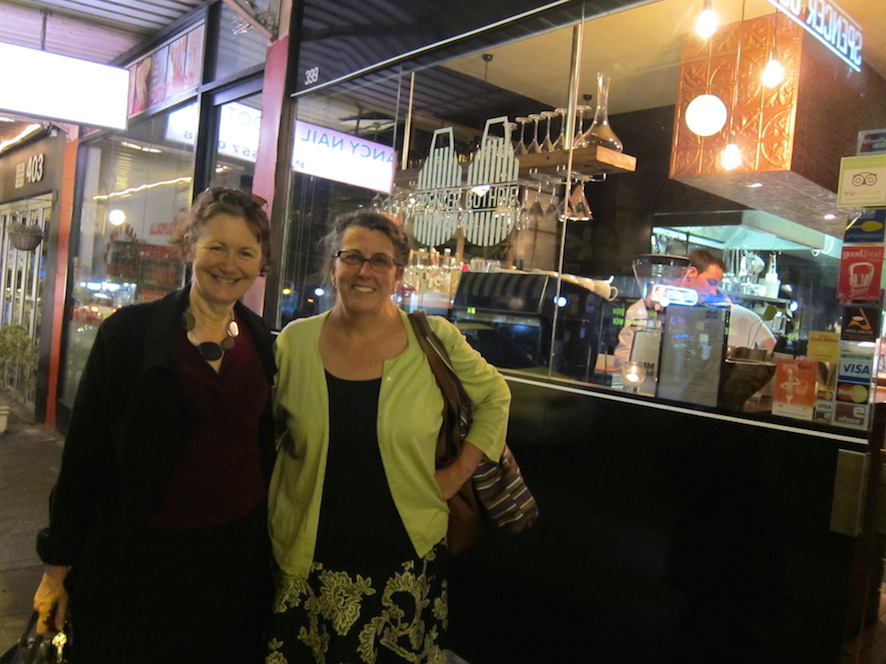 I got a message from ‘Uncle’ Carl: In town on tuesday, lets catch up, go for a meal.

Great. I don’t think I’ve seen Carl for about 30 years, which is kind of a lifetime ago.

“Where should we go?” asked Strop.

“Somewhere good. He’s come all the way from Brisvegas, we don’t want to inflict anything too borderline on him. What’s up next?”

“Hmmm… vegetarian,” I said, thinking about the photo we have somewhere of Carl squatting over a backyard firepit-turned-barbecue, wielding a tomahawk. “And after that?”

On Tuesday morning I checked the website to see if we should book. Closed on Tuesdays. Shit. What’s next? 2042. What kind of name is that? It’s closed anyway. Shit. Let’s just meet up at the Social Club. We’ll have to go to whatever is open. Okay.

When Anna found out that Carl was going to be in town she kind of insisted on coming too. She is another friend from that group-house era whose life has remained entangled in ours over the years, unlike Carl’s.

The Social Club was almost deserted, which allowed Anna, Strop and I to do some actual holiday planning, something we had failed to achieve on our last group outing to Japone Sushi. Carl texted to say that he was running late. Not to worry, we had been early anyway. Another round?

We were busy wondering whether Anna’s newly purchased big suitcase was going to fit in the compact car we were hiring in London, when Carl shouldered his way through the Social Club’s doors. Friendly kisses. Manly hugs. More drinks. While we were catching up (How long since we saw you? Isn’t getting old a bastard. My knees… How many kids? What sexes? Grandchildren! Have you retired yet?) I remember thinking that I should take some notes. And some photos. After a bit more drinking we decided to find some food, and stepped out on to a very quiet King St. The first place we found that was both open and served food was Bloodwood. Now I probably should point out that Bloodwood is probably the best restaurant on King Street. And I should also probably point out that quite a few people were keen to accompany us when we went there, in fact Strop had been entertaining thoughts of a bit of a Do there. But as we stood outside looking up and down the unnaturally quiet street we realised that Tuesday Night left us with very few options. We’d just have to sacrifice our principles and eat some truly yummy food. Oh well.

Inside, Bloodwood was packed and pumping (Please take note Spencer Guthrie). We sat up the front and ordered more drinks while we waited for a free table. And some polenta chips to soak up some alcohol. About this time I remembered the need for notes.

This is what I found when I eventually got around to writing the blog and remembered that I had typed the notes into my phone: Search for the perfect pilsener perfect reisling – Rouse hill Australian brewery – Music specials – Licking the Gorgonzola – Set banquet – Charcuterie – Lentils – Cuttlefish – Duck and sparrow poor mans orange – Duck fat dumplings beef brisket – Funerals – Meta ironic – Bandicute – Sri Lankan love cake – Choke cake

No, I have know idea either – although I blame auto-correct for some of it – surely I would remember eating sparrow.

Here is what I do remember.

Carl’s hobby seems to be a search for the perfect pilsener, his own version of The Quest. That and wearing lycra.

Bloodwood had that very day been awarded an award for Best Drinks List 2015. We certainly drank a very nice Riesling. From Somewhere. And then something red.

The staff at Bloodwood are bloody good(!). We didn’t have time to finish the polenta chips and the very tasty dipping sauce (ok, that explains the gorgonzola note – Strop wouldn’t let them take it away until she had finished all the sauce). We were ushered back past the bar and kitchen to the main dining area out the back. It’s kind of a miracle, they way they extract such great flavours from such a tiny kitchen.

We decided to go with the set menu because it seemed like good value, and by this stage we were getting beyond decision making. And it was a sharing kind of night. The first dish included olives, pickles, and I think possibly my all time favourite food concept: beef jam. I can’t work out exactly how many courses there were but there were enough. You can google it. The dishes were for sharing and had to be divided up. Carl, who works in the hospitality trade, took exception to my inept attempts to serve up something (might have been the duck) and took over wielding the fork and spoon like a pro for all the subsequent dishes. Got out of that easily, I thought.

There were lentils and cuttlefish and dumplings with beef, and I seem to remember loving the Sri Lankan love cake, but look, it was all fantastic. There is a very good reason that Bloodwood is packed on a Tuesday night, and it’s not just that everywhere else is closed.

Unfortunately I never did remember to take some photos.