I think I was hoovering up my tenth, or maybe twelfth, loukoumades, when I noticed that Strop and the Stropolina had stopped eating, stopped talking, and were sitting back just watching me devour the crispy-sweet, cinnamony morsels.

“Aren’t you eating?” I asked, reaching in, to spoon up another one.

Now I know that tone, but I kept eating anyway. Those things were too delicious to be wasted, and I refuse to be defeated by what is basically a donut. I even soldiered on through a coughing fit induced by inhaling a cloud of powdered cinnamon. I kept eating till I could barely move.

Kerasma was a bit of a surprise package. What does Souvlaki Merchant mean anyway? Are we talking retail or wholesale souvlaki? I admit I didn’t have very high expectations as we rolled out of the Bank Hotel, after a few meeting-up beers, but the charcoally-meaty smells wafting out of Kerasma had my stomach on its knees, crying out for food.

Apparently kerasma is Greek for a tasty treat to give guests (if it was up to me I’d choose the loukoumades for my treat every time). I hadn’t expected Kerasma to be Greek, although I’ll admit ‘Souvlaki Merchant’ was a clue that I should have cottoned on to sooner, but I’m a visual person and there is not a skerrick of blue and white about the place, let alone a picture of the Parthenon or Nana Mouskouri. Kerasma is all dark and red, with music that could just as easily be Middle Eastern as Greek to my untrained, bogan ears. It is actually a fairly small place but the dark interior, and the mirrors on the wall make it look bigger. The kitchen takes up a large area with a big charcoal grill up the front. It looks and sounds like a high end middle-eastern restaurant, but it’s Greek and it does takeaways too. Which is something I am going to keep in mind next time I feel a bit peckish in Newtown, because I like what these guys are doing. 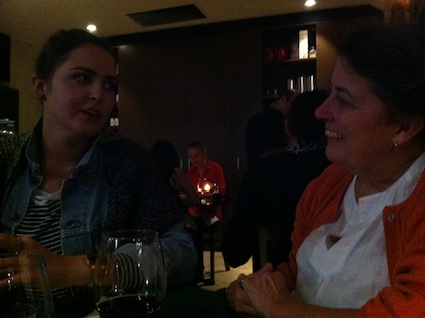 My brother Steve was supposed to join us but he had been waylaid by an aged-parent-wrangling crisis that involved too many pharmacists and not enough doctors, so the three of us decided to start without him. The menu is small. Literally. It is another anomaly, a small folded piece of paper that looks more like an advertising pamphlet than a menu. In fact it is not so much a menu as a build-your-own, step-by-step guide to souvlaki ordering, which is again, at odds with the aspirational decor. On closer examination though, the need for this level of guidance becomes clear. The list of ingredients available to fill your souvlaki is large and exotic. Ocean trout? Liver? Tongue? Snail? And what is a sheftalies? Anyone?… Beuller?… Luckily the very helpful waiter is able to explain. It is of course a sausage. Yumm… sausage.

You can have your souvlaki in a pocket, a wrap, or they’ll even deconstruct it onto a plate for you. Then there’s the pickles… and the dips… It was definitely time to start over-ordering.

Dips, we want some of those, and olives, what about tahini, yes that too, and some of the sweet potato one. Don’t forget the beetroot one. Strop went for one of the sausage souvlaki options, while the Stropolina and I stayed traditional with lamb. We chose a Greek wine, a syrah, which is what shiraz used to be, according to our waiter. It was good. Soft and intense, but not as spicy as shiraz. Soon there was food everywhere. There was talk, there was laughter. There was hysterical laughter from the table next to us, which was full of fairly inebriated twentysomething women and one bemused-looking young man. 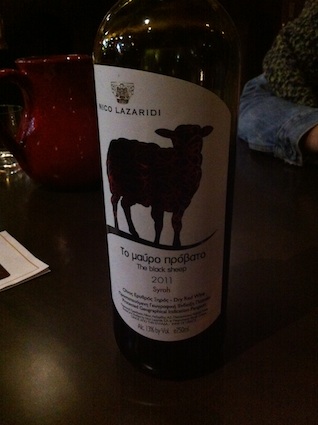 The food was pretty good, but when it felt as if the earth was moving I realised that this had more to do with the restaurant being perched on a bridge above the railway lines, than the transcendent nature of our dining experience. There is even a window just outside the loo that looks straight down onto platform 1 of Newtown Station. Hellooo. I tried waving but no one noticed.

By this time we had made the mistake of reading the dessert menu. There are only three sweets, we thought, so that’s easy, we’ll have all the desserts. They were plentiful and they were good. The loukoumades come with a warning that there is a 20 minute wait, but trust me, they’re worth it. Relax, have a coffee.

I was very sticky when it came time to pay the bill.

On the way home Strop notice this charming tableau in the Discount Store window. Happy Easter.