It’s our last breakfast on the quest, and a chance to catch up with old mates. As we’ve got closer to the end of King Street we’ve had a flurry of activity with lots of people wanting to fill up the dwindling supply of Quest berths. The previous night we had an enthusiastic catch up session with John, Pauline, Jill and Roy. We didn’t have any room for them left on the Quest, so we met up in the Rocks instead, at the Lord Nelson, and had an extremely jovial time. And a bit of a hangover the next day, which made me regret the ease with which I had agreed to that third bottle of extremely drinkable New Zealand Sav Blank. Pass the paracetamol please.

By the time I got to South End Cafe I had perked up a bit but was still feeling that weird lack of temperature control that seems to come with hangovers – or is that just me? Anyway, I was a bit early which gave me a chance to have an excellent flat white to settle things down a bit.

South End is a popular cafe, full of what looked like locals having breakfast or getting takeaways. The front room is quite large with windows on two sides and there is a second room out the back for overflows if needed.

Pete and Mindy (last seen at Lentil As Anything) were our Quest guests for this outing, stopping in for breakfast on their way to the airport to pick up their daughter who has been doing work experience in Fiji (in my day you only got to go to AWA in North Ryde). They arrived just before Strop, who had come straight from a community rain-garden planting session. In between explaining just what a rain-garden is, we managed to order a round of juices. Pete wanted something with ginger, Strop and Mindy had beetroot, apple and something with ginger, and I had orange juice.

Alarmingly the juices came in jars (hipster alert) but were very pretty and colourful as well as being highly tasty (so I am going to hold off slipping into full anti-jar-rant mode, but as Uncle Carl says, no one ever thinks about the lids, the real victims in this situation).

Food ordering was quite an extended process. Pete has some quite particular dietary requirements. He is allergic to red meat and to dairy. This is not some kind of airy-fairy gluten-free wannabe shit, this is full on anaphylactic carry-an-epi-pen-or-you’ll-die-if-some-arsewit-cooks-the-mushrooms-with-the-sausages territory. So it was great to see the waitress taking it very seriously and checking how things were cooked when she wasn’t sure. She also worked out the cheapest way to order the breakfast that Pete wanted. This turned out to be the Vegie breakfast with a couple of substitutions, to replace the haloumi and the mushrooms. All the service was very good, but this aspect was a standout. And Pete survived the meal, so you can’t say fairer than that really.

Mindy went for a bacon and egg roll, Strop ordered the pea and haloumi pancake, and I had the South End Brekkie (big breakfast equivalent).

The chat ranged far and wide, covering holiday destinations, Fijian markets, all the nasty diseases ticks can give you, the density of foxes in urban areas (8/km2 if you were wondering), and where the best trout are at Fryingpan Arm. Pete drew a napkin map for the sake of clarity. X marks the spots.

The food was good, although I was a bit disappointed that the olives with my brekkie were standard stuffed olives, but on the other hand I had sausages as well as plenty of bacon AND haloumi. One of Pete’s substitutions turned out to be very nice home-made baked beans. Strop commented that she couldn’t really find the haloumi in her pancakes (she could have had some of mine), but they looked great – very green –  and the peas with caramelized onions were delicioius. Nothing was left over so it definitely passed that test. We followed up with coffees and tea. I can’t comment on the tea, but the coffee was really good. I would go back again just for the coffee.

It is really heartening to find so many good cafes at the far end of King Street. It is certainly worth a walk in the morning sun to check them out. 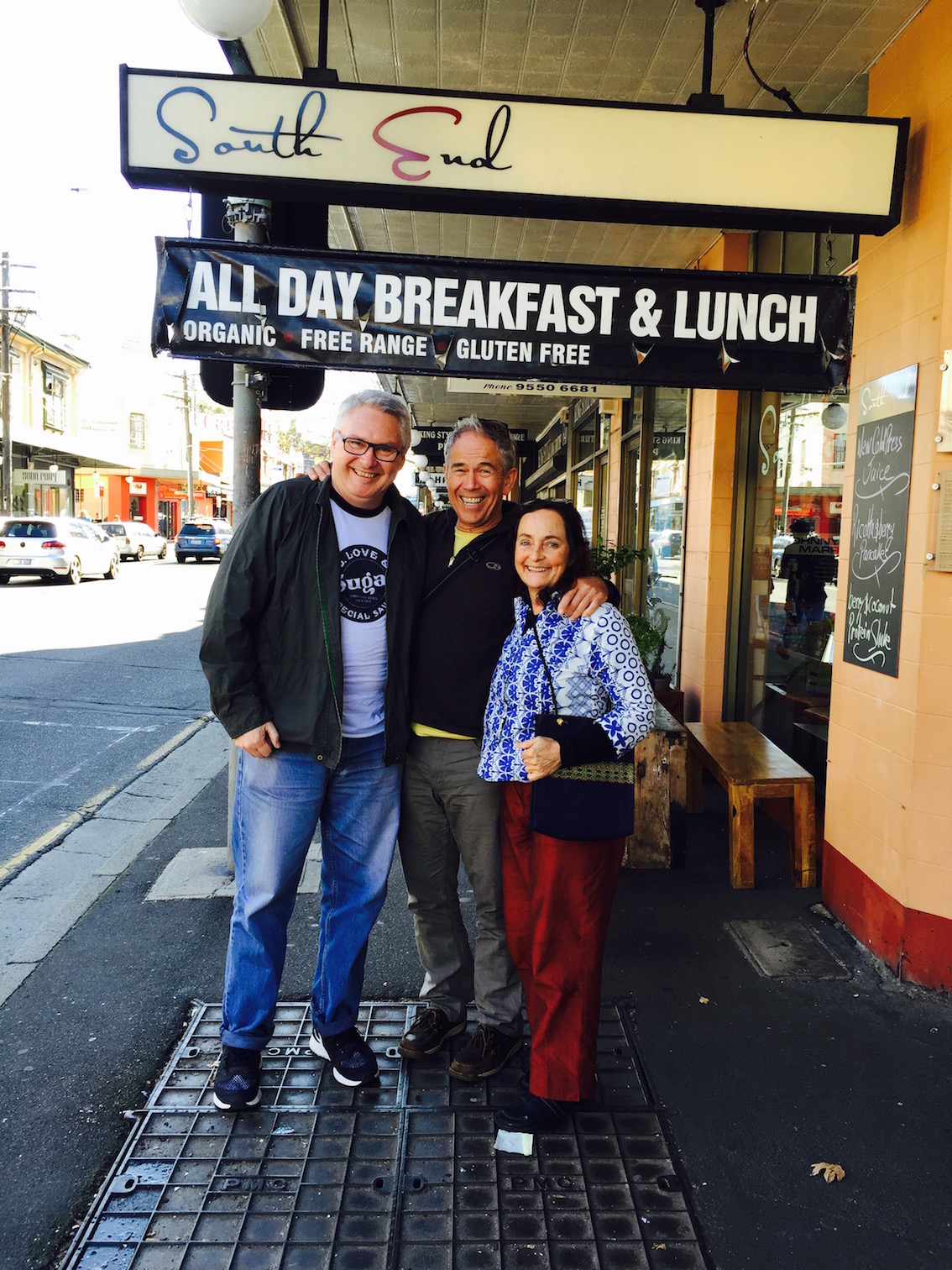