I’ve been eyeing off Thai Riffic ever since it opened. It is intriguing with its mismatched combination of a charmingly absurd pun name, and its too-cool-for-school Thai-yuppie aesthetic. It didn’t seem very Newtown – very King Street – when it opened back in whenever, but then every time I go past it has lots of punters facing up to the plate. So what would I know? It is bigger than most of the Thai places on King Street, occupying a whole building on the corner of the laneway known as Elizabeth Street. With its facade painted an alluring shade of indeterminate colour, its restrained signage, and moody lighting, this is a Thai restaurant but not as we have come to know them. It’s the sort of place that doesn’t number its menu. Aspirational Thai, a new demographic. 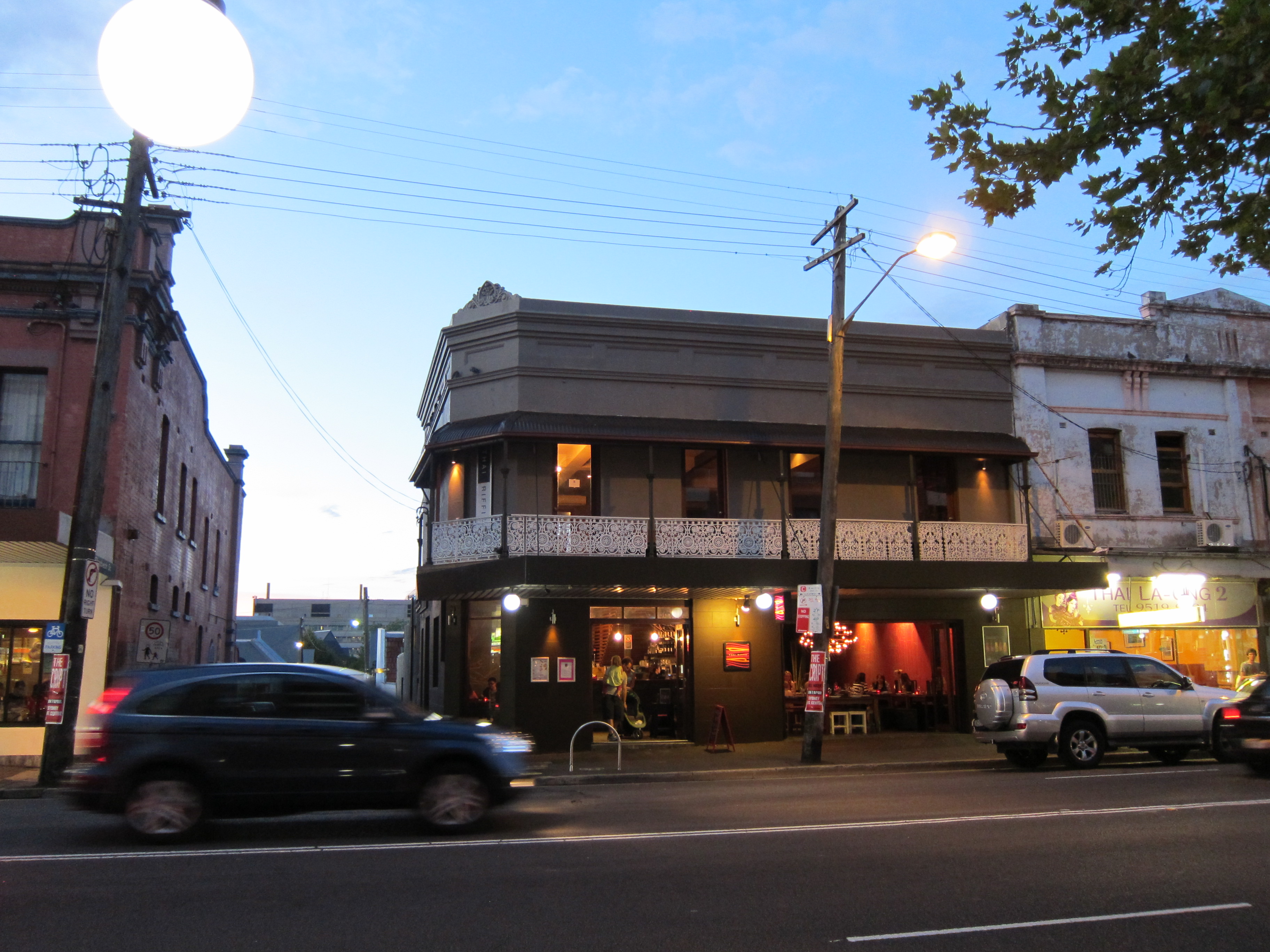 So it’s Friday night. We have a booking for 5 at 7:30, but I get to the strip early as I’m the only one with nothing better to do before eating than to wander up and down, checking out the young people in the trendy new bars, wondering if it is cool for a lone old folk to occupy a retro-recliner and read a sci-fi novel on my ipad while sipping on a daiquiri. No, probably not, so I opted for a pub, a middy, and a game of rugby where the underdog didn’t get up in the second half.

With the consumption of my middy perfectly timed, I turned up outside Thai Riffic just in time to meet Anna. Matt and Strop arrived soon after, gradually filling up our slightly over sized, and somewhat sticky table. Jamie is driving from Bankstown so there is no telling when he will arrive. We are located next to the kitchen in a passage way that opens out into the rear courtyard. It is a bit noisy but we are well placed to hail passing waiters. There are plenty of them and they are needed. This place is huge and pretty close to capacity tonight. There is more room upstairs as well. The first thing I notice, apart from very pleasant smells from the kitchen, is the number of small children arriving complete with prams. Family friendly. The crowd is generally young and there are a few large tables for birthdays celebrations. Everyone seems noisily happy.

Anna tells me that her friend Frank had died earlier that day – her own husband, our dear friend Gordon died only two months ago. We are at an age where people we know well are dying around us. People the same age, people younger. I found out this week that my favourite living author Iain Banks, has terminal cancer. His new book will be his last. Not anyone close, but he is the same age as me, and he writes like a bastard, with wit and charm to float his imagined worlds. He wrote very honestly and unsentimentally about his illness on his website: “I am officially Very Poorly”. So yes, death is in the air this week. I suppose it always is, but sometimes it comes into our orbit and we cannot ignore it. But let’s try anyway.

On finding out the menu is unencumbered with numbers, Strop goes all FFS and gives Matt the job of counting – that is the price of joining us on the quest. We order entrees of Crispy Crab Dumplings, Duck Rolls and Chicken Pandans. The waiter is very happy to provide 5 pieces of each instead of the standard 4, so there will be no unseemly arguments or messy dividing up to be done. This time Number 37 is Sizzling Garlic And Pepper Beef. To accompany it we lean heavily on the signature dishes and all-time favourites lists, deciding on Crispy Pork With Sweet Chilli And Kaffir Lime, Chilli Jam Soft Shell Crab, Five Spice Duck, and Papaya Salad. We are drinking a very easy to take West Australian dry Rosé from the wine list.

Jamie arrives just before the entrees, having hot-footed it from the Seymour Centre where he has parked, as he and Matt are planning to consume some improvisational jazz after the Thai tucker.

The entrees are hot and crispy but not spectacular. The conversation ranges over a variety of topics – whether keeping your wallet in your hip pocket can lead to leg paralysis – man bags – why young people can’t use email – should Generation Y be re-named Generation WTF – the problems of fat fingers and tiny screens – the technical definition of a grandchild’s first steps – car sexuality – apparently you unlock a Prius by having a large black thing in your pocket while stroking it’s handle(!).

The mains arrive before I have time to fully explore this last topic. Some are excellent, others not really. The pork and the salad are disappointing, too much flavour in one and not enough in the other. The crab is wonderful, crunchy and lots of aniseedy flavours from the sweet basil, and the sizzling beef is very good too. The servings are generous so there is no room for dessert or even for a gelato on the way home.

My impression of Thai Riffic is that it could be very good but suffers a bit from its aspirations and the scale of the operation. There is no time for attention to detail. The food is generally good but not great, the prices are not cheap but not expensive, the staff are friendly but a bit sloppy. It would be interesting to go back when it is not so busy – but there is no time for that, our first Vietnamese is next: Thanh Binh. We’ve got a long way to go and winter is coming.