For a long while I thought this place was called Blossom Lotus, which is kind of bland and a bit confusing (lotus blossom, surely?), but a close inspection of the menu reveals its true name: Blossoming Lotus. This is a much more satisfying name, poetic even. Both are preferable to Vegetarian Food which a big yellow banner shouts up and down the street.

This is our first daytime outing. We are having lunch with Ashley, Paul and the Nedsky. Ashley and Paul have been dog-park friends for a long time (Ned is a more recent acquaintance — but not by that much, I realise — 5 ? Already?) They are the rare and valuable kind of dog park friends who talk about things other than dogs and who get your jokes.

It is also important that our dogs are compatible. Both are medium-sized, black, and obsessed by found objects (ours: balls, theirs: sticks). They are very relaxed dogs who ignore each other amicably. The only fly in the ointment of our relationship is that they are vegetarian. We have been wanting to inflict the quest on them for a while but we had to wait for the alignment of a decent (or at least plausible) vegetarian eatery and a time slot to suit young Ned. So, Saturday lunchtime at Blossoming Lotus it is. Will it be open at lunchtime, I wonder? Of course, Strop laughs in the face of my doubts.

The place is indeed open, if not exactly rushed off its feet, and there is a very pleasant smell on entry. It reminds me just how hungry I am. There is a big display of hot food at the front which is targeted at the takeaway market.

Blossoming Lotus brands itself as a Thai vegetarian restaurant. It comes from the same Buddhist vegetarian tradition as Green Gourmet but it is less hung up on the whole meat analogy thing. There is a lot of nattering going on so it takes a while for us to settle down and peruse the menu. Paul and Ashley have spied a couple of things at the front that take their fancy, along with the menu items.

We order Golden Parcels (hard to go past with that name) and Curry Puffs to start, following these up with an eggplant dish (I was too busy having fun to take notes, and unfortunately the Blossoming Lotus does not have a website – which is where I usually go to check what we actually had to eat), something with black bean, and a pork analogue. One of these was Number 37, but I have no idea which one. We also order fried rice for young Ned to coincide with the entrees.

The young man taking our order is very friendly and patient in the face of our confusion and indecision. Ned occupies himself with some urgent colouring-in so he doesn’t have to put up with grown-up distractions. He is going to a birthday party after lunch apparently and needs to get in the zone. The birthday boy is apparently called Nirage (I know it doesn’t look right to me either), and the present is a Hero Factory (no idea – Lego apparently). Ned makes me feel very old sometimes.

The entrees are crispy and golden. The fried rice is huge and unusually delicious, so we all have to help Ned out with it.  When the mains come they are good too, with the eggplant proving to be the crowd favourite. The food succeeds at being fresh and tasty, and doesn’t panic too much about not being meat. And there is lots of it.

During the meal Ned takes great delight in pointing out to Paul and Ashley, that most of Strop’s vocabulary consists of bad words that are banned in his house. It’s as if their nice vegetarian family has suddenly found itself sitting down to eat with a cannibal. The offending words are apparently hate, stupid and, my personal favourite, idiot. I sympathise with Strop, we are currently discussing the election, and it’s hard to see how you can carry on a conversation without those words unless you are going to use really bad words.

So all in all it was a fun lunch, and Blossoming Lotus turns out to be a far tastier vego experience than Green Gourmet. Next up is the Japanese joint next door.

We approach with some trepidation, this is not a place we would venture into if it wasn’t for the quest. It has an attitude to food that is basically alien to Strop and I. Generally we’ll eat anything as long as it tastes good and isn’t moving. The Green Gourmet on the other hand has lots of rules about what can and can’t be eaten. But they don’t mind pretending to eat things they’re not allowed to. Like meat.

I really don’t understand the whole meat analogue aspect of vegetarian cuisine. I mean, if you don’t want to eat meat, why eat pretend meat? Aren’t there enough vegetable out there? Like a lot of mysteries it arises out of tradition rather than logic. According to the wiki, Buddhist vegetarian cuisine grew out of what was cooked in monasteries. The monasteries also provided room and board for travellers and visiting family, and in order to make them feel more at home, they served familiar meals. Except that the meat was substituted for something else, usually some form of gluten. Gluten doesn’t have much flavour of its own, but the texture and appearance can be manipulated if you know what you are doing and over time the gluten-based meat analogues became very sophisticated, right down to reproducing the follicles on the skin of roast chicken. Apart from anything else you have to admire the skill and dedication that this represents. And they don’t think it’s weird. That’s the really weird thing. 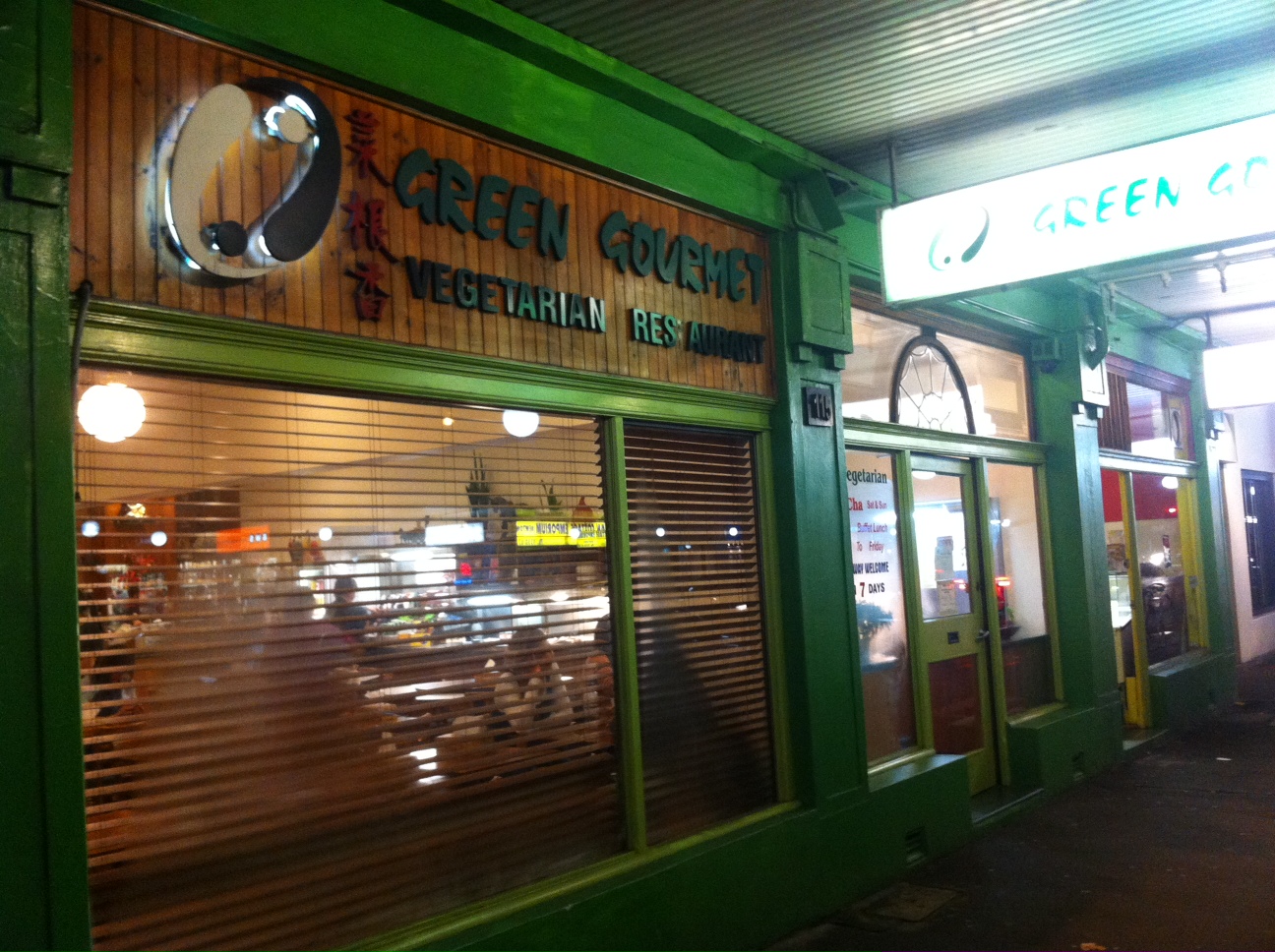 We have brought along the Stropolina and her vego-gangsta mate MLE to add a bit of serious vegetarian insight to the whole experience. MLE has similar feelings to ourselves about the faux-food. Apart from any intellectual misgivings she may have, she finds it weird to eat because the textures and tastes set off her finely-tuned meat radar. An evening full of gluten masquerading as meat is likely to overload her meat defences and leave her vulnerable to a sneak attack by a side of bacon.

Green Gourmet is a big place and always seems to be busy, full of all the vegetarians and buddhists hiding out in Newtown. Unfortunately the list of things that Green Gourmet doesn’t serve aligns fairly closely with my own list of favourite foods: meat alcohol, eggs, dairy, onion and garlic. I find this ideological approach to eating both scary and fascinating. We were ready for no meat, egg or dairy – we even googled vegan, just to be sure – but the alcohol thing was a bit of a surprise, – “Really,” said Strop. “Are you sure? Cause I think I’m going to need a drink.” – and the onion and garlic thing – they cause loathsome odours and lustful impulses apparently – bought on more head scratching. Oh well, what can we eat then?

Quite a lot really, but the first decision is whether we are dining a la carte or a la buffet – where you load up your plate and pay by the weight. We opt for ordering from the menu and being waited on, but I do find myself drawn to the idea of paying for food by weight.

In lieu of alcohol we opt for jasmine tea and fresh coconut water. The menu covers a lot of territory with sections devoted to Raw & Salad, Steamed Yum Cha & Dim Sim, Crispy Pan Fried, Mushrooms, Tofu and Tofu Pillows, and Claypots, as well as Better_Than_Meat.

We decide early on to go the whole hog and embrace gluten in all its forms, starting with Crispy Beijing Duck Wrap pancakes. Everyone enjoys these, although the Stropolina comments that using Hoisin sauce is cheating because it makes everything taste good. Next up is Chestnut Sang Choy Bow. I quite enjoy this as it is nice and crunchy in its lettuce leaf wrapper, but the Stropolina can’t finish hers, tapping out after only a few mouthfuls. With the entrees out of the way the table rapidly fills up with plates. There is a Malay-ish curry with potato and chicken substitute which is nice enough but I am beginning to understand what onion brings to the table normally. Better_Than Salt & Pepper Calamari isn’t, especially when it starts to get cold. Shantung Not Chicken is good although we do spend a fair bit of time examining the follicles on the skin of the Not Chicken. Ginger Sea Treasures turns out to be a rolled up thin pancake with seaweed mushrooms and ginger and it is very nice. We order Five Grain Rice to accompany all of this and it turns out to be a combination of rice, beans, barley and buckwheat. It is nice enough but I can’t finish mine, however Strop likes hers and asks for a container to take the rest of mine home.

As usual we have over-ordered, mainly out of curiosity this time rather than greed which is the normal situation. Even though I am full, I quite like the idea of trying some tofu ice cream, but I am voted down by MLE who decides that we need cocktails to overcome our alcohol deficits more than we need dessert analogues.

We relocate to a bar where we partake of complex combinations of exotic alcohols and contemplate the evening. It has turned out to be more of an anthropological investigation than a normal dining experience, the Not_Food more interesting as a curiosity than as actual food.

Next time it is more Asian food, this time Japanese at Asakusa. I am still hanging out for a steak.