We’re closing in on Newtown Station now which I’m arbitrarily declaring to be the nominative half-way point for the Quest. Unfortunately the powers that be are making things harder for us – the redevelopment of the station has spawned a bunch of new eateries for us to make our way through before we get there. Oh well – better get on with it then.

This week it is Cafe C, which is an un-themed, run-of-the-mill cafe. It seems to be very popular and it has a great location, right at the end of Erskineville Road, and on the corner of Mary Street. This is a breakfast outing as the Cafe Suite of rules has been invoked. Our guest this morning is Anna, who has come all the way from Five Dock, and passed a lot of very acceptable breakfast venues along the way, so I hope Cafe C makes it worth her while.

It is a lovely saturday morning so we sit near the front where we have a good view of the passing parade. Being near a pedestrian crossing gives you plenty of time to give the crowd a serious once over, and wonder at some of their life choices, not to mention their fashion sense. The downside of being near a busy intersection is the noise. And being Newtown there is always some emergency going on nearby, with ambulance sirens and flashing lights punctuating the roar of semi-trailers and the squeal of bus fan belts. Despite the noise we have a lovely chat, while keeping an eye on the street in case we catch a glimpse of the legendary Goat Man of Newtown. What with the tattoo and body art expo having just been in town, I thought Anna may have been referring to body adornments: someone with horn embellishments or perhaps big floppy ears. But no, apparently she has seen (with her own eyes), a man leading a pair of goats along King Street. I want to believe, but nowadays I’m old enough to need proof. So please let me know if any of you lot have seen the fabled Goat Man of Newtown. 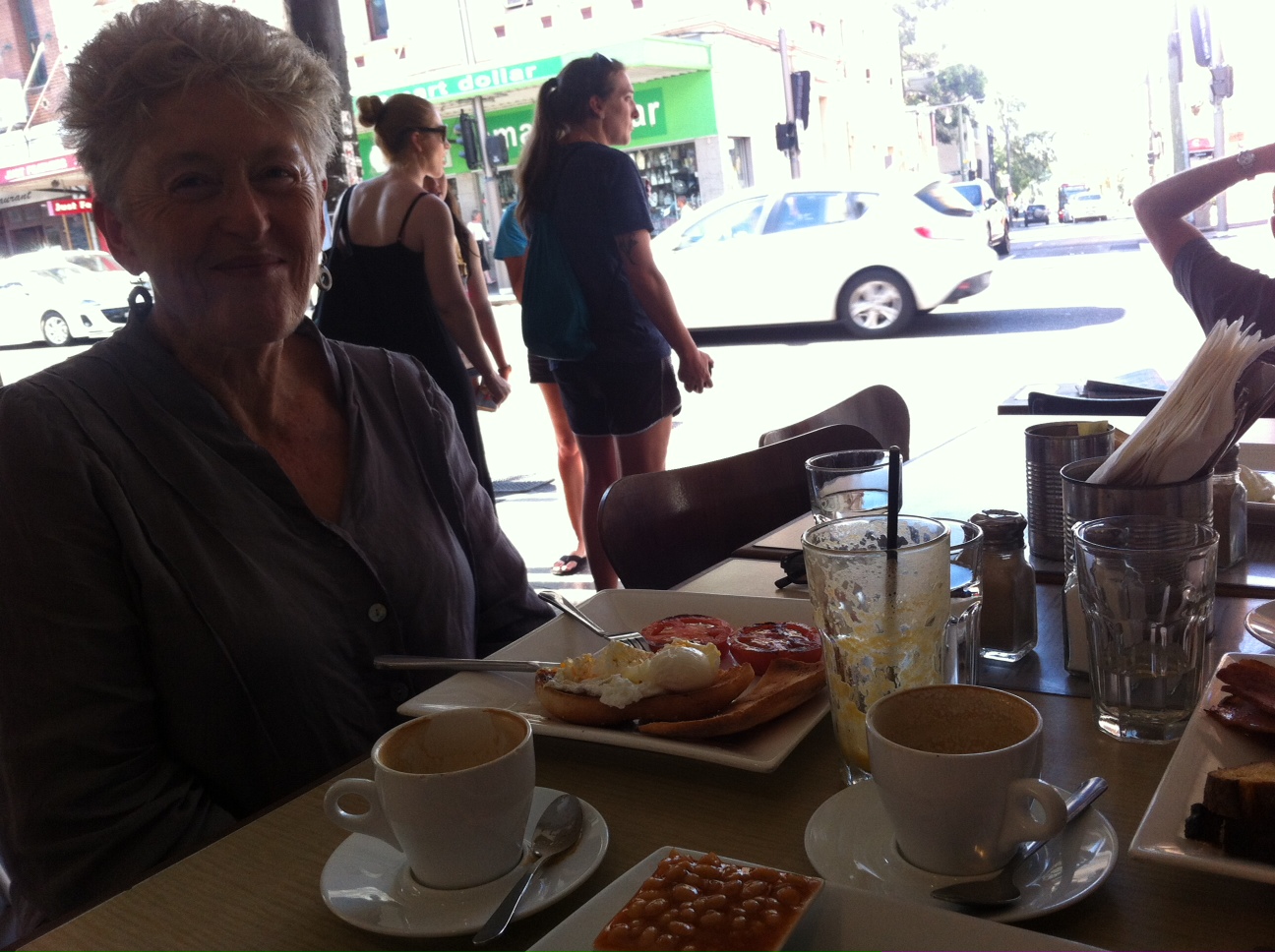 The Cafe Suite rules call for one of us to order the ‘big’ or ‘full’ breakfast option – often named after the cafe. However in honour of the imminence of St Patricks day I decide to put a slight bend in the rule and veer away from the Cafe C Brekkie in favour of the Irish Breakfast. This comes with beans, sausage and black pudding, as well as the usual eggs, bacon and toast, so I think that it still qualifies as a big breakfast. Strop selects the fritters with a side of bacon while Anna plays it safe with poached eggs and toast.

I have to say that I thought the breakfast menu was a bit boring. Lots of variations on the usual suspects, but nothing particularly adventurous or new. Or even interesting. But then we are still officially in the King Street doldrums, so what else should I expect. All the interesting and innovative stuff seems to happens just off King Street. It must be something to do with the rental agreements. 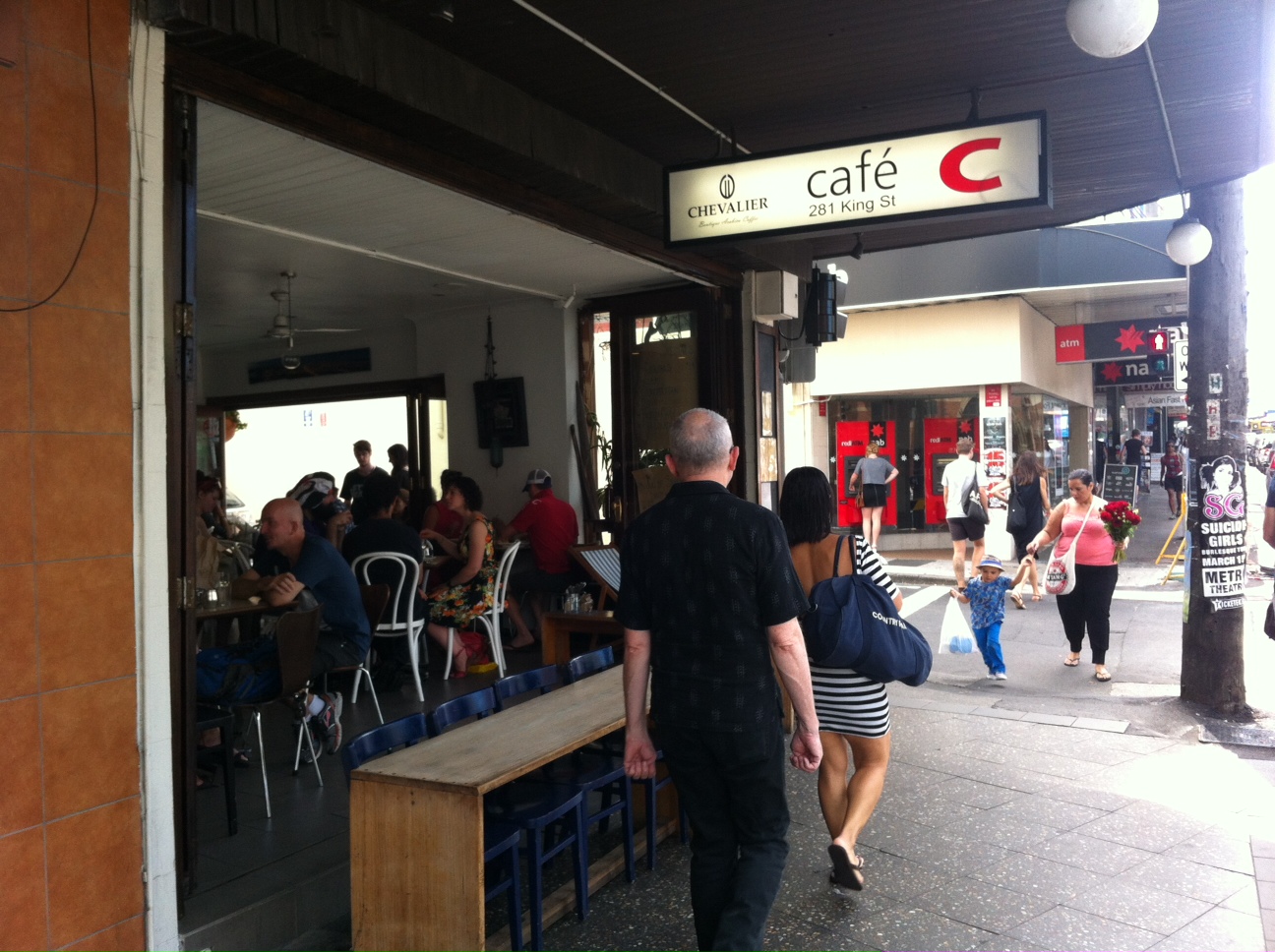 When the food arrives, the waiter is embarrassed to explain that when Anna said she wanted two eggs, and toast, he wrote 2 eggs and toast, and the kitchen cooked four eggs, and shared them between 2 plates. Commas, eh? They’re tricky little bastards aren’t they. Anyway he was too scared to take the extra plate back to the kitchen so he just left it there, on the end of our table, in case we got a bit peckish. We didn’t, although if there had been bacon involved it would have been a different matter. The breakfasts were alright. Nothing special but okay. As was the coffee. Strop thought her fritters were somewhat lacking in flavour. There was nothing that seemed to be home-made in my Irish Breakfast. The black pudding was nice enough, and the eggs were well cooked. It was a good breakfast but nothing to write home about. Or blog about I suppose. The orange juice was nice and orangey…

On the way home we bumped into the centenary celebrations for Newtown Fire Station. What are all these fire engines doing parked on the road, we thought at first. Then, ooh look, a brass band, we exclaimed. Who doesn’t love a brass band? That’s right: no one. 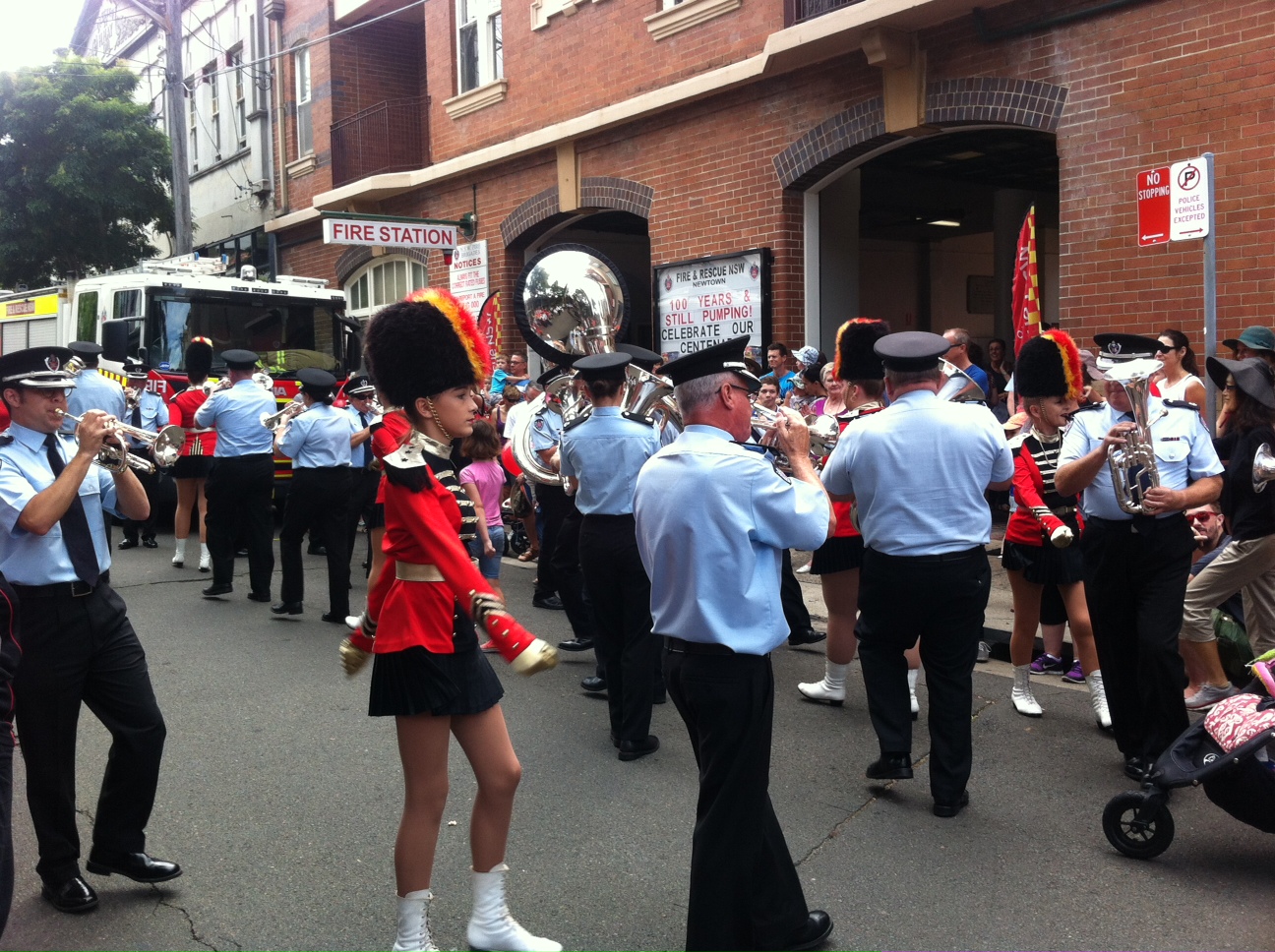