It is freezing and pissing down for our first post-Feej foray back into the Friday night food frenzy of King Street. We have arranged to meet first at the Marly – tonight we are joined by Rebecca and Duncan who are friends of Strop, but I have apparently met them once. As everyone apart from me is running a bit late due to Sydney’s public transport not being water proof, I get to sit at the bar and down a Dogbolter or two while reading more of the latest Phillip Kerr Nazi crime-thriller. When everyone makes it to the rendezvous, dripping from the deluge, we all have another Dogbolter (I have converted them) while Rebecca politely asks about our holiday in Feej. We tell her we are renewed and re-invigorated, getting a little bit breathless as we describe the sunsets, the snorkelling (Clown fish! Just off the beach, can you imagine!) the granddaughter time, the cocktails, and the lack of shoes. And what have you been up to Rebecca and Duncan, we innocently asked, walking straight into their trap. Oh, we’ve been off on a bit of holiday ourselves, South America, in search of the Lesser Fat-Tailed Armadillo. I don’t think that’s quite right but it was something like that – the shorthand is not what it used to be – and I was still coming to terms with the fact that there was more than one type of Armadillo. Then there was the quicksand adventure in which Rebecca is left to sink slowly into the sunset while the guide leads the rest of the party to firmer ground. And the Jaguars stalking the river boats, chasing off the crew. Did you know that the Jaguar has the most powerful bite of any of the big cats? No, I didn’t either, direct descendants of Sabre-tooth tigers, apparently. And of course Piranha, it is South America after all. No no, they’re only a problem in the dry season, when the river dries up, and they get trapped in a shrinking puddle – then they’ll strip you to the bone as quick as look at you. Our Feej resort vacation is looking a bit feeble in the face of Rebecca and Duncan’s episode of Bomba the Jungle Boy. Time for something to eat I think.

Luckily the restaurant is just next door. It used to be called Won Ton Noodle Inn, but somehow while we were not paying attention in Feej it became something called New Taste. This is just sad really, Won Ton Noodle Inn is poetry, New Taste is just a bad lifestyle magazine. Nothing else seems to have changed though, as far as we can tell from the outside. It’s not the sort of place you would normally go into unless you needed a really cheap feed and you weren’t too worried about the sanctity of your stomach. Street appeal is in negative figures here. New Taste has rejected the new-fangled trend for wide-open welcoming restaurant frontages that the rest of King Street has succumbed to. It looks like a hole in the wall, just a doorway and a lot of very faded pictures of the food on offer. Going inside is like going to a different country, a country called the past: they do things differently there. The kitchen is up the front, but there is a dining room out the back with a few small tables. Further out the back is a strange outdoor room with lime-green walls and white plastic tables that are bigger and which might suit us better The Staff suggests, pointing out that our group of 4 is going to stretch the carrying capacity of the tables in the main dining area. However, we decide to squeeze up rather than risk crossing the yard and getting soaked by the downpour and possibly never being seen again. I’m not trying to cast any nasturtiums here, but there was something about that back shed and those fluro-lit lime green walls and the lonely looking garden furniture that screamed NO! Don’t you do it, you’ll never be seen again, or at the very least your food will be swamped with inches of rainwater before it gets to your table. So we stayed inside.

Another strange thing about New Taste – it’s a 2 man band, or at least it was on Friday night at 7:45. This may have something to do with the size of the joint but probably has more to do with the operating margins. In case I forget to mention it, this place is very cheap.

First things first: wine. New Taste is extremely conveniently located next door to a bottle shop. I had hardly noticed Rebecca had gone before she was back with an entirely drinkable bottle of Pinot Grigio. We thought about asking for wine glasses but it really looked as if this might be a challenge for The Staff so we just drank it out of our little ceramic tea cups instead. We drank it fairly quickly too.

The Staff turned up to take our order with a biro and the back of a well-used envelope. Ordering the food took a little longer than getting the wine in. We ordered dumplings to start and a dish each but Rebecca is something of a part-time vego on account of being a full time animal-life-preserving person, so she wanted a vegetable dish to go with the meats and seafoods that occupied the menu, and that the rest of us had unquestioningly chosen. Rebecca had other ideas though, and wasn’t afraid to run them up The Staff’s flagpole. Unfortunately The Staff had other ideas too. Rebecca fancied eggplant. Ok, nodding and smiling from The Staff, he can do eggplant, how about Salt and Pepper Eggplant. Now, I would have given up the hunt at this point but not Rebecca. Well can you stir fry it, she said, maybe with some other vegetables? Broccoli? Sure, sure, fry it with little bit of batter, some salt, some pepper, you’ll like it. At this point Rebecca saw the way things were going, okaaa-ay then. What we got was Salt and Pepper Eggplant, and he was right, we did like it. We made the mistake of assuming we were still in Australia by ordering boiled rice for four. The Staff looked at us funny because he knew that in this country each dish comes with it’s own rice.

I have no memory of what the other dishes were, I know from the photos that peas featured in one of them, but they were all totally edible. The dumplings were very nice too, I do remember that. And it’s cheap, did I say that already? I mean really cheap, the dumplings and four dishes added up to a bill of $29. I would go again just for the pleasure of seeing the bill, but there is nothing wrong with the food, it’s just a bit unusual and on King Street that has to be a good thing.

Next up is a family outing to Tre Viet featuring the Outlaw. Can’t wait.

No news from King Street this week. But instead we bring you the first Off the Map report from Feej. Typed on the ipad, on the veranda looking out through the palm trees, past the Stropolina reading on the sun lounge, over the white sand and the lazy flopping waves to the smattering of snorkellers cruising up and down the coral reef about 50m off the beach. Hard to take.
We are here at Octopus Resort for a family holiday to celebrate the memory of the Stropmother who is now gone but whose memory lives on in a plethora of family legends, jokes, sayings and children’s songs. Having booked the trip on the interweb we were pleasantly surprised as we stepped out of our long boat, to find that it is even better than the photos. We are staying in a kind of 3 bedroom villa right on the beach. It is really 3 separate rooms connected by a long veranda. Perfect for the Pancetta to run up and down on her stiff stumpy legs. She steadfastly refuses to say bula, despite a hell of a lot of prompting from family and the locals.
The dining room here has a sand floor which feels nice on your bare feet but takes a little getting used to, as your chair sinks into the ground while you are settling yourself in front of the food. The food is charged at a fixed rate and there is a choice for breakfast and lunch, but dinner is a set menu. Which is fine by me, it is a relief not to have to make any decisions. Last night was a kind of seafood feast with prawns, fish with coconut 2 ways, ceviche, calamari, potato gratin, rainforest greens (I know, but it tasted fantastic) and a lobster bisque. We are busily exploring the drinks list too. Favourites so far are Fiji Premium on the beer front, and the local rum with coke (what coke should taste like according to Strop).
We are here all week so the investigations will continue, in between cooking lessons, fishing trips, manta ray viewing, and just sitting on the veranda watching all the boats that are constantly coming and going, ferrying people and things around the island.
So far Octopus is proving to be pretty damn good. 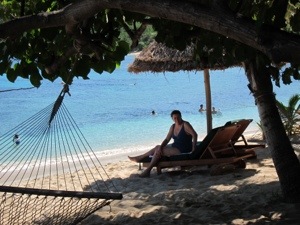