It’s Friday night, there’s a long weekend in the offing, and I need another beer. Those two Peronis before I left the office were never going to be enough.

I’m running early but as I said, I need another beer, and I’m sure Strop said Yenikoy had a bar. So I’m heading straight there, not bothering to stop at one of the pubs or bars on the way, because frankly, they’ve been a bit disappointing lately.

When I get to Yenikoy, 20 minutes early, the place is smattered with early diners. It is quite a big place, wrapping around the ground floor corner of a three storey, 1980s/postmodern brick residential atrocity. The restaurant makes good use of its location next to the school, with lots of outdoor spaces. Some friends have expressed interested in checking out Yenikoy with us, so we have a large table booked. Or we thought we did. Neither of the two notepads the restaurant uses, seems to have any record of us. Hmmm.

“How many was it for?” The maître d asked.

“Eight? I think,” I said, quickly trying to remember who was supposed to be coming, knowing that I should have paid more attention – but really, Strop’s supposed to handle all the social stuff.

So I sat outside and called Strop and sipped a nice cold Efes. That’s better, but there’s no answer from Strop. Oh well. The beer is very good. I wonder what’s happening on Twitter? Eventually Strop got back to me, confirming the numbers, sort of. The booking was for eight, but now we’re expecting nine.

“Sweet,” says the maître d, and a spare table for eight is rapidly transformed into a table for nine, and I settle down happily to wait, drink beer, and tweet. Wittily, of course, beer tweets are always witty. A carafe of iced water loaded with a sprig of mint arrives unbidden, and I’m having a pretty good time.

I have just succeeded in enticing @JohnBirmingham into following me – by saying I was reading his book and calling him a bastard – when everyone arrives. Well, Marie and Chantal, her sister from Canada, arrive first, followed soon after by Mark and a red faced Strop. She had just made a forced march from the Marly where she had been downing Dogbolters with a mate, and not paying attention to the time. She felt the need to do some sorting out about the reservation, despite the fact that I had negotiated a perfectly good table – we were back to eight by this time, Mark’s housemate couldn’t make it. As far as Strop was concerned there was a point that needed to be made. “I rang them on Monday…” she said as she disappeared in the direction of the maître d.

“She’s got her cranky on,” said Mark. 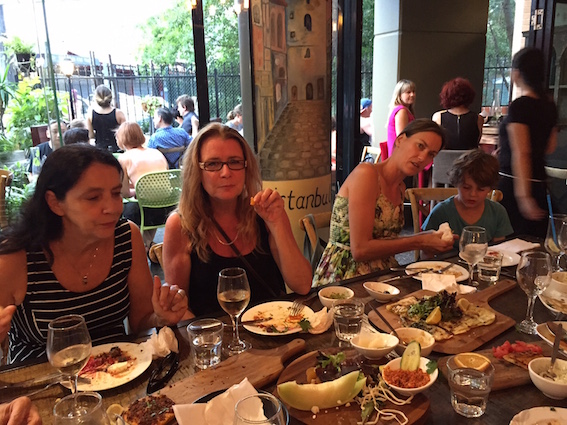 Eventually we got Strop settled down with a glass of water, just before Ashleigh, Paul and Ned arrived. Introductions were repeated, connecting lines drawn. Marie we’ve known since long past group-house days, Paul, Ashleigh, Ned and Mark are dog-park friends, who as Strop points out, have graduated to being real friends. Chantal is new to all of us except Marie, and luckily she turns out to be very nice, and very tolerant of the fact that most of us aren’t speaking French.

Some time later Strop noticed that we didn’t have menus. She deployed her eyebrows and one of the staff scurried off to fetch them. There was a lot of riffling of pages and I decided that I would leave the food ordering to everyone else and concentrate on the wine list, as my beer seemed to have disappeared.

After some rapid negotiations a consensus was reached. “We’ll have all the entrees, plus a cheese and spinach gozleme for Ned,” Strop told the waiter, after waving him over to her end of the table. Obviously he hadn’t realised who was in charge here. Going for all the entrees meant that we would get plenty of variety, the vege-aquarians would be catered for, and we could always order more if we needed it. The only possible drawback was that each dish might not extend to cover the eight of us. Fear Of Missing Out reared its ugly head – but once we were able to convey the concept of FOMO to the waiter he was able to reassure us. On the wine front we split down the middle between SauvBlanc and Grigio camps, so we got both. 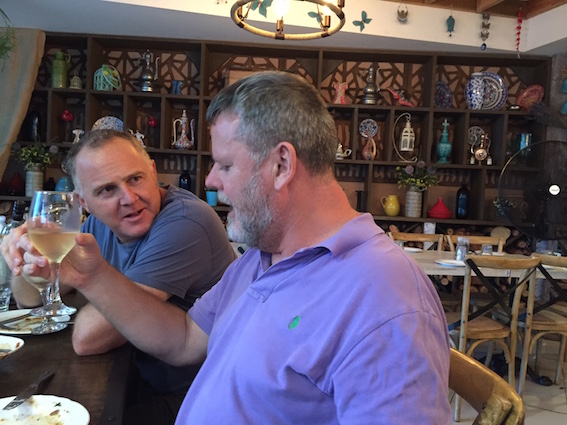 Then the food started arriving – and at this point I have to make a confession. Unfortunately I didn’t make any notes on the actual dishes, thinking, quite reasonably, that the menu was bound to be on their website, and that would be enough to jog my memory. It was a good theory and it meant I could spend more time talking about dogs new and old, children, the fact that Canadian French is the real proper French that the French don’t speak any more, and whatever other topics we talked about. I really must take better notes. Anyway when I checked the Yenikoy website, there was the Menu, right there at the top on the menu, but when I clicked it: Error 404. So I’m afraid we’re all going to have to rely on my memory.

First up there were dips, as you would expect, but these were generous serves in bowls arrayed on a board, and the bread was good too. The fried haloumi was excellent. There was a cold collation board with melon and a cured meet, fetta, stringy cheese that everyone thought was shredded cabbage at first. There were pastry things that might have been called ‘lady fingers’ – very crisp and tasty, eggplant stuffed with cheese, and another dish a bit like a ratatouille. And of course Ned’s gozleme, which I don’t think he saw a lot of. There were probably a few others in there as well, but it was all pretty good, tasty and crisp when it was supposed to be. The only disappointing dish was the little pizza things that included meat so unfortunately there were plenty of them for the carnivores among us. We had to ask for more bread a couple of times, and Mark was disappointed that although his display of Turkish language skills delighted the waiter, it didn’t bring the bread any sooner. 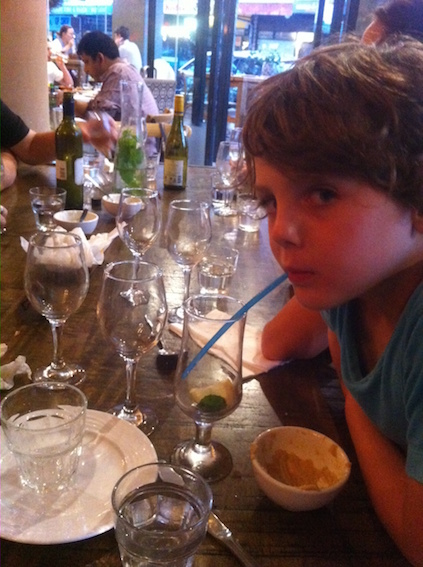 When it came time for dessert it was clear that Ned had his eyes firmly fixed on the display of Turkish Delight and bakalvas at the front of the restaurant. The rest of us decided to follow his example. We trooped up to the display and picked out the variety of sweet, nutty pastry that most called out to us. There were a couple of dessert type innovations too: choclava and whiteclava. Some amongst us thought these were abominations, without actually trying them. The braver and more progressive of us thought they were interesting but that the traditional baklava won hands down. And the coffee was excellent too.

Out on the street, we had to get the customary group photo. This is traditionally done by accosting a passer-by and embarrassing them into taking the shot. Mostly it doesn’t take much convincing – young people are always happy to help the older generation make fools of themselves. As we formed ourselves up across the footpath, an arm extended itself from the restaurant, and one of the waiters took a photo of us being photographed. I’m hoping we’ll appear on their website, but maybe we’ll just be an Error 404. 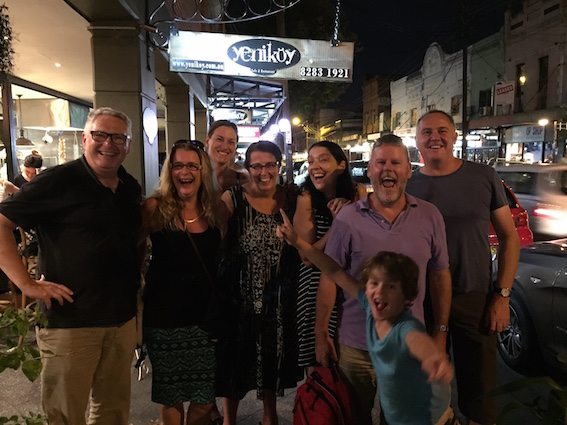