I’m sold. This place is great. Perfect eggs. Good coffee. The orange juice was freshly squeezed. A nice bright space with plenty of spare room on a sunny Saturday morning. Quiet. No canned music. What more could you want for your weekend breakfast? Service? Sure, just the right amount of care and attention dished up by friendly and efficient staff. Now if they could just spell their name right.

What else? Company. Our breakfast companion was Mark, a long standing PTB stalwart (Painting The Bridge is officially going all acronym now – it makes it look like everyone is saying the name so often that there would be a drain on national productivity if it wasn’t shortened). 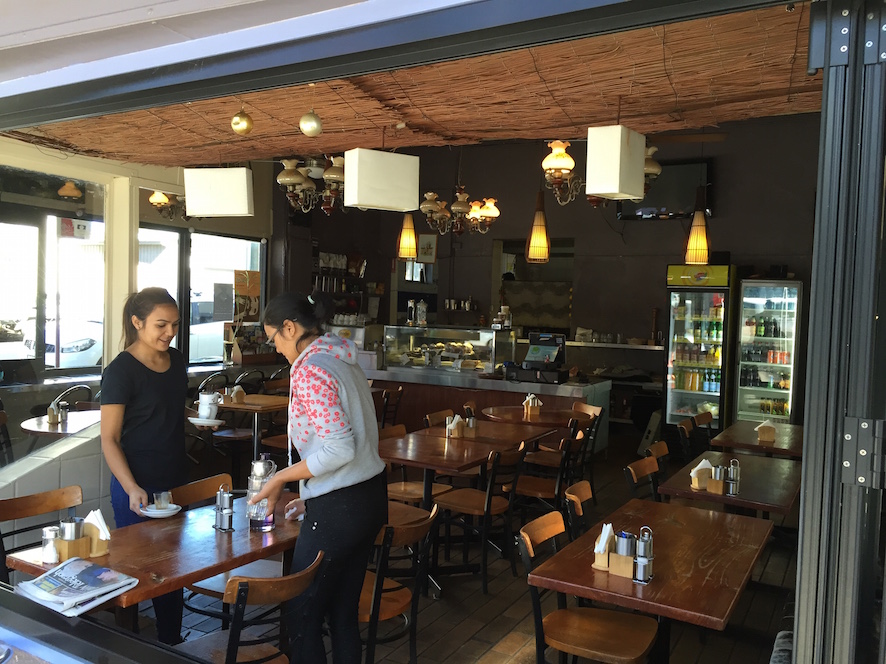 We don’t see so much of Mark these days as he is currently dog-less and thus not a regular companion on the circuit around the park. So it was good to catch up. Good to talk about neighbourhood things like “Did you see what they’re doing to the bowling club?” and “What do you reckon your place is worth?” “That much? Really?” and “How’s your new house mate working out?” All that.

Mark drove us to The Gallaxy as the quest frontline has advanced so far that we almost need to take a packed lunch for the trip if we’re walking, and Mark had to rush off for a hairdressing appointment after breakfast. It was a perfect morning, sunshine, more parking spaces than we could reasonably use, and lots of smiling faces wandering about checking out the glory that is Newtown. There were a couple of people sitting outside when we arrived but plenty of room inside. We took a window table looking out onto the passing parade of pedestrians. There was a lot of traffic on the street and a lot of motorbikes. Presumably the sudden outbreak of sunshine had tempted a lot of two-wheelers out of their garages. Unfortunately, they all seemed to be Ducatis making slow but noisy progress through the King Street traffic jam. Oh well, at least they’ll be able to find a decent coffee. 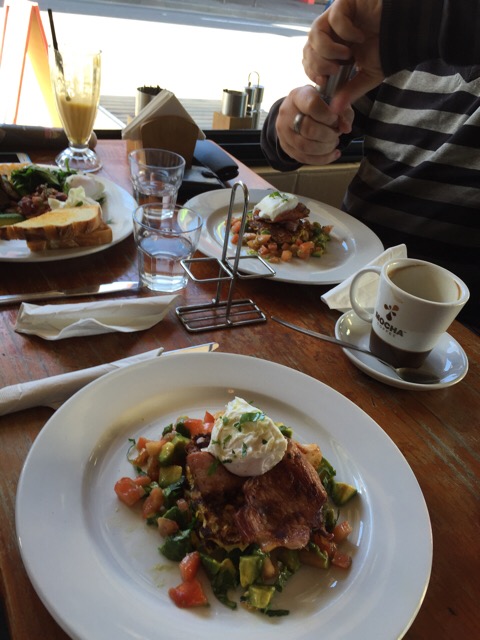 We decided it must be Strop’s turn to take on the Big Breakfast, although she did side step the challenge slightly by going for the vegetarian option. I was half expecting her to order a side of bacon, but no, she played it straight. Mark and I went for the corn fritters. Having had my first choice gazzumped at our last breakfast outing, I decided that going with my gut instinct was more important to my gut than any concerns about doubling up.

The corn fritters were really good, coming with a kind of avocado and tomato salsa, and topped with bacon and a poached egg. Strop’s Big Vego Brekkie was full of tasty but unmeaty morsels, but she singled out the mushrooms for special note. They were perfectly cooked and had that buttery dry melty thing going on.

Our noshing and catching up was only interrupted by a phone call to Mark from his hairdresser wondering where the bloody hell he was. Oops. Got the time wrong didn’t he. You don’t want to do that too often with a Surry Hills hairdresser, you’ll get sacked.

Afterwards, now that he had nowhere special to be, Mark accompanied us to the button shop where Strop was on a mission to get some nice buttons for her new green winter coat. As Strop homed in on the heritage listed genuine vintage green buttons, Mark came over all helpful and fashion conscious, pulling out orange buttons, and yellow. “What about these? Or these? You want something that really pops. These red ones are nice.” It was fascinating, like watching a child skating out onto the thin ice of a lake, ignoring the cracks forming beneath them. As Strop’s smile got thinner, I realised it was time to distract Mark before he plunged into the icy waters. While Strop and the shopkeeper chatted about the historic origins of her chosen buttons, and how she should buy a few spares as they were irreplaceable, I gently pointed out to Mark that Strop rarely needs help choosing haberdashery. Basically, your button store, or indeed your sewing or knitting store, is a female domain, their equivalent of a hardware store, and really, we’re very rarely of any use in that environment. 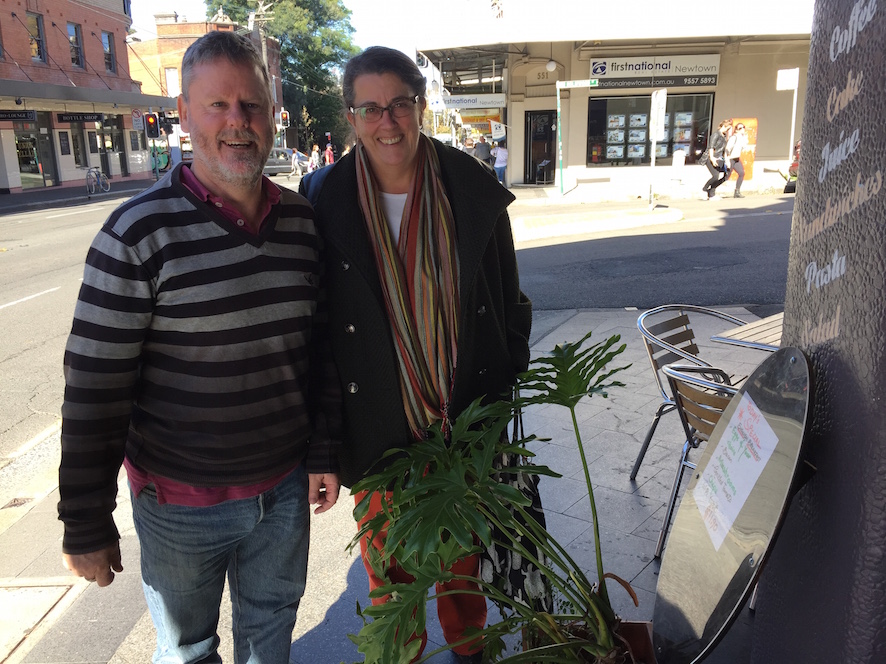