It turns out that Pashas has been around for a long time. Matt (of Jim and Matt fame) can vaguely remember going there when he lived in Newtown as a student. That was in the olden days when Newtown was really Newtown – what I think of as its dog shit and broken glass period. But I digress, Pasha’s is an institution and to have lasted so long in Newtown’s constantly changing restaurant landscape, it definitely must be doing something right. Certainly the use of tiles in the façade speaks of permanence and a disdain for fashion – as well as making it a bit of a landmark. Which is just as well because I am running late again – Newtown Social Club and Summer Ale late – and I don’t want to end up on the wrong side of the road.

Strop and Jim are ensconced at a window table when I arrive, tucking into baba ganouj, and bread and washed down with Efes beer. I have no choice but to join in. Matt is running even later than me, but I think he had a better excuse – something work related. Having broken the banquet barrier last week at Arabellas we decide to give it another go. It also makes ordering much easier and leaves more time for nattering.

For some reason I end up doing the ordering again. “Four of your best banquets please squire,” I quip to the waiter, “and another round of Efes, while you’re about it.”

“And a bottle of pinot grigio,” Strop adds.

Matt arrives just after the beer but before the dips, which turns out to be a fairly narrow window. The dips are served on a big platter, and they are generous and varied. There is more baba, hummus of course, chilli and walnut, cucumber and yoghurt, spinach, and carrot. Along with the dips, are eggplants, grilled zucchini and a salad with pomegranate. As usual the bread runs out quickly, but it is rapidly replenished. With our food cravings being quelled, we get back to the chatter. This includes, in no particular order: anthem singing antics at Jim’s school, Matt’s chaos over colonial barrack design, Strop’s acting-up anguish, and my gateway feature fiasco. For some reason we then drifted into an erudite discussion of the best place to buy soy-burgers in the 1990s, and also something about ‘Dixie spoons’. At least that’s what my notes say. No, I have no idea either – thankyou Mr, or Ms auto-spell.

Pasha’s has a good atmosphere with plenty of décor-ey bits and pieces including low hanging coloured glass lanterns (below head height as it turns out), and travel posters. It is a double-wide, occupying two shop fronts, separated by brick arches. There are low tables for those with ambitious knees, and some high tables for the rest of us. Tonight it is buzzing with plenty of punters and lots of Friday night conversations.

When the sound of happy dining is suddenly shattered by blaring music, I assume that it is a mistake and that the volume will soon be adjusted. But my optimism is misplaced. The music heralds the arrival of that scourge of middle aged white men, The Belly Dancer. An apparition in blue arrives between the tables, with a smile set in red concrete, and belly rolls that won’t stop rolling. A discernible tremor of terror spreads from table to table, as each man realises what this means. Yes, audience participation. Our table is backed into a corner with no means of escape, but luckily it is also the furthest from the threat. Perhaps the music, or the will to embarrass, will run out before she gets to us. But no, conversation is suspended as she gradually gets closer, leaving behind her a trail of bewildered and embarrassed men, and a couple of women who really got into it. When she gets to our table she quickly works out that Strop is the only one there who might have the courage to take up the challenge, the terms of which are being laid out in great detail, by the mesmeric undulations of the her navel. Not tonight though, Strop isn’t in the mood.

As she lifts her gaze to the rest of the table, I take a sudden interest in making sure that I am getting down complete and accurate notes. I don’t know what Jim and Matt do, but it works. The dancer turns away, vibrating imperiously, and obviously disgusted that none of us is man enough for her.

When the music ends, normal transmission of conversation gradually resumes as a rush of near-miss euphoria takes over the room.

So what’s the verdict? We have been having a bit of a middle-eastern sojourn lately. I think that Pasha’s has easily the best atmosphere of all the Turkish and Lebanese restaurants we have been to on the quest – a very pleasant buzz. On the food front it is a near run thing, but Arabellas clarity and complexity of flavour, probably wins.

Next week we’re going African! I have no idea what to expect. 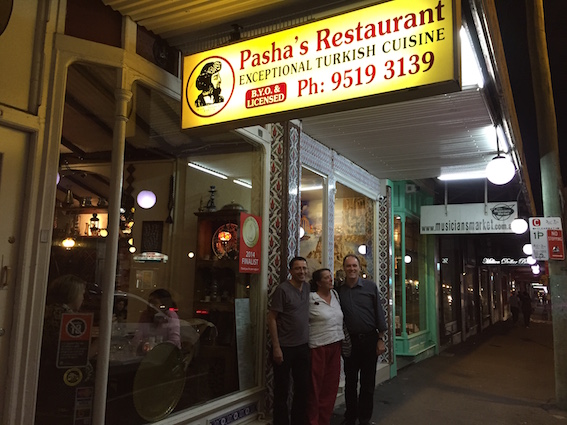