On Wednesday we successfully slotted two old, independent-minded, and beloved wrinklies into the Aged Care Machine – for what we presume will be the terms of their natural lives. This is what happens in our world when you outlive your ability to be independent.

It had been a rush, because when two slots open up in adjoining rooms in a well-run and easily-accessible establishment it is best not to fuck about. Those kinds of planets don’t always align so neatly. And even though it has been a stressful time, I am grateful to live in a country who’s citizens can expect to be looked after if they manage to live long enough to need it. We are lucky to have an Aged Care Machine, even if it is a bit clunky and ponderous, and to have a government that subsidises quality aged care for those who can’t afford it. I am also grateful to the lowly paid immigrants who look after the well being of our elderly, and really do seem to care. I don’t agree with Bronwyn Bishop on many topics but I do appreciate what she and her public servants did to change Aged Care in this country.

Okay, enough self-indulgent posturing – let’s get back to business.

The parental move was at short notice and was jammed hard up against a planned outing to King Street. We thought briefly about postponing the outing but decided that we were probably going to need a beer and a curry by the time the day was over. This was a correct prediction.

It was meant to be a quiet dinner, a chance to farewell Monica before she flew off, back to pommieland – just in time for winter, but when we got to the Coopers Hotel the party had expanded somewhat. There was Strop and I of course, my brother Steve (in town for the wrinkly relocation), Roy and Jill (last seen at Thanh Binh), Jill’s sister Monica (soon to depart our golden shores), John (previously seen at Kammadhenu and Thanh Binh, and fast becoming a groupie – or possibly a stalker), the Newlywed and the Newlywed-ette. After a quick beer, during which John informed me that he was planning on getting extremely drunk in order to give me something to write about, we set out on a brief safari towards Tamana’s.  As our safari straggled along the footpath, I wondered if perhaps we should have booked but there was plenty of room at Tamana’s North Indian Diner. 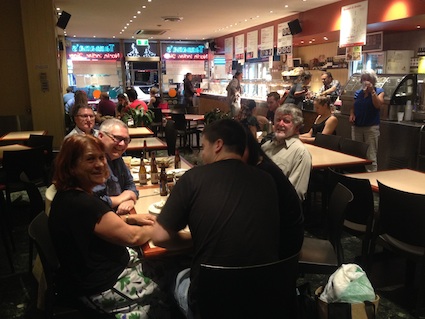 Tamana’s has always seemed a bit of a strange restaurant to me. There is no attempt to fashion an intimate dining experience here, no candles or mood lighting. There aren’t even any waiters. What there is, is a big dining hall with a food counter loaded with curries along one side. This is where you order and pay for your food. Tamana’s lies at the cafeteria end of the dining experience spectrum – exactly as the name suggests.

We made our way to the back of the room and dragged a couple tables together. Someone said “Let there be food.” Someone else said “Let there be beer first,” so the Newlywed offered up his credit card as hostage against us doing a runner. “Won’t do them any good,” he said returning to the table loaded with beers, “It’s already maxed out.”

Strop, Jill and Monica took on the food ordering role, and because the food is already cooked, the table was immediately covered with curries, rice, and naan. The Newlywed-ette informed us that she had never really been a fan of Indian food. Not because it was too spicy (she’s Korean and used to chilli), it was more that she hadn’t had the opportunity to try  many different types. Well tonight’s the night said the Newlywed who was keen to convert her, as he is a big fan of the curry.

Plates and conversation topics were soon circulating around the table with lots of enthusiasm but very little coordination. And even less note taking on my part. Steve took up John’s idea of helping me out with writing topics. He quizzed the proprietor about the significance of the artworks and began interpreting the religious symbology, even finding out the names of the Hindu deities that were hanging around on the walls. Sometimes I think Steve listens to too much Radio National. Frequent readers of the blog will understand that facts have a very short half-life once I get hold of them. I just nodded and kept eating. The conversation veered like an out of control Segway from Hindu iconography to Fred Nile, and then on to The Greens post-election shenanigans. At this point Steve looked up and pointed out the large number of security cameras and everyone paused to check their handbag. We didn’t want another Good Friday de-funding event.

About this time several people noted that the food was good, and how about another round of beers?

The vibrancy of the increasingly tasty food scene in Parramatta bubbled to the conversational surface (Strop can’t help herself) but quickly morphed into a discussion of the consternation expressed by the Church Street Mall derros and druggies when regular citizens turned up and started enjoying themselves en-masse at the recent Parramatta Masala festivities. Another round of curries was required at this point and the Newlywed-ette, having declared herself a curry convert was sent off to the counter alone. It was a test that she passed with flying colours when she returned with the hottest dish of the evening. While sweat seeped from pores and noses ran, the Newlywed-ette tried to explain the presence of a huge-bright-green-furry-irish-joke-hat in her handbag. It was apparently a prop for an up-coming Eurovision-themed works outing at the Horden Pavlova. The Newlywed then began coaching his beloved in the art of the Irish joke.

As we began to disentangle ourselves from our chairs and migrate towards the street, John declared that he had failed completely in the simple task of getting drunk. And that it was the fault of the beer.

It was that kind of evening.