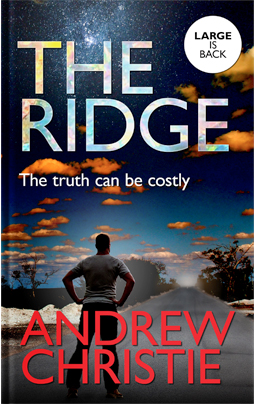 When you’re on the run, nothing is as dangerous as a familiar face.

Hiding out in Thailand, ‘Large’ Phil Waters learns of the death of his first girlfriend. As teenage runaways, Large and Lizzie had survived on love and loyalty. But when the stakes became too high Lizzie sought safety, leaving Large to wade further into a life of violence and crime.

Now, Lizzie’s daughter, Carmen, is struggling to come to terms with her grief. Inheriting her mother’s home in the opal-mining town of Lightning Ridge, Carmen discovers how little she knew about her mother’s past.

Putting aside their mistrust of each other, Large and Carmen try to unravel the mystery of Lizzie’s life and death. But it’s complicated: Carmen wants an end to all the lies, but for Large, truth is a dangerous luxury.

This gripping mystery thriller takes readers into the dark heart of the outback.

You can read the first chapter of The Ridge below and you can buy it at these retailers.

The night after the Melbourne Cup

Everything is different, but still the same. The sky. The dirt and heat. All the same.

His only working headlight pointed off to the left, flickering across cypress scrub and occasionally flaring in the eyes of an animal. Large drove slowly, hunched forward, following the edge of the track. Beside him a miniature dachshund slept on the passenger seat, neatly curled, nose to arse.

When the white mullock heaps of an opal field appeared among the trees he let the campervan roll to a stop. The engine paused and tripped unhappily. He killed the headlights and let his eyes adjust to the dark. Sharon sat up to look around. Large reached across and caught a velvety ear between his fingers. In return he got his hand licked.

He wiped his fingers on his shorts and wound down the window to let out the smell of hot oil and exhaust. It was cool. No lights. A sliver of moon was crowded by too many stars. The clock on the dash said 3:07. Then 3:08. Sharon nudged his arm, prompting another pat.

Large put the van back in drive. Peeling off the track, onto the red earth, weaving between slumped mounds of clay until he found a pile bigger than most. Beside it, a sagging wire fence enclosed the mouth of a mineshaft. A spoil heap this size meant a deeper hole—it stood to reason. He shut off the engine. Sharon stood and stretched, a quiver of excitement working down her body.

The fence was a token effort, and the square of rusted steel mesh over the hole lifted off easily. Opening the side door of the van, Large was greeted by the soles of a pair of tooled-leather cowboy boots. In his western-cut jeans, fancy belt, and embroidered shirt, Gazza Evans had died as he lived: a cocky, cowboy cunt.

Back when Large knew him, Gazza made his living pimping young girls, slinging speed, and hurting people with boiling water. More recently, right up until he met the front of Large’s van, he’d been couriering ice shipments around the countryside. The cowboy clobber had always been bullshit—Gazza grew up in Tempe—but it used to impress the girls at Central. Runaways straight off the train, falling for Gazza’s fake cowboy charm.

Gazza slid out of the HiAce and into the ground like the turd he had always been. A distant thump and a shower of gravel announced his arrival in the underworld.

Large replaced the mesh and restrung the fence wire before sweeping away the footprints and drag marks with a piece of brush. Not perfect, but all he had time for. The ground was hard and dry. A couple of windy days would take care of the tyre tracks.

Back in the van, he gave Sharon’s head a rub and reached for the key. The starter motor whirred, stopped. Whirred again.

“Don’t be a bastard.” His sweat-covered face shone in the glow of the dash. He had already been here too long. “Come on, you fucker.”

He punched the roof and the window beside him.

“Fucking start, will you.”

More whining. Another cough, then a catch became a sputter.

He gave it gas, coaxed it to a growl.