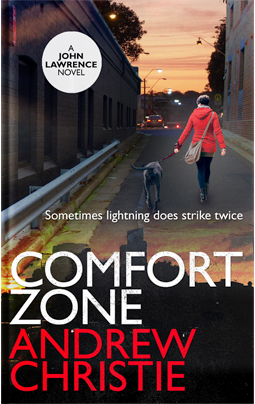 Already dealing with the aftermath of death and betrayal, Rae’s life is thrown into crisis when her neighbour is murdered. She wants to know who killed ‘Smokey’ Joe Whitmore and why.

For John Lawrence, Smokey’s death is an affront to the natural order. Smokey was a brother. A warrior who shared John’s pain and scars. He deserved to die fighting, not trapped in his wheelchair.

But Smokey was a man with secrets. Despite losing his legs in Uruzgan, he established a successful business. If you wanted something dangerous, and had the money, Smokey knew where to get it.

Now his business partners want to know what happened to their money and weapons. They don’t care who gets in their way.

Can Rae and John avoid getting each other killed while they pursue their own leads? At least long enough to find out who killed Smokey?

Here is Chapter 1 of COMFORT ZONE