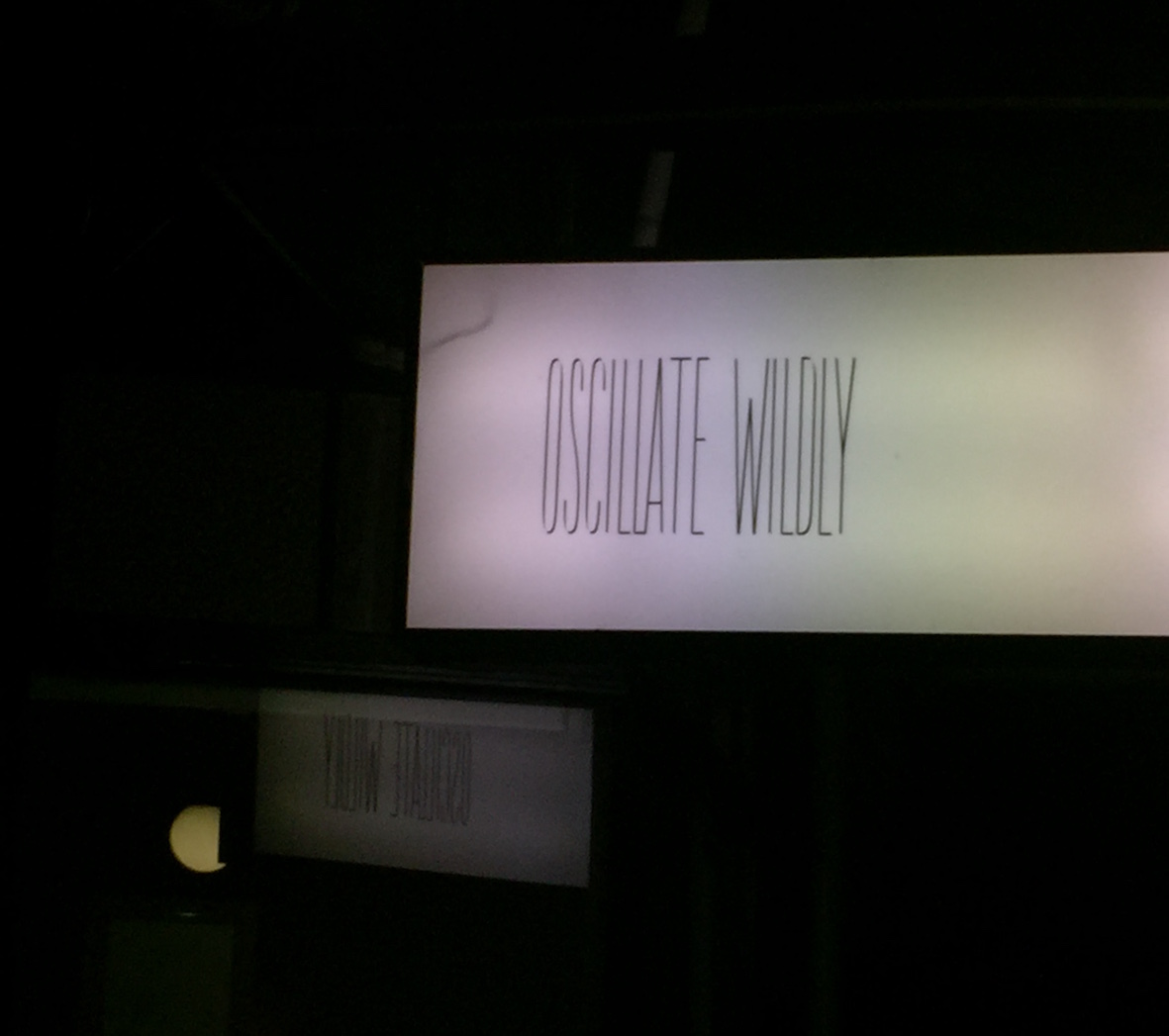 We visited Oscillate Wildly on Melbourne Cup Tuesday, in the midst of the Festival of Andy’s Birthday. Given the usual shenanigans that mark Cup Day at his workplace, I’d made a special request for him to stay sober, at least until we got to the restaurant. And give him his due, he’d tried to comply.

There were three of us including the Stropolina for the celebratory meal. Andy and I had enjoyed a meal at Oscillate Wildly years before, also for a birthday treat, but under a different chef. So we were definitely due for a re-run. The room is still a small shopfront, the ambience sparse, crisp and calm. The noise levels are low, partly due to the baffling on one wall. Other restaurants please take note.

There are very few choices to make – the degustation, or the degustation with matching wines. Simple. Because we were celebrating, we decided to forego our normal cautious Tuesday approach, and instead opted for the matching wines. Stropolina, encouraged our choice by saying she was old enough now to start learning about wines, so it would be an education for her, and probably tax deductible. It was one of only two decisions we had to make that night, and it turned out to be an excellent choice. 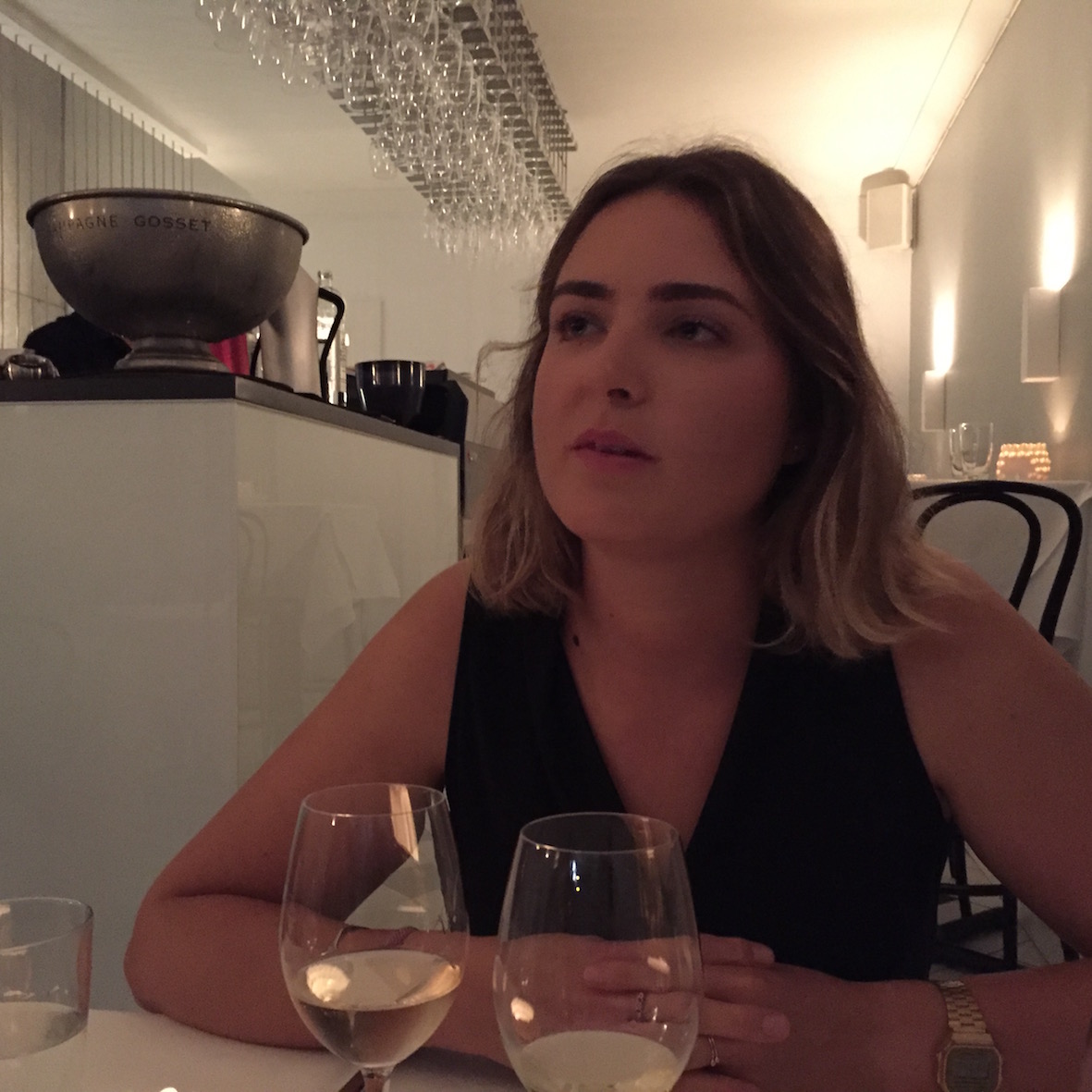 When I had rung to make a booking the previous week, there had been a gentle interrogation about our food preferences, designed to tease out any issues before our arrival. I took the opportunity to ask where they sourced their meat, and was assured that all the animals we would be getting stuck into had lived happy, free-range lives. Tick that box then. Were there any other allergies or intolerances they should know about? No, I said, we eat everything… What about foie gras? Oh, well thanks… no we’d rather not (we’ve seen those images of geese being force fed). It was an excellent way to pre-empt any possible embarrassing situations and ensure things went smoothly on the night.

None of us really knew quite what to expect from Oscillate Wildly. It had been good the first time, and we’d heard positive things about it since, so we were certainly up for a culinary adventure.

It was terrific. By the end of the evening, we were all agreed that it was the best meal we had ever eaten. The textures, the flavours, the combinations and the matching wines couldn’t have been any better. They even included my favourite vegetable: celeriac.

Let me take you though the courses.

First we were treated to an unusual gin and tonic – a favourite when it is in a glass, but this was in a sliver of sugarcane. The waiter told us that to do it justice, we had to suck and chew the sugarcane, but not eat it. He reminded us how we treated paddlepop sticks in the summers of our youf, though I don’t remember Streets making a gin and tonic paddle pop.

The G+T was accompanied by the lightest and crispiest bit of pork crackling dusted with sumac … mmm, crunch.

Then came Scallop, Apple, Potato. It was those ingredients and some more (sage jelly, I think) diced to the tiniest tasty cubes. So many tiny textures too.

Asparagus, Pollen and Gouda had to have some explanation – what is bee pollen anyway? And how many bees are killed in the process of collection? It’s the unused yellow swags of pollen left on the flowers by the bees apparently – and we have it on good authority that no bees were harmed in its collection. I’m still a little dubious, but it did add a dash of sweetness to the spring vege’n’cheese.

Throughout the meal we had wonderful rambling conversations; punctuated by gasps of excitement, as yet another beautiful dish was placed in front of us, and murmured thankyous for each new glass of wine.

The next dish is the one that Birthday Boy is still talking about: Corn, Polenta. It was a treat, and he could have eaten a giant bowl full of the really tasty, really creamy corn. With no discernable polenta – which suited me.

Fish next: Whiting, Radish, Ink. The whiting was crisp on the skin side and melty on the flesh side with a gentle flavour. The radish did its thing and the squid ink was black. The combo was delicious.

Throughout our meal the restaurant filled up, but the good acoustics meant it was easy to hear each other. It was almost as though we were the only ones there.

Pork, Mille Feuille moved us to the first meat course and the first red wine. And it wasn’t just any mille feuille, they were celeriac feuille and they perfectly matched the flavour-packed cube of pork.

It may seem as though the food was a bit of a rush, but everything was perfectly timed, we had plenty to talk about, not just the mouth-watering and beautifully presented food, but a range of scintillating family matters too. Throughout the meal, the two waiters kept us hydrated with tap water and a half glass of wine with nearly every new plate. It was wonderfully civilized.

We were nearly 2 hours in when we were told about an optional cheese course – and… well, Birthday Boy decided there should be no stinting for his birthday. Maybe later, but not today, so yes please, hit us up with the La Mothais, Buckwheat, Honey. Mmmmm, I can still feel the textures in my mouth, meltingly soft goat cheese, crunchy buckwheat and rich honey in a perfect combination.

Next our taste buds went to another place entirely with Pineapple, Lime, Bitters. It was tart and tasty. Pineapple foam floated over lime sorbet, doused with bitters. It was worth savouring every skerrick.

The almost final flourish was Burnt White Chocolate, Miso, Sesame. It came with accompanying sake. The sweet, salty, burnt, crunchy combo may never be beaten in the perfect pud stakes. Who knew miso could even be pud? Karl Firla (the chef), that’s who!

We had tea/coffee and chocolatey petit fours to finish with an accompanying birthday boy candle.

The deliciousness and pace of the meal with its matching wines had wooed us. Days later we are still quite sure that our weekday excursion to Oscillate Wildly provided the best meal we have ever eaten.

Plan a visit for a very special occasion – or even just a birthday! 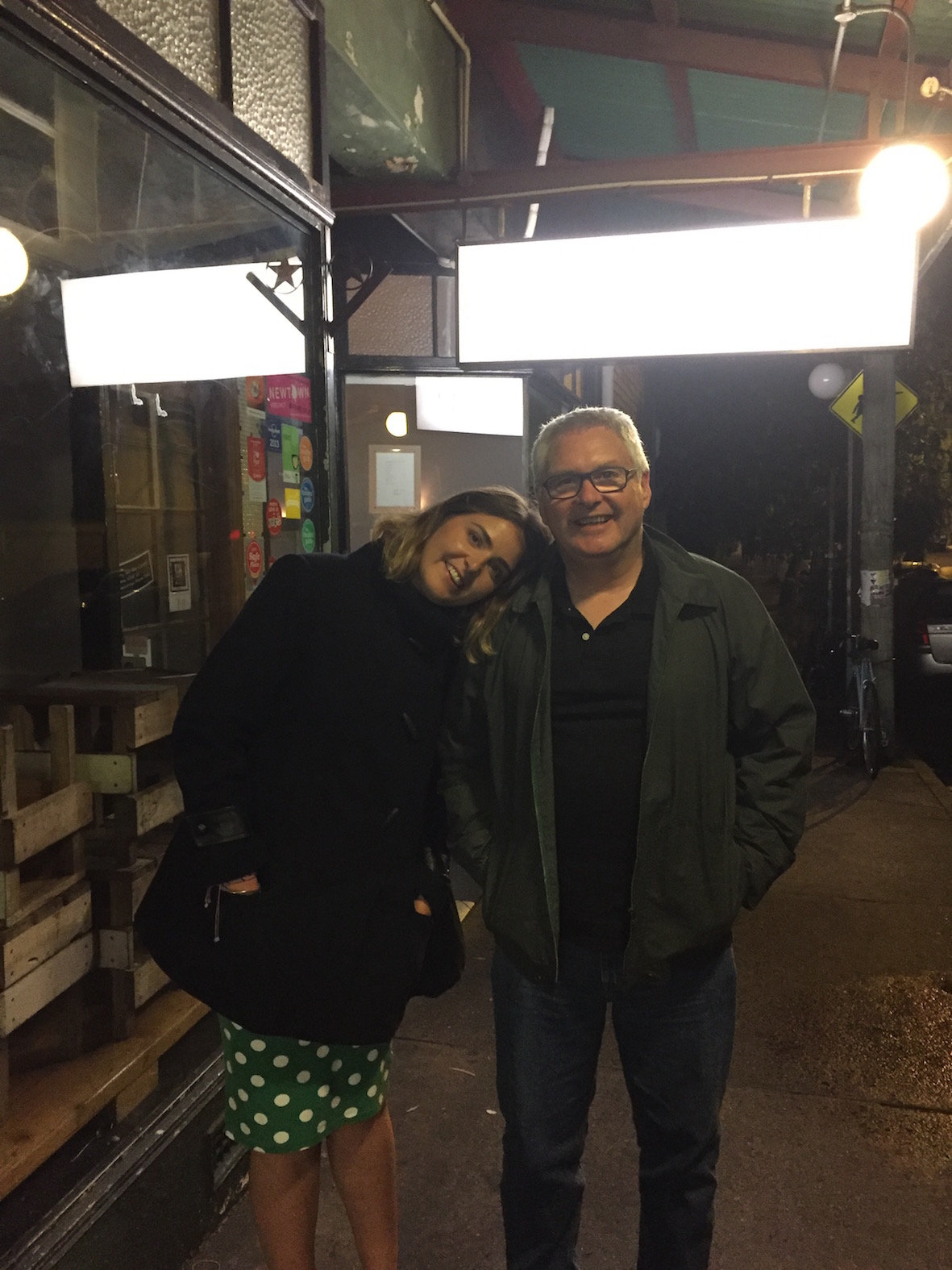