It’s Saturday night and it’s cold and Painting the Bridge is on the prowl for some fresh Thai. And to give Number 37 it’s last ever official Quest outing (until we start repainting the bridge). We’ve been walking past Ladda’s ever since getting the train to St Peters, rather than Newtown, became a more efficient way of questing. Ladda’s window display of fresh ingredients, waiting for their turn to be called up for some wok time, has always been appealing. I wonder why more restaurants don’t do this – it certainly advertises the freshness of the made-to-order menu. 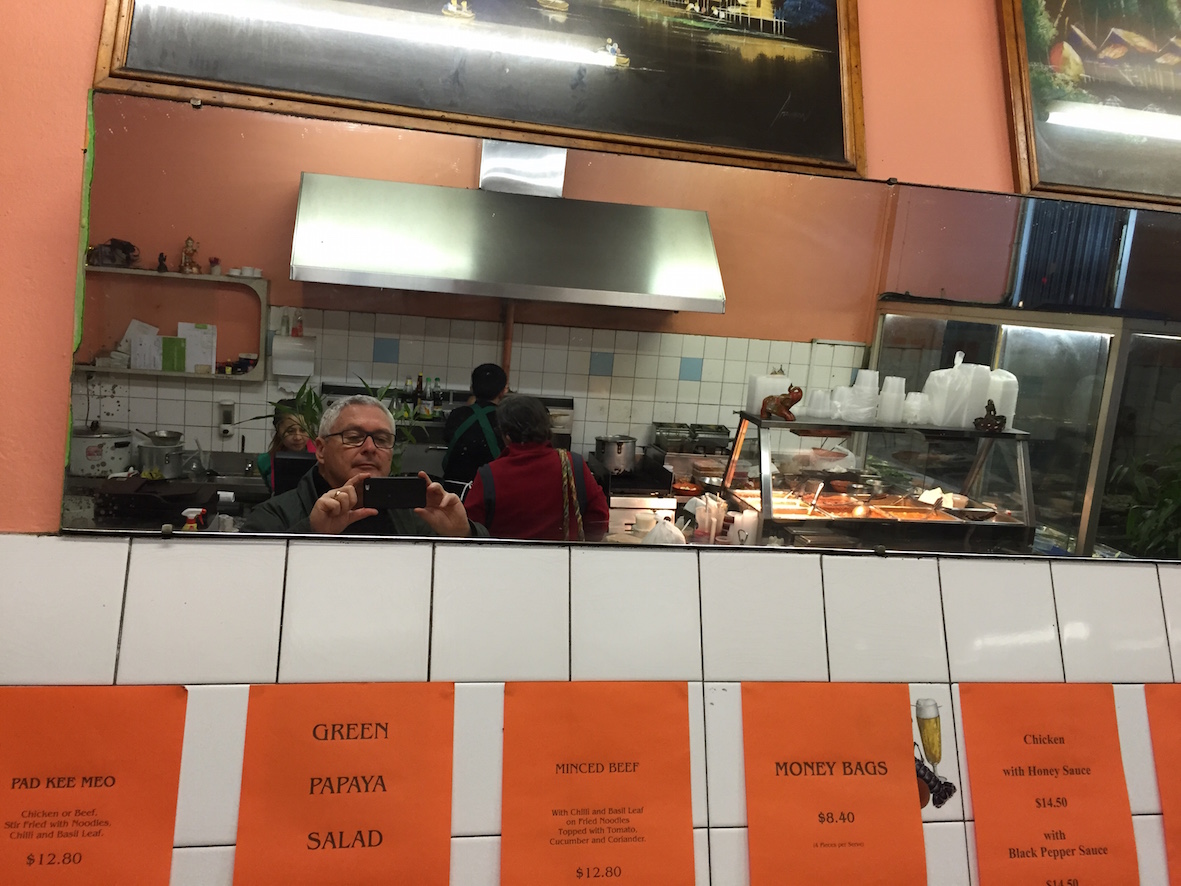 Tonight it is just Strop and I, in an unscheduled outing. We were supposed to be away this weekend but had to cancel those plans as I have had the flu all week and didn’t feel up to driving for hours down to the south coast. Mind you, walking to Ladda’s takes nearly as long, and it’s is a cold night so it is a relief to eventually step into the bright fluorescent lwarmth, and to have our nostrils filled with foody aromas. The staff are mildly surprised, and a bit amused, by our desire to eat in rather than take our food away. Judging by the array of old newspapers spread out on the tables, the shopfront is mainly used as a waiting room for takeaway pickups rather than dining. There are lots of tasty-sounding specials pinned up around the walls on bright orange bits of A4 paper, and plenty of vegetarian options. The soft-shell crab immediately grabs Strop’s attention and I am drawn to something ducky – in this case the salad. We already have our hearts set on these before we remember that we have to include Number 37 in our calculations. Oh well, three mains, it’s a bit like having two mains and a couple of entrees, I suppose. Number 37 turns out to be lamb with green beans. For drinks, we each have a bottle of ginger beer.

Ladda’s has their kitchen up front, occupying half the shop, so you get a good view of the wok work and plenty of sizzles and smells. All the time we were there, the telephone orders kept coming in and the takeaway orders kept going out. It’s a popular place with the locals, and when our food arrives it is easy to see why. The servings and the flavours are generous, and there are plenty of fresh, crunchy vegetables. The lamb and beans are a bit of a hit, tasty, crisp and hot, possibly the best Number 37 ever. The roast duck salad is also very good, although given how cold a night it is we might have done better with a duck curry. The soft-shell crab is excellent, crunchy, with lots of vegetables and a sharp sweetness to it.

If Ladda’s was a bit closer to home I think I would get all our Thai takeaways from there – Thai La-Ong is our current takeaway of choice. 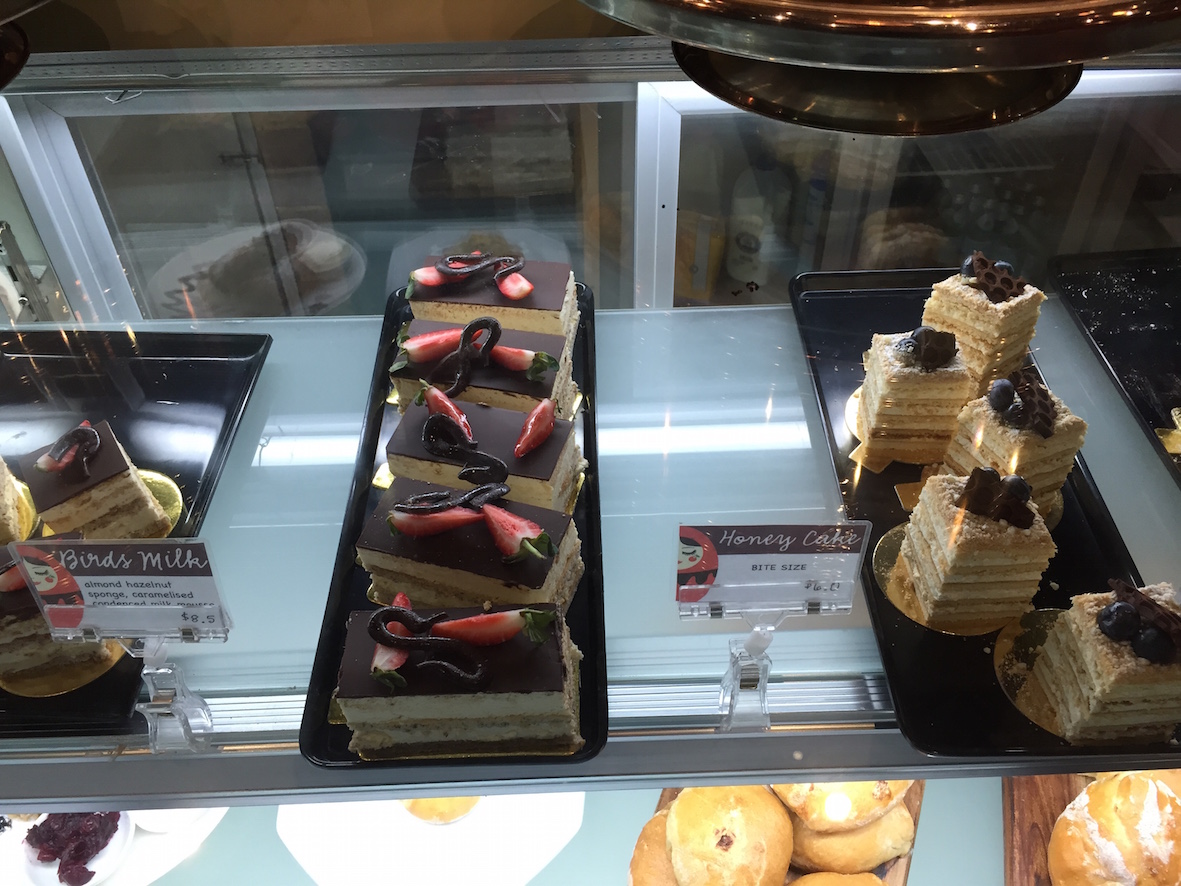 Despite having over ordered, we managed to save enough room for a nice bit of Russian cake at Izba. At last. I opt for their “most famous” honey cake and a cup of Russian Caravan tea (well obvs) but Strop has a bit of trouble with the whole ordering thing. Every cake she selects from the menu is out of stock. She finally settles on the Birds Milk cake, and a decaf coffee.

Luckily, the light, layered, creamy cakes come in bite size as well as brick size so we have no trouble squeezing them in. I really liked the honey cake but I think Strop’s Birds Milk was the winner, despite it’s bizarre name. Suitably fortified, we step outside and struggled home along King Street, through the blizzard of Saturday night incomers. 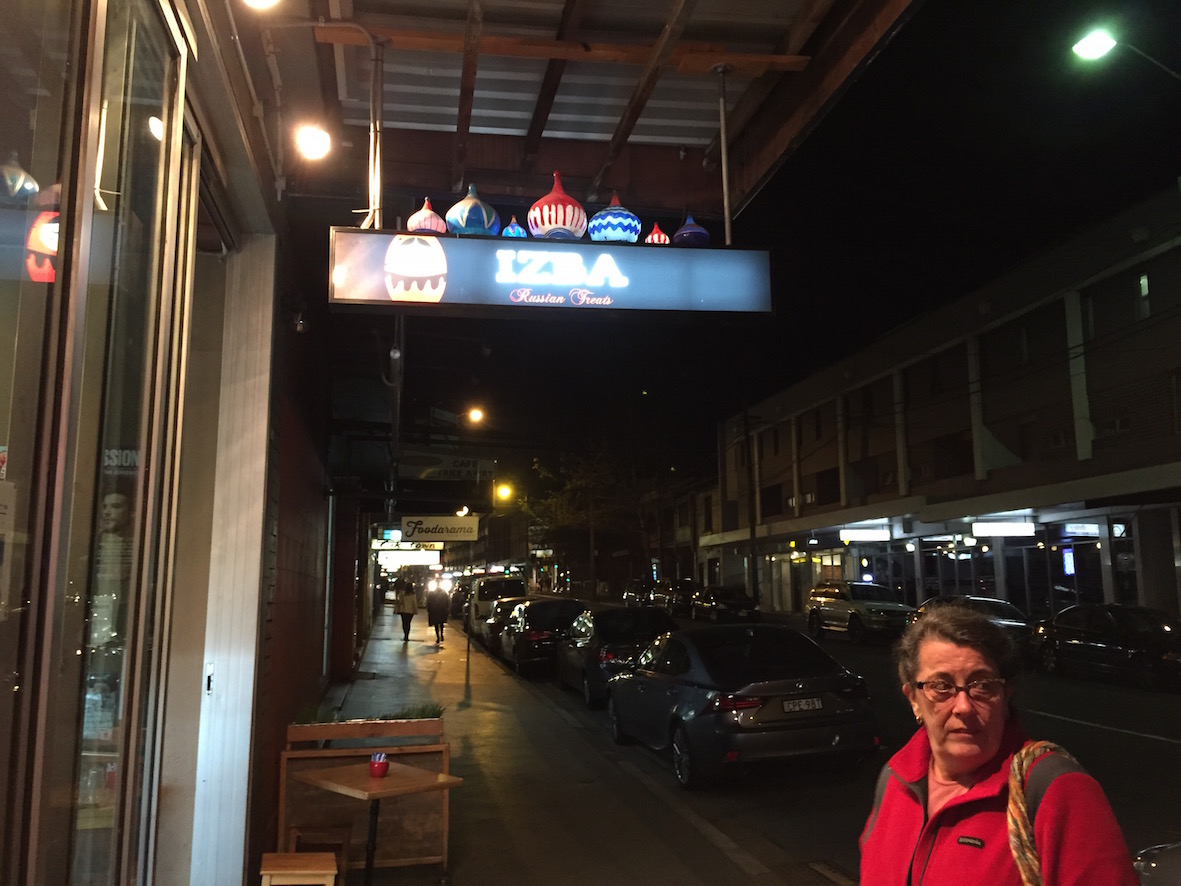