We have just entered a small Turkish enclave on the way to St Peters. Ferah Turkish Café, being our first encounter in this sub-quest, has the opportunity to set the standard by which the rest will be judged. And it does.

We have been looking for a new place to gather for drinks before we descend on the quest target for the day. For a while we were going to the Newtown Social Club as it is pub-esque and close to this slippery-slope part of the quest, but we find it a bit loud and a bit dark on these nice warm summer evenings. So tonight we are meeting at 2042, which is light and airy, being open to the street, and while it doesn’t have a hipster-compatible range of artisanal beers, it has enough for lubrication purposes.

Strop, the Stropolina, and I arrive a bit early and indulge in some family catch up time. Strop recounts her traumatic afternoon, trying to rescue a dog that had been hit by a car and was staggering around on the Hume Highway in peak hour traffic. And no one was stopping. Seriously, what is wrong with people? How fucking important is getting home on time? Or to the pub? Or wherever? Anyway Strop ventured out into the traffic, daring them to run her over too, and managed to get the dog to the side of the road – but he didn’t make it. He had probably taken off in a panic during the thunderstorms that were brewing that afternoon. Anyway, Strop is due a humanity award. Another one.

Mark is running a bit late as he is being bent back into shape after a discomfiting bout of jet lag. “From a four hour time difference?” Strop and I mutter and nod knowingly to each other, “Get over it, mate. Try eleven hours, that’s jet lag.” Mark tries to explain that they reckon that short time-zone changes from west to east are the worst, but we’re not having any of that malarkey.

Before things turn ugly, we up-stumps and head for Ferah Turkish Café. This is the second time we’ve been to Ferah recently. The first time was with John and Pauline, for a post north African holiday de-brief and scarf comparison session. I didn’t write about that visit as I didn’t consider myself on duty as a bloggerist at the time. But this time I am definitely on duty, and I have the notebook out, recording the menu choices even as they are being made. Unfortunately, after Mark has gone through the order with the waiter I, having written it all down carefully in illegible scrawl in my notebook, feel the urge to repeat the order. Just to clarify. The poor waiter is Turkish after all, and Mark isn’t. Unfortunately my intervention leads to us ordering twice as much as we thought we were. My only excuse is that I was just trying to help – it was not at all a ploy to get out of ever having to do the ordering, ever again. Soon after this debacle had been sorted out, Mark started talking in Turkish to the waiters. Show off.

We all ordered ayran (salted yoghurt drink, and no, I’d never heard of it before either) to drink which surprised our waiter even more than when I had completely doubled the order. 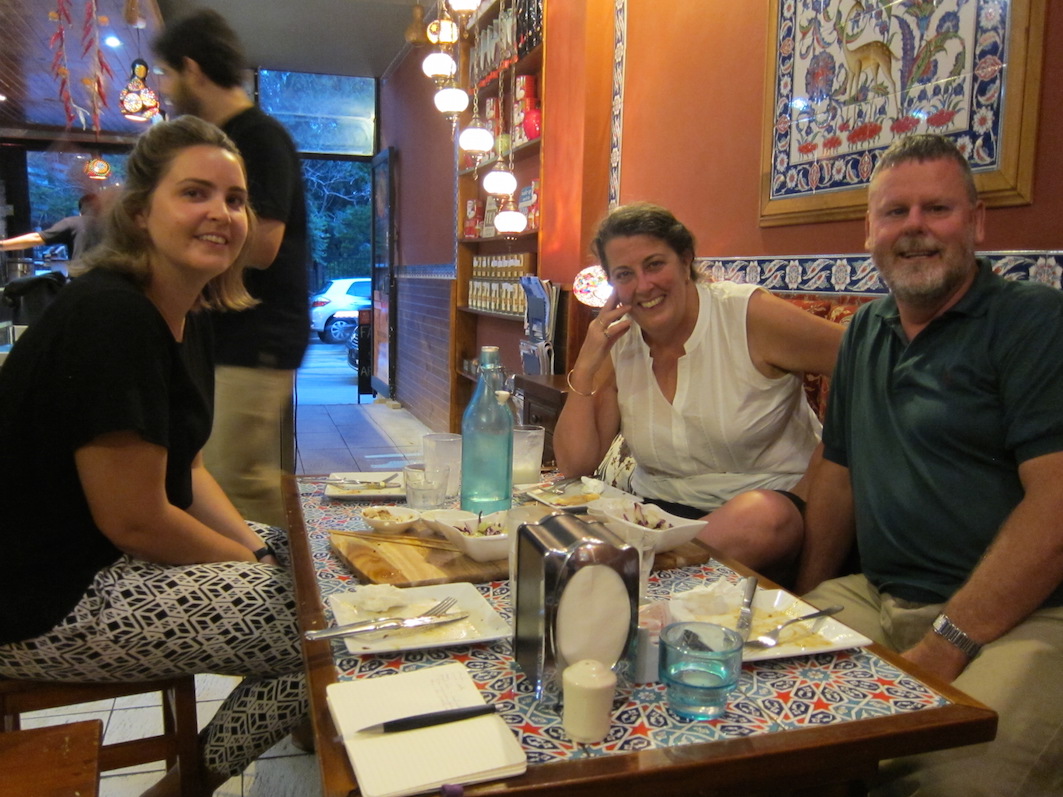 The food started arriving quickly: hummus, baba ganoush (really nice baba), cacik, vine leaves and felafel. We are all soon dipping away with our bits of bread, and trying to talk with our mouths full. The only slight disappointment was the felafel, which seemed a bit pale and a bit dry. The rest, especially the baba ganoush, was excellent.

Ferah has an accompanying Turkish artefact shop next door with lots of rugs, tiles and lamps for you to buy. If only the food didn’t keep coming so fast, you might have time to go and check it out. A lot of the tiles and glass lamps have made their way into the café along with a water feature, which has taken up residence in the corner.

Our mains are mixed grills to share – an Aussie classic re-interpreted by the Turks. Or maybe it was the other way around. Whatever. They come with skewered bits of chicken, beef and a meat patty that might have been lamb, as well as delicious rice, a salad with red cabbage, and more bread, carefully located beneath the meats to soak up all the juicy goodness.

There was very little talking for while as we demolished this lot. The general consensus was that the beef and the rice were the winners with an honourable mention to the patties which were nice and spicy. It was all good though.

Ferah has set the bar high at the start of our trek into King Street’s Turkish territory. And it’s cheap too.