Cafe Newtown, you’ve all seen it, sitting out there in the middle of the enormous intersection that is the throbbing but hollow heart of Newtown.  Cafe Newtown is the nominatively-determined, defining point of Newtown cafe society, the Google Maps pin, pointing at the very definition of saturday morning bacon and eggs, the still eye of the Newtown traffic hurricane, the hipster crossroads… Worryingly, I feel as if I could keep coming up with this shit all day.

We decided to go at night. I know, I know. You’re going to say, “What about the rules? You can’t… blah blah, keep changing them blah… just make it up as you go along…” Totally agree. We do, totally. But they’re our rules, and we’ll do what we want with them. And anyway it’s Friday night and I desperately need a drink and something to eat. There was special Turkish food at the work’s friday night drinks, but it was all eaten by the students while I was busy trying to transfer lots of lines on lots of bits of electronic paper, from one computer to another computer, to keep a third computer happy. As I say, by the time I emerged from Newtown station in the middle of a horde of invading shiny young friday night stormtroopers, I needed a drink.

Strop had nabbed a splendid table, outside but up against the building, so we didn’t need to worry about coming into direct contact with any of the pedestrians squeezed between the traffic and the cafe. The surprising thing about sitting outside at Cafe Newtown on a friday night, is that the traffic doesn’t impinge on the experience. There is enough noise from the chattering punters and the pedestrians, and the little bit of overhead canned music, to keep the traffic noise at bay. Except for the occasional dick-head who has been getting off by fiddling with his own exhaust pipe. 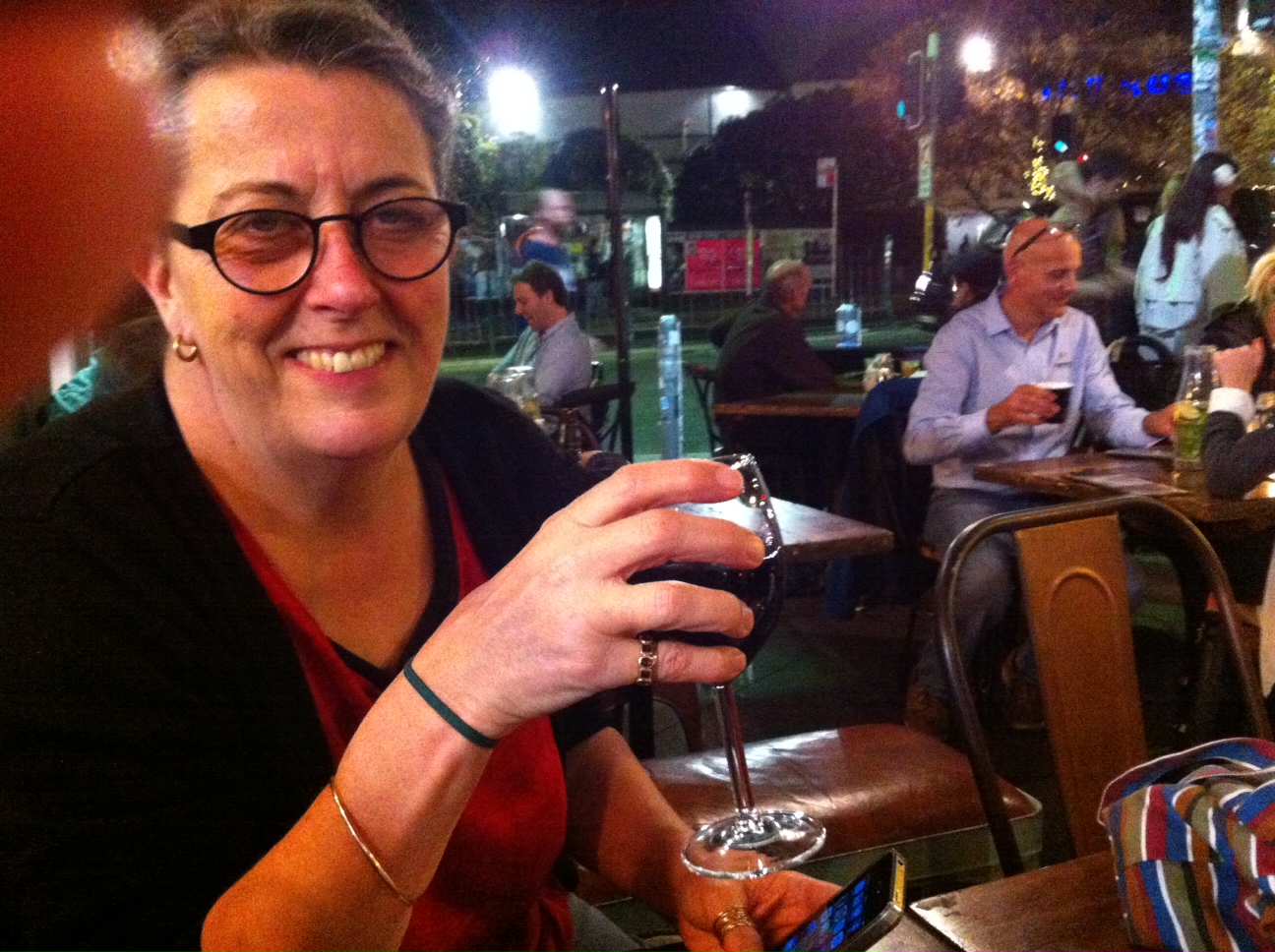 We quickly order drinks and dips from the waitress (who has such a strong Spanish accent that I never actually work out exactly which beer I am drinking – luckily by that stage it didn’t really matter) and settle back to watch the Newtown floorshow. This place has an unsurpassed view of the passing tattoo-and-hair-do parade. There were a lot of them. Standouts included a pair of middle-aged women dressed as geishas and the bloke wearing as many fluro tones as possible, with matching headphones. The old bloke with the mobility scooter that he has converted into a mobile PA system (complete with Elvis statuette) kept going past, doing laps of Newtown, and occasionally having to lean forward and tap people on the arm to get them to make way for his one-man mission to bring the King to King Street’s crowded pavements. I commented that I hadn’t seen the Elvis-mobile for a while and Strop wondered whether his appearance tonight might coincide with the full moon. Now there is study worth funding.

The dips came in three pots, and with three types of bread, lightly toasted and drizzled (lovely word) with olive oil. Yummmm. We were most of the way through hoovering this lot up when I glanced up, with a crispy wedge of pita bread jammed in my gob, and noticed an attractive young woman leaving her table and giving me a big smile. I was surprised, because, despite my devastating good looks, this kind of thing doesn’t happen very… well, ever really. As I chewed my pita bread and checked my memory circuits, the smiley blonde moved inside towards the cash register, and I realised that I did know her. “Is that Peta?” I asked Strop – and she answered in the affirmative, for indeed it was. Peta was an inseparable childhood friend of the Stropette when we lived in Canberra. I think the last time I saw Peta was a lot of years ago. While I dithered about whether to interrupt her evening out with her friends, Strop decided to take things into her own hands nearly tackling Peta as she was about to cross the road. Well not really, and just as well because Peta is pregnant. Congratulations! We gave her a thorough grilling, delighting in her news, and downloading lots of family goss, before releasing her back into the wilds of King Street.

Then we ordered more drinks, and after a somewhat heated debate, decided on quesadillas rather than sliders, mainly because I fancied trying to pronounce quesadilla to the Spanish speaking waitress more than I fancied eating a little hamburger. It wasn’t my best decision. The most exciting parts of the quesadilla were the extremely hot, sauce laden beans, that kept escaping and falling down the sleeve of my shirt. Still, the whole point of Cafe Newtown is watching the world go by, and it is an excellent place to do that.

We finished the night by making a quick tour of the exciting batch of new eateries that we will be visiting soon. There are some interesting looking places coming up. I can’t wait to get stuck in. 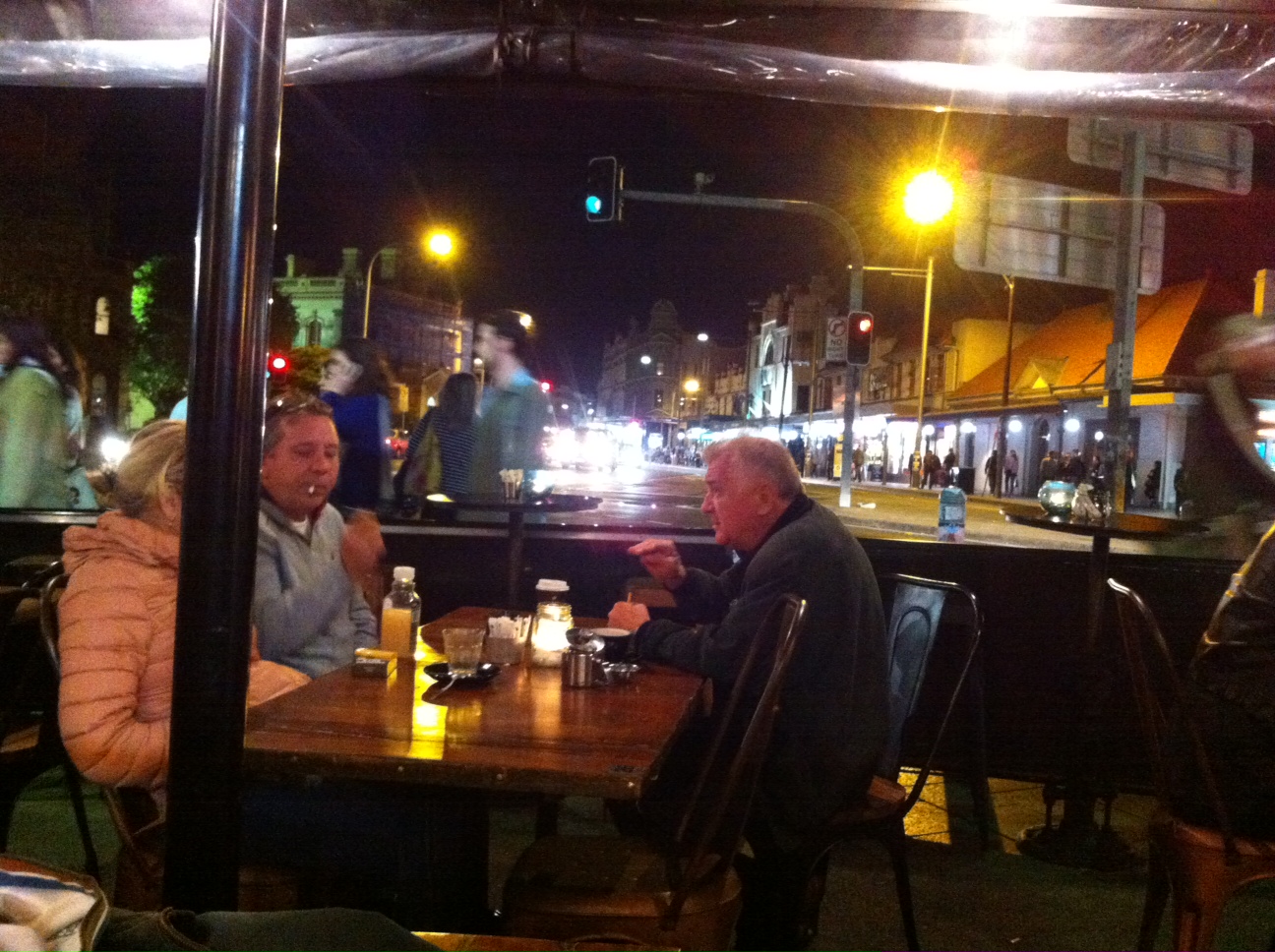