Strop wasn’t keen. This is a tendency she’s been showing quite a lot lately. A lack of keen-ness for anything that looks a bit hows-your-father. I’m going to have to have a full and frank discussion with her about the importance of our mission. She had tried to argue that we didn’t have to go to Zanzibar because they didn’t do food. But Mr Google proved her wrong. They have a quite respectable pub menu. So we have to go.

I can understand her reluctance. Someone has taken a perfectly acceptable pub and buggered it up with rendered walls and tropical imagery so there is no trace of pub-ness left. There is reported to be a very attractive rooftop terrace – but unfortunately the night we went it was closed due to precipitation. So we sat downstairs and provided free and confidential personality appraisals on all the other punters. Sort of anthropology with beer.

We sat at a rustic picnic table thing and looked longingly at the prime seats in the window which were already occupied. The thing that surprised me about Zanzibar, was that the place wasn’t crowded. When I got off the train from the city, I emerged onto King Street in a wave of young people looking for a party. All short skirts, tight pants and mascara. And yet Zanzibar is not exactly pumping. Maybe people were put off because the rooftop terrace was closed. Whatever the reason the most of the young revellers were not at Zanzibar. At least not yet. As the night wore on the number of muscly doormen seemed to increase, so they were obviously expecting someone to turn up for a bit of bouncing.

Another thing that surprised me was that I wasn’t necessarily the oldest person in the place. There was quite a bit of grey hair around early in the evening, although the proportion decreased as witching hour approached. Zanzibar does seem to be a bit of a meeting place early on. When I arrived there were a lot of men sitting on their own, playing with their phones, waiting for their dates to turn up. It took me a moment to realise that I fitted into this crowd perfectly, until Strop turned up.

The menu is not huge but it is quite interesting. As Zanzibar was at one time a pub I decide to try out their beef burger, ($12, on a brioche bun – I am curious about just what that implies). Strop is always a sucker for tapas so we decided to share a selection of tapas-ey things – fish cakes, fried cauliflower and Vietnamese style mince skewers. I was surprised that we seemed to be the only ones there to eat. Everyone else was either drinking and talking, or drinking and playing with their phone. 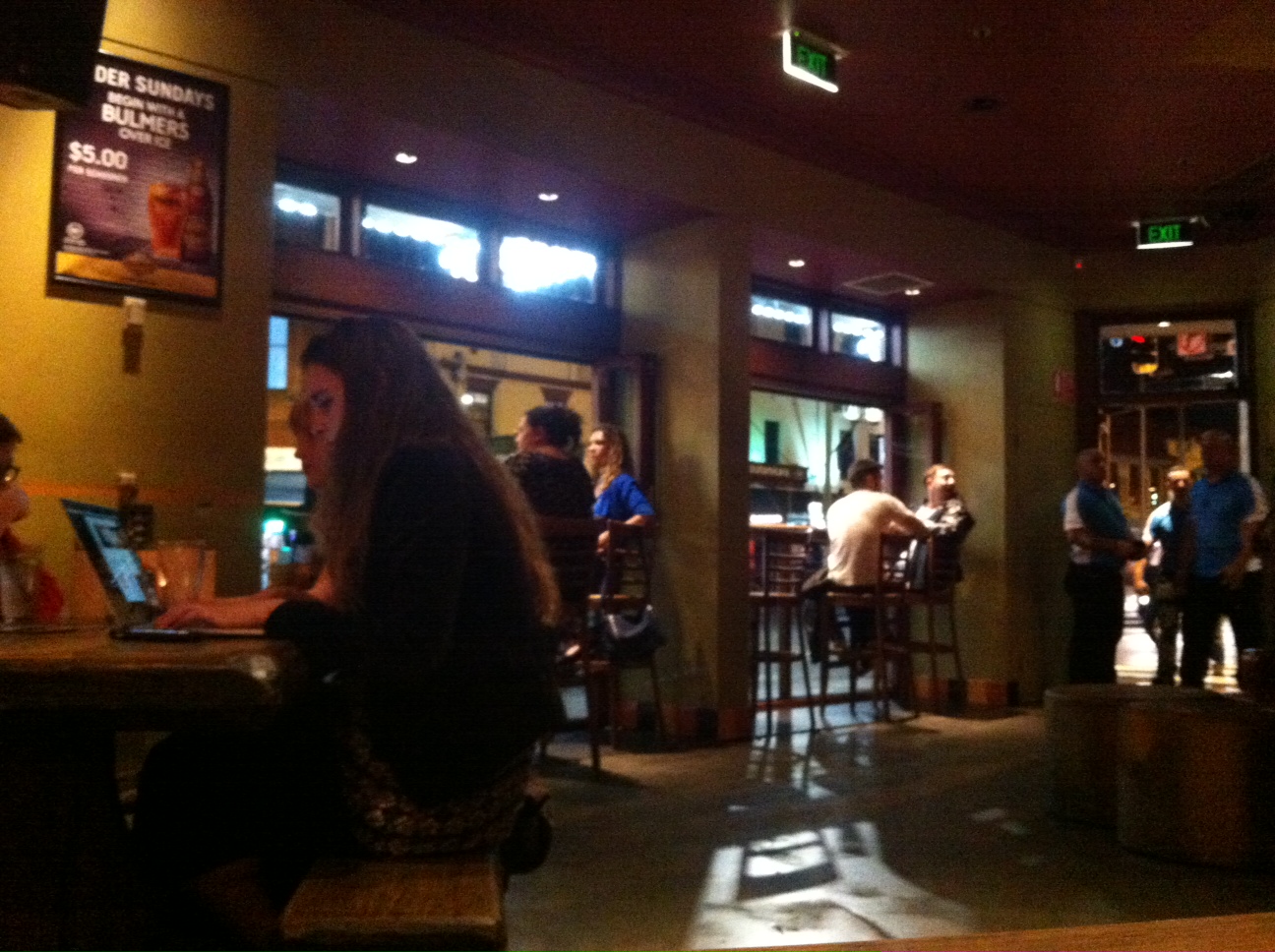 While we were waiting for our food I pointed out to Strop, that we seemed to be in a hipster-free zone. We could see hipsters outside walking up and down, but there were no beards, and very few tatts inside. Maybe Zanzibar is the last bastion of the non-hipster in Newtown. I mean, the decor does give off a weird and diffuse 1970s vibe, but with a complete lack of irony. Perhaps that’s the point, it’s the sort of place you wouldn’t be surprised to see The Captain and Tennille performing at.

Our musings on the fate of the non-hipster were interrupted by a young woman with an earpiece, long legs and a kiwi accent, who asked how long we’d been waiting for our food. She was concerned it was taking too long. She would have a word with the kitchen for us. I hadn’t noticed that the food was taking a particularly long time, but then we were busy being entertained by our own clever observations. And as we were the only ones eating, the kitchen probably wasn’t being run off its feet.

Whatever she said to the kitchen was effective though, and our food was soon presented to us. The young kiwi manager came back a few more times and asked us if everything was ok. Even when I was at the bar ordering more drinks, she leaned over the shoulder of the young bar-person and asked me if everything was to my liking. I was beginning to get a bit suspicious.

The burger was a pleasantly modest affair. It had some cheese, a bit of salad, some very nice relish, and the bun was soft and tasty. As the price suggested it was smaller than most of the over-stuffed burgers served in pubs nowadays. It was the size a burger should be, the size they used to be. It could be held in one hand and importantly it stayed together. Unfortunately it was a bit dry. Oh well, nothing’s perfect I suppose.

Strop described the fish-cakes as being comfort-food, but I thought they were a bit bland. The cauliflower was tasty and very deep-fried, and the Vietnamese mince stick things were tasty and yummy.

As the evening wore on the number of young people increased and the older people gradually thinned out. As we were leaving the manager came up to us once more to ask how everything had been. Fine, fine, we said to her, but we looked at each other and nodded. Yes, our cover had definitely been blown. She was onto us. We’d been identified as bloggers.

I’m not sure what gave us away. Maybe my notebook scribbling, maybe Strop trying to take flash photos of tables full of young women, or maybe it was the article in this month’s copy of the South Sydney Herald, complete with photo of yours truly. Whatever it was, our anonymity is gone. From now on we are going to have to wear disguises.