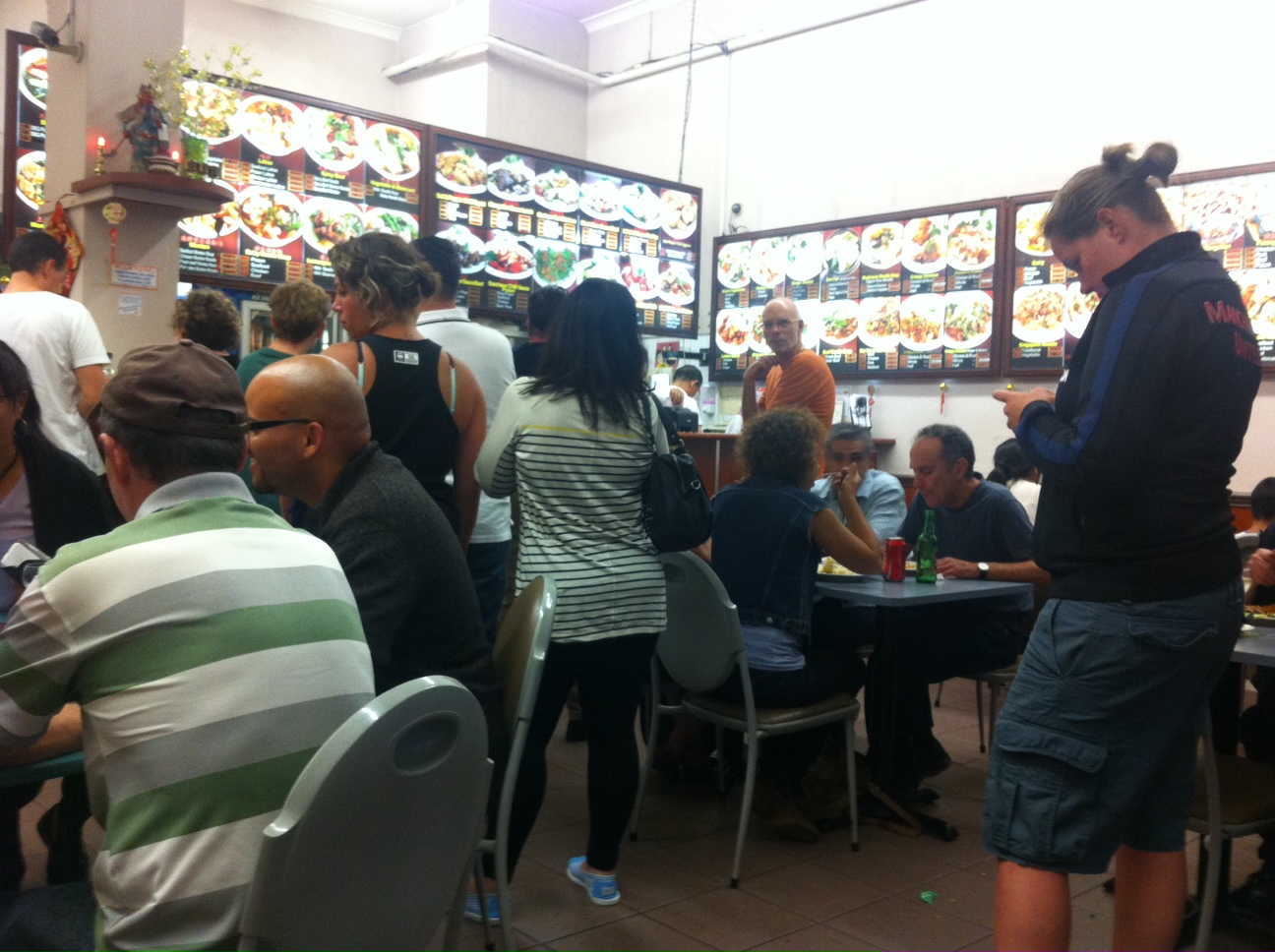 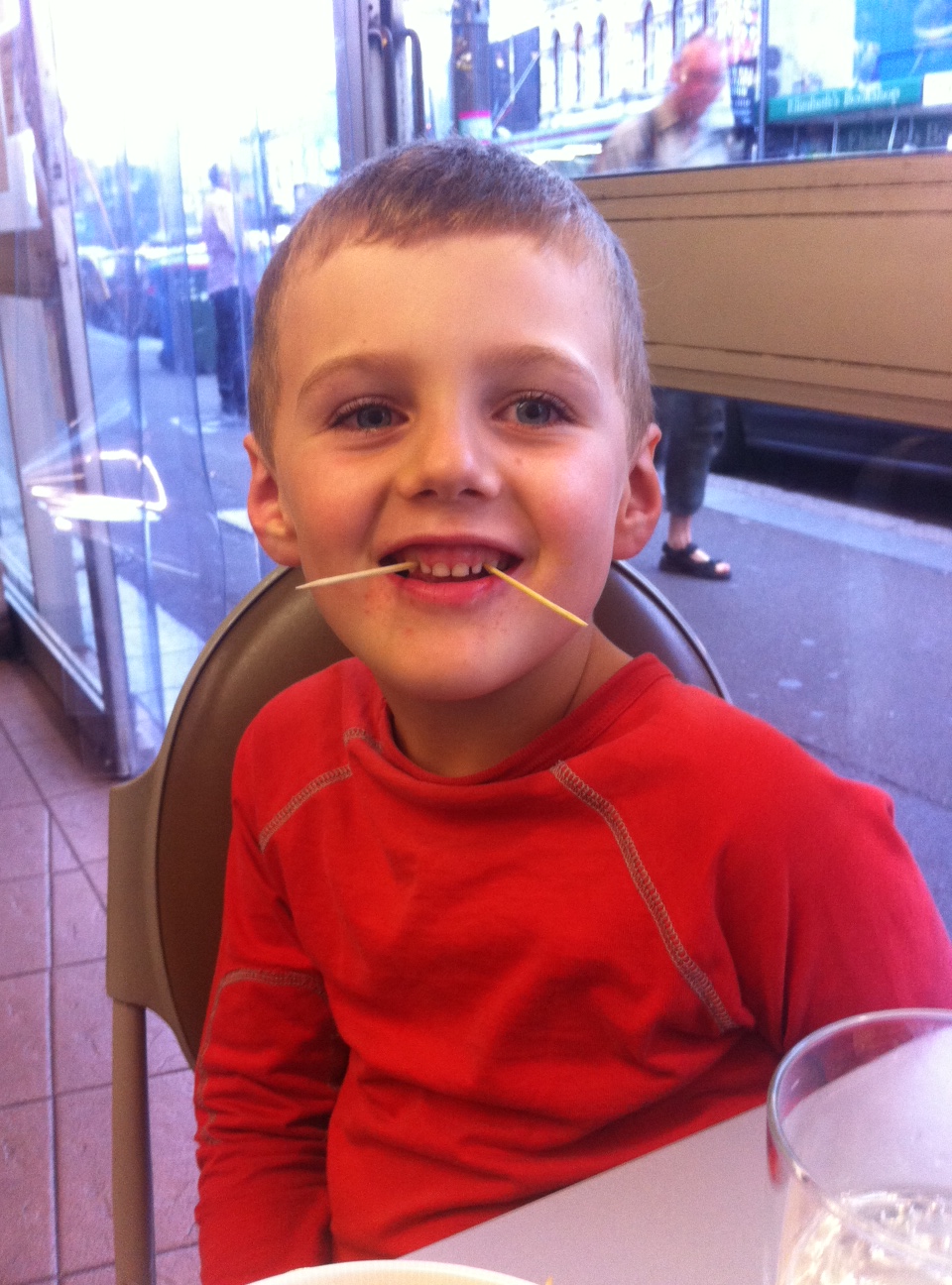 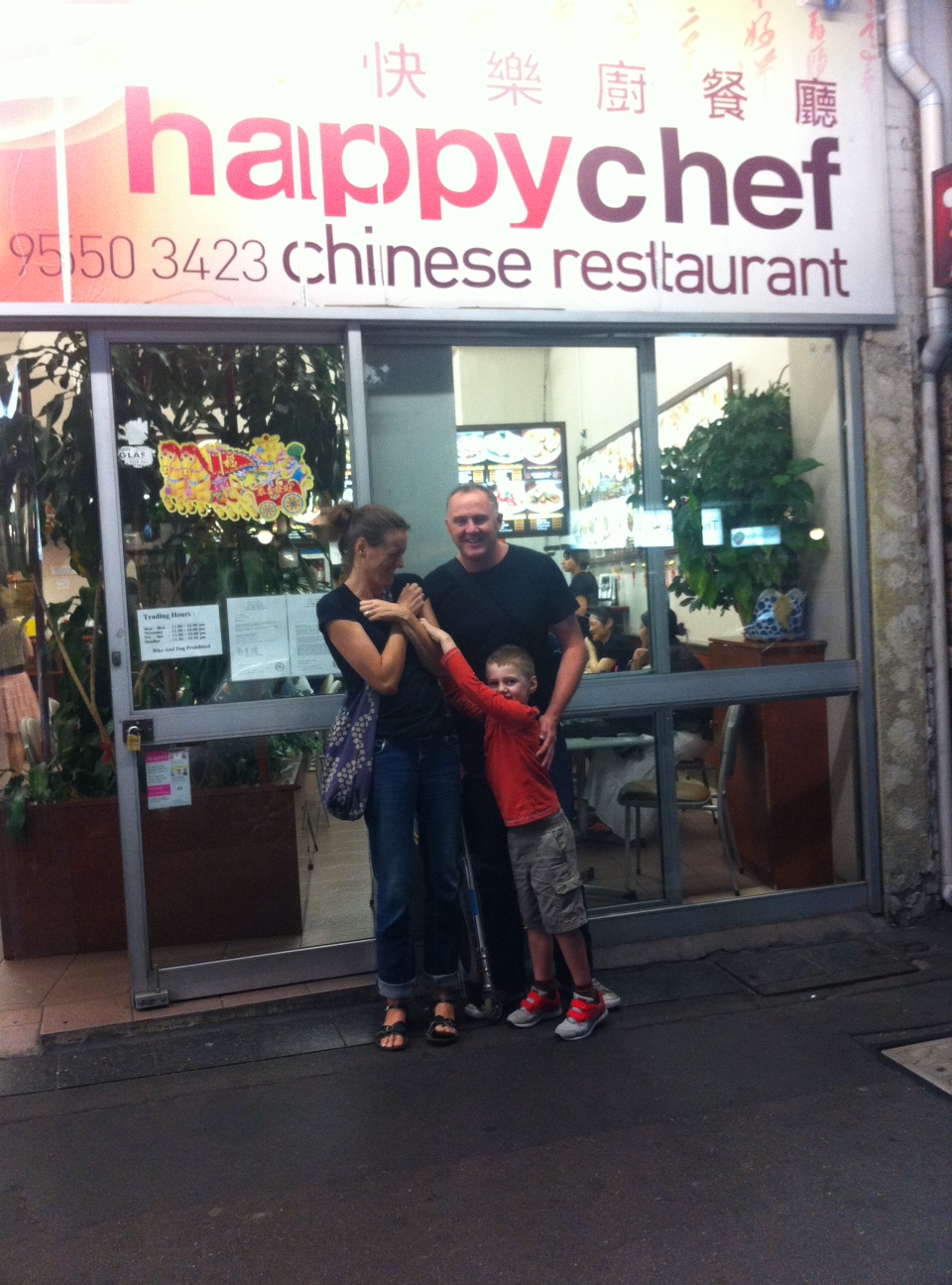 Milk Bar; is it a cafe or a restaurant? That is the the dilemma that faced us. I was on the cafe side of the equation, suggesting gently to Strop that it would be best reviewed as a breakfast or lunch venue, but Strop was having none of that tosh. She pointed out its close proximity to the Dendy Cinema (right next door with ‘outdoor’ tables actually in the foyer) and its reliance on the pre/post movie trade, as reasons that we should visit in the evening. As usual she was right, and that was what we did. However, I vetoed the optional movie add-on, on the basis that it would keep me up past my bedtime.

We waited out the 6pm pre-movie rush across the road at Black Sheep with a couple of beers. I was drinking the provocatively named My Wife’s Bitter and Strop was downing a very fruity something called Stone and Wood, “The chief beer buyer says it’s his favourite, from Byron Bay or somewhere like that”.

When things at the Dendy had died down a bit, with everyone safely choc-topped up and watching Mr DiCaprio wolfing along Wall Street, we crossed the road and settled ourselves down at Milk Bar. The room is a big open space, with a high ceiling that is open onto the street and also opens into the foyer of the cinema. It is simple and modern, having been renovated during the last remodelling of the Dendy building, and is quite an attractive space. The clientele seemed to be a mixture of tourists and locals. 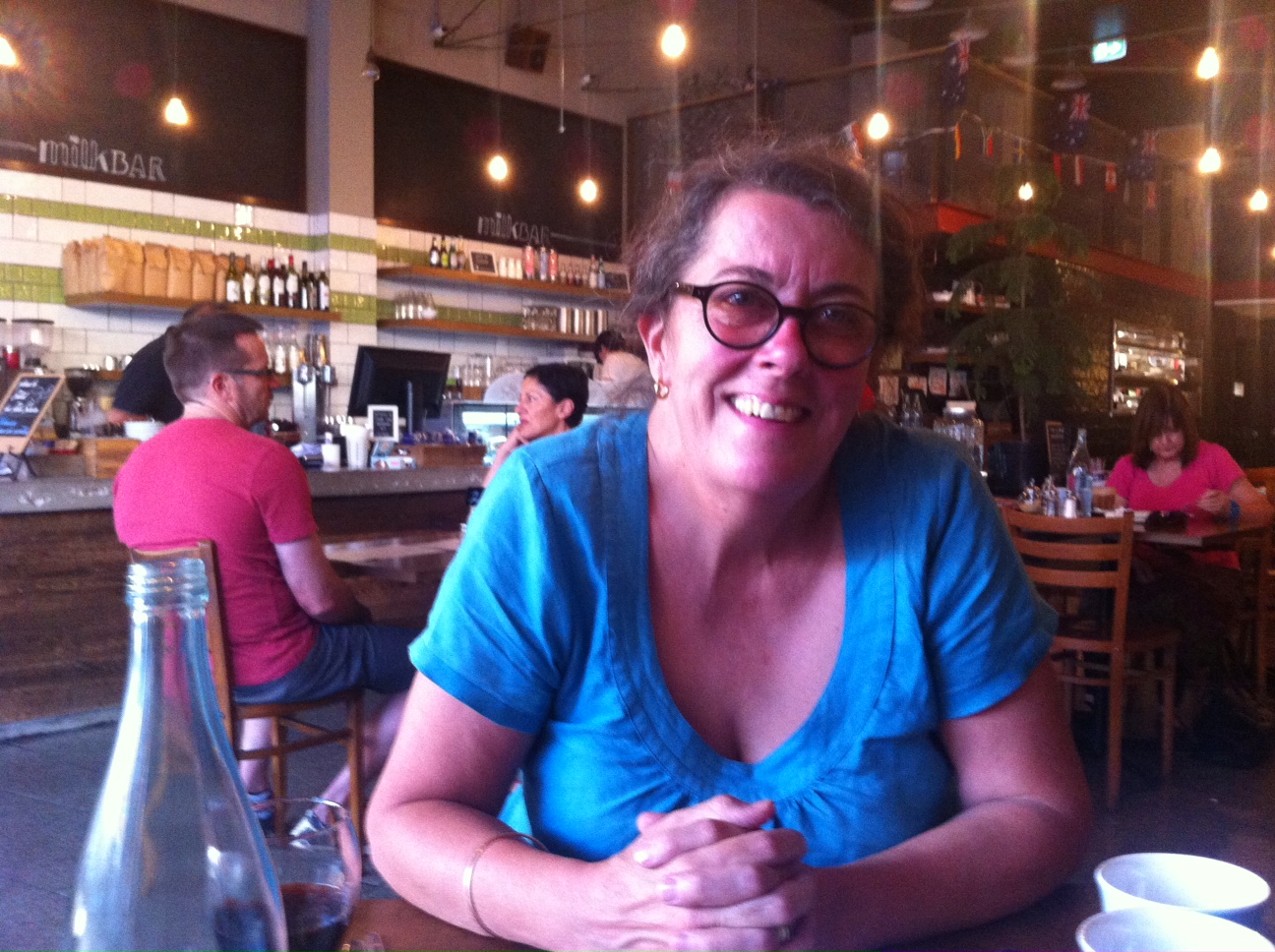 The menu features plenty of pasta and risotto as well as steaks and chicken. I was shocked to see Quinoa Fritters on the starters menu and was briefly tempted, simply on the basis of perversity, but then I noticed the alluringly-named Pork Belly Bites. Strop opted for Crispy Squid. Strop finds it hard to resist ribs on a menu, so that’s what she chose for mains and I passed over the fish and chips and went for the Crispy Chicken, mainly because of the promise of accompanying Italian slaw.

When the friendly young waiter came to take our order, Strop asked about the wine list, but was informed that they don’t have a list as such, just wine. Three whites, two reds, and a rosé to be exact. We felt the undertow pulling us towards the rosé but decided that it was too big a risk, given that the waiter had never tasted it. So we played it safe: Strop went for the Pinot to go with her ribs, and I ordered a Chardy to go with my chicken.

The starters soon arrived but were disappointing. The Pork Belly Bites turned out to be cubes of very tender pork, inexplicably hidden inside a bland coating of deep fried bread crumbs. Nice enough, but they would have been so much better without the coating. The squid wasn’t particularly crisp or tasty, and could have done with more seasoning or even some chilli. When the mains came, I realised that the waiter had misheard my order and put me down for the chicken breast instead of the crispy chicken. Strop is always telling me I mumble so I guess it is my own fault. The chicken was nice enough, if a bit on the dry side, but the jus was good, and the potato dish was great. A kind of potato gratin, with the potato sliced very thin, and compacted into a dense slab. My description doesn’t do it justice, but it was excellent. Strop’s ribs were very tender but they were coated with a strong sweet marinade that overpowered the meat.

For dessert we opted for a shared combination of drink and dessert. I asked to see a dessert menu but was informed that they don’t have one because the desserts change all the time. So Strop and I took turns to go and check out the options in the display cabinet. There were lots of lavish looking chocolate and cheesecake variations. Strop was attracted to a tart with raspberry and pear (right up her alley that one) while I couldn’t get past the slicey thing called a Monkey Something (sucker for stupid names, me). When I convinced Strop that the Monkey StupidNameThing looked a bit like an Eccles Cake, she went into a nostalgic revery, and started talking like the Goons character who shares the same name. During this slightly disturbing display the waitress arrived and we ordered the Monkey Thing and a Coconut Milkshake as well. The milkshake was great and I really liked the cake, but Strop couldn’t get past the fact that it didn’t live up to her rose-tinted memories of moist and spicy childhood cakes. So I suspect that she won’t leave me in charge of dessert ordering in the future.

Milk Bar is probably more of a cafe than a restaurant, but it has friendly staff and is a pleasant place to wait for a movie or watch the King Street parade (one unidentified Famous Person, a poet and a photographic club tonight), as long as you modify your expectations appropriately. The serving sizes are generous, by the time we left we were so full we could hardly waddle home.

Next up is Happy Chef, which I always want to call Happy Geoff for some reason. Let us know if you’d like to join us. 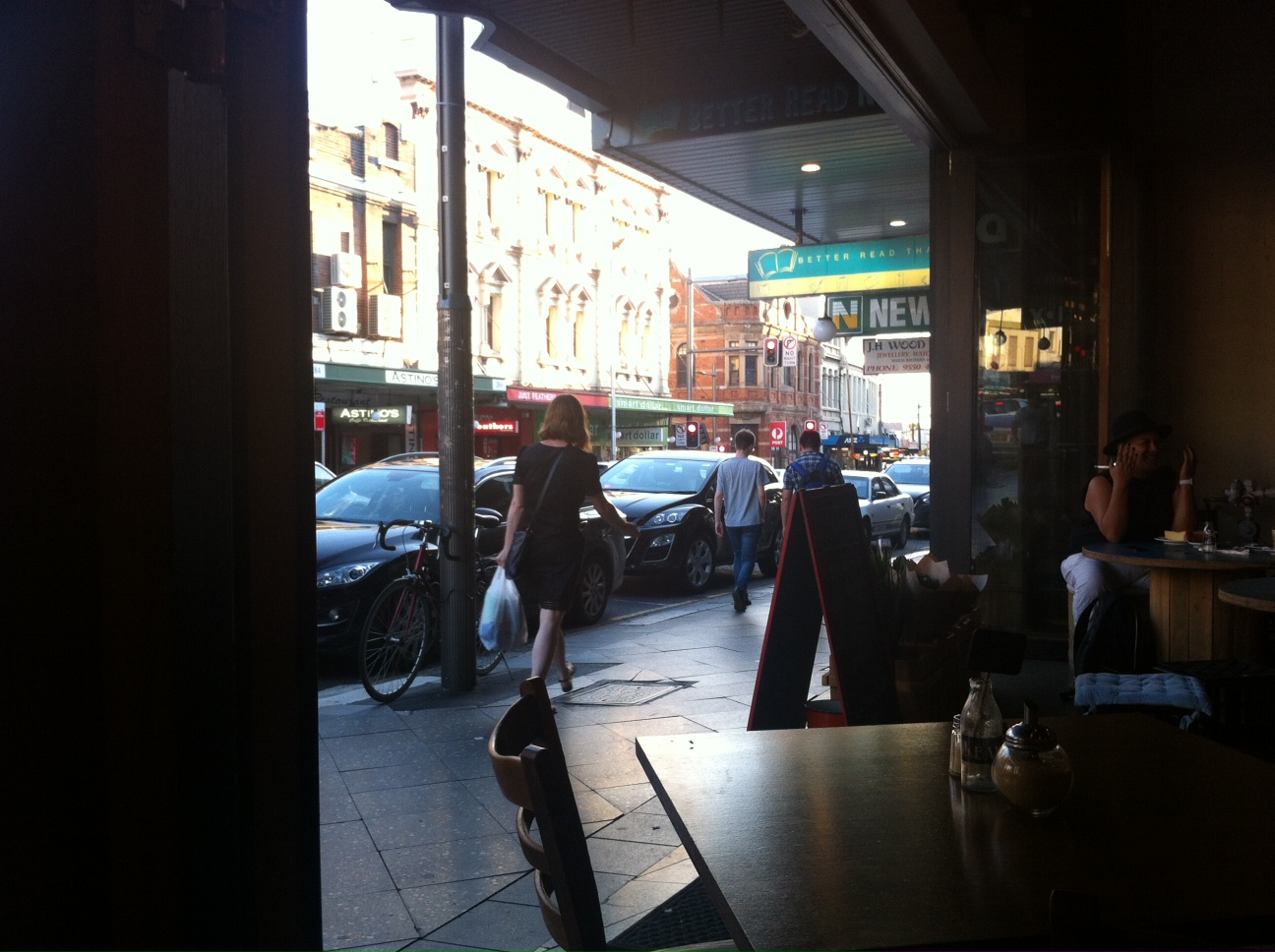