This is where we were supposed to go last week when we were fooled by the discrepancy between geographical and numerical order. Anyway, we are here now, a bit earlier than usual because we are off to the theatre (“Darling”) afterwards, for our last festival outing. After taking last year off, we approached the festival this year in our usual ill-informed manner with perhaps an added pinch of  cultural risk-taking. It hasn’t paid off. Especially for Strop. Her post show comments have included “Dire!” “Wankers!” and the ever-reliable classic, “That’s ninety minutes we’re never getting back.” She especially didn’t like the afro-futurist jazz played by an eighty year old saxophonist. The only thing she has loved so far was our first outing to a magic show, which was very good. Entertaining, even.

(Optional magic show Rant: There is something strange about going to a magic show. You enter into a consensual contract with the magician to be lied to. You know that there’s nothing magic going on, that it’s all about deception and illusion, but if the trick is wrapped up in an entertaining package you go along for the ride, trying not to give too much thought to how they’re doing it, because the answer is always going to be completely mundane, and in the end you want the showmanship more than you want the truth. Much like religion really. End of Rant.)

Italian Bowl is all about pasta. And speed (no, not that kind). The food is fast, fresh and relatively cheap. It caters to a lot of pre-movie punters and it does a fair trade in take-aways as well, but it is not the sort of place to linger over your linguine. Its business model is based on fast fettucine and the occasional rapid risotto (okay, too much of a mediocre thing, I agree – and you probably can’t cook risotto quickly anyway).

It is not a large place and more than half of the floor area is given over to the kitchen which runs along one side, leaving punters squeezed against the other wall. Or out on the street. We arrived at 6pm, right in the middle of the pre-movie rush and the only table was right out the back. Tonight we are joined by the Stropolina, and it is a bit like being back in Vietnam again as we sideways-shuffle our party of wide-bodied Australians through the packed-out tables, and squeeze into our seats trying hard not to bump the other patrons who are busily slurping up their spaghetti. It was only after I had settled myself down that I realised I was going to have to get up again and go and order at the counter at the front. The big Italian guy taking orders at the front is something of a maestro of efficiency, plucking order out of the noisy chaos around him. By the time I’m half way to the front he has a number on a stick ready and is waiting to take my order. By the time I have got back to the table the garlic bread is hot on my heels.

Italian bowl is not somewhere for a slow romantic meal. It is noisy (you are basically eating in the kitchen), full of the clatter of pans, and a bizarre music soundtrack that Stropolina reckons must have been programmed by someone’s mum. It is however fun, and it is fast. The food may not be brilliant but it is tasty and freshly prepared in front of you. And I do love an Italian place that has parmesan shakers on all the tables.

Afterwards Strop and I strolled back along King Street towards the Seymour Centre, enjoying the light rain, and doing a bit of restaurant reminiscing (I can’t understand why that place is always full etc.) and noting the closures and openings (what’s happened to Asian King?). The show, Ockham’s Razor, turned out to be great, aerial theatre/dance in three short acts. Beautiful, engaging and entertaining, – not a lot to ask for really, and a good way to end our festival.

Next up, according to Strop’s calculations, is Milk Bar which I think is a cafe so it might be another breakfast outing. 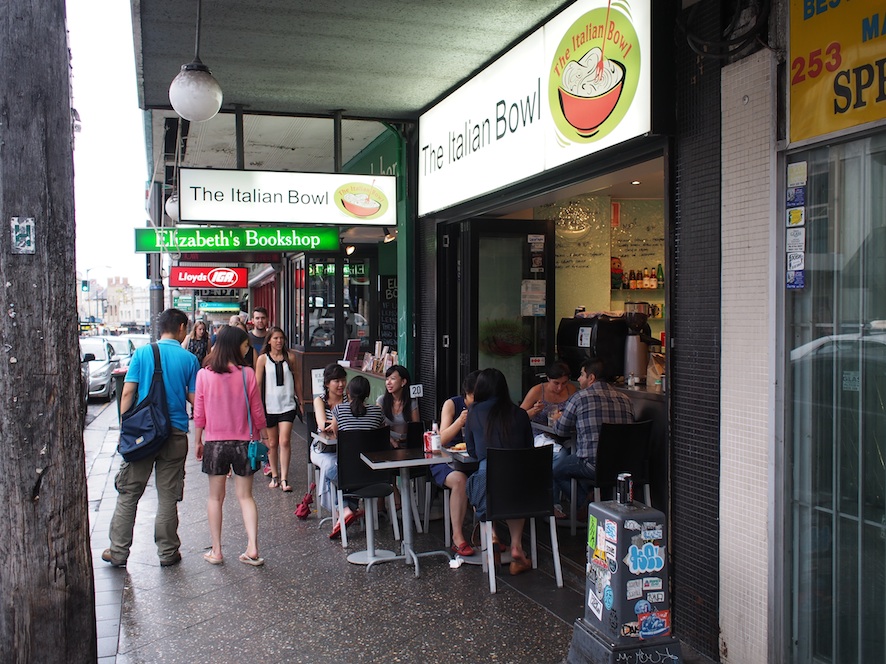