Happy New Year? Well, not bad so far but give it time.

On Friday night Strop and I hit King Street again, reinvigorated by our sojourn up the coast and by three weeks forced proximity with young people. Unfortunately we still had our holiday heads on and failed to do even the most basic research before downing a welcome-back Dogbolter and waddling towards Black Sheep. In our enthusiasm to get started again we assumed that Black Sheep was  the next place we should be visiting (a quick check of our own blog would have told us that it is not) and nor is Black Sheep even really a qualifying eatery. It is more of a drinkery. A bar that flogs a few tasty tapas-style stomach-liners. By the time we had established all of this, the enticing idea of a nice cocktail had lodged itself in our holiday heads, and a charming tall hipster barman had seated us and taken our order.

Oh well, go with the flow. Live in the moment. Listen to the rather nice music.

While we waited Strop started sorting the postcards she forgot to send when we were on holidays, into geographically based themes, and I tried to remember how to switch off the thing in my new camera that makes it take fifteen of photos of my lap whenever I press the shutter.

The cocktails arrived quickly – an orangey-red rum and amaretto one called the Black Sheep (presumably just because they needed a signature cocktail) for Strop (she liked it a lot) and a very lemony one for me in one of those stupid pretend jam jars. The lemony one was called Atomic Tom and came with a warning. “That one is very sour, let me know if you want me to put some girly sugar in it for you,” said the barman, as he placed it in front of me. Okay, on reflection he may not have actually said girly, but that was what I heard. Any way it was definitely a challenge so there was no way that I was going to admit that his lemony drink was too strong for me, and ask for some girly sugar. Hell no. Luckily after the initial mouth-puckering, it turned out to be very infreshing.

“Food’s taking a while,” Strop said, looking up from her postcards. She was up to the Big Banana at Coffs Harbour by this stage. As is usually the case, as soon as you ask how long your food will be, it suddenly arrives, making you wonder if they have just been hanging on to it to see how long it will take to get a rise out of you. Or maybe it only seems that way if you’re a bit paranoid.

Another, shorter, hairier hipster brought out the food. Grilled chorizo first. “Do you want cutlery for that?” he muttered as he started to disappear. We looked at the sizzling slices of sausage, the big dollop of aioli, and the finely sliced cabbage salad, then we looked at him. Was this a test? Some of the much vaunted hipster irony? Or was he just taking the piss? Or was he a moron? Yes, of course we want fucking cutlery.

Knives, forks, plates and napkins duly arrived, followed soon after by our croquettes. The food was very good, especially the chorizo and the salad, and disappeared very quickly. Which was just as well, because we still had to find somewhere that served actual meals to review.

So apart from the hipster unfamiliar with the function of cutlery, Black Sheep was a pretty good place for a drink and a nibble. But I might just have a beer next time. 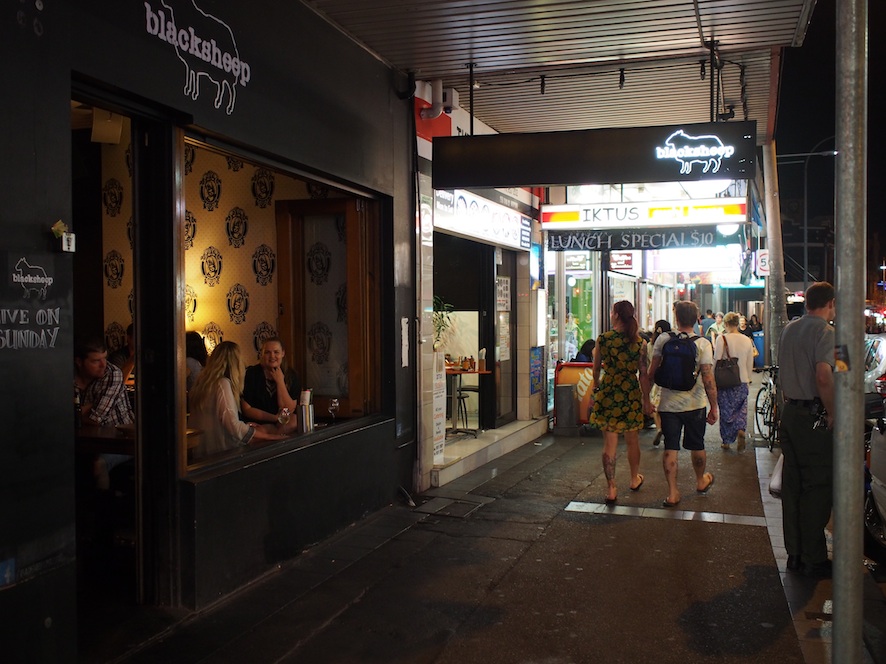