What to say about M.O.A.N.? Well for a start – what the hell were they thinking? Moan? Really?

This place used be called Cicciolina (the name is still on the awning), seemingly named after the Italian porn star/politician. It famously used to have a sculpture of a giant clitoris on the wall, which was presumably a very particular part of the theme. The sculpture disappeared after a while – presumably looking a giant clit in the eye was putting the punters off their Spaghetti alla puttanesca. I tried to find an image of it for you on the webz, but when I entered cicciolina + clitoris into Google Image Search the results were so distracting that I had to have a little lie down.

So, MOAN. Well why the hell not? It is Newtown after all.

Strop assures me that M.O.A.N. stands for Menus Of All Nations or possibly Mix Of All Nations. Either way it is a completely stupid idea, and demonstrably untrue. The place is pretty much Italian, with a big dollop of oz-pub burger cuisine on the side. All the infrastructure (except for the sculpture) from Cicciolina days seem to have survived including the wood-fired pizza oven, and this drives the menu. The beer list does have a touch of the international about it. You’ve got Australian, Belgian, German, Japanese, Australian, Mexican, and another Australian. So, all nations.

Strop and I have fortified ourselves with a regulation Dogbolter before entering the fray, so we are full of confidence as we swan in and choose a table at the front so we can look out the window at the passing parade rather than having to talk to each other. The M.O.A.N. is not crowded, but there is a large and very excitable birthday group up the back next to the kitchen and the toilet. I imagine that they are warmer than we are, being closer to the pizza oven. Its a cold evening and I only have a nylon raincoat over my tee shirt but Strop says I can’t zip it up because I will look too much like a trainspotter. 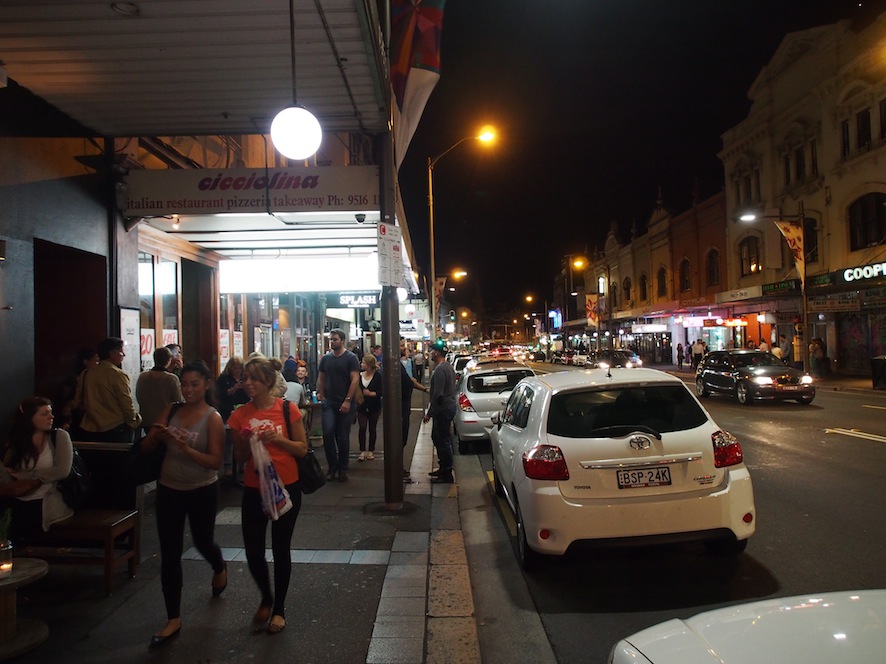 I order a Belgian beer and Strop orders a Merlot Of All Nations to go with our entrees of pulled-pork pancakes, and char-grilled vegetable salad. For mains we choose a pizza with sausage and mushroom. Strop pushes the idea of the Thai beef salad for a while on the grounds of All-Nationism, but I veto it on the grounds of stupidity. You don’t go to an Italian joint for Thai food – especially in Newtown.

The pancakes turn out to be small and skinny. They are almost lost on their big fluffy bed of salad leaves. But at least the pork filling is tasty. Tangy, sweet and salty. Really quite salty. The char-grilled veges are similarly lost in a sea of salad leaves as though someone has emptied a bag of mixed leaves from the supermarket, and put too much balsamic on it. The zucchini and eggplant are nice enough but the sweet potato is a bit undercooked. Oh well.

The pizza takes a while. In the meantime we argue about the political correctness of early birthday present giving in the context of grandchildren whose birthdays are only 3 days south of Xmas. We also discuss this year’s Christmas Tree strategy, next years holiday strategy, and try to figure out a retirement strategy that doesn’t involve pet food. All this strategising leaves us with empty glasses. Another round is called for. Unfortunately the glass of wine Strop gets is different from the one she had been drinking, but she doesn’t realise this until she has poured the dregs from the first into the new glass. All class.

Meanwhile in the kitchen they have been putting the wood-fired oven too good use. The pizza crust is excellent, but it is let down by the disks of Colesworths Best English Beef Sausage that are sprinkled generously on top. I mean, I was expecting Italian sausage. Is that an unreasonable expectation? 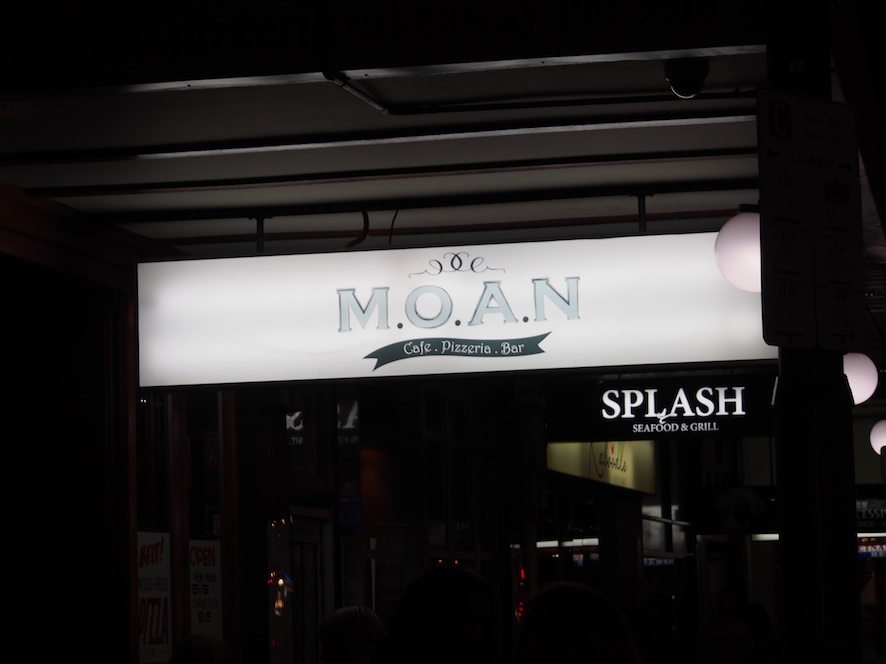