It’s a memorable name, but is it trying too hard to be cute? I was a bit dubious at first, but now I’m a convert. This place is full of cheerfulness and amusing eating. Just what we needed after a week of bad-news on the parental front.

“Let’s order first then talk,” said Strop un-bagging a bottle of WA riesling. I had spent the day filling in forms, and talking to aged-care and medical types, so alcohol and the promise of food was definitely called for before I started the latest Dad download.

We ordered a mixed bag of gyoza from the specials menu, to start, and teppan salmon, ramen with chicken and some edamame. The wait staff are all got-up in brightly coloured Japanese costumes, and they add to the general air of cheerfulness by greeting each new arrival with cries of “Moshi moshi.” And it’s not just the floor staff, the kitchen staff get in on the act too, in a kind of call-and-reply routine, shouting out more greetings from the back of the restaurant in response to the front of house greetings. Our waitress is the only anglo on the staff and seems a little bit nervous and tentative as she takes our order. I presume she must be new, learning the ropes etc. Poor girl, all those strange new Japanese foods to learn… until she shatters my presumptions by bellowing our order out to the kitchen in gutteral and nasal Japanese. Strop reckons the only thing she was nervous about was whether or not to correct our awful attempts at Japanese pronunciation.

Our table is near the front so we have a good view of the passing parade on the footpath. I point out a large group of gorgeous young things in short skirts and tall heels tottering past, no doubt on their way to happy hour at Kuleto’s. “Write that down,” says Strop pointing at my closed notebook. So I do as I’m told.

The edamame arrives first and keeps the alcohol company as I update Strop. Then the rest of the food arrives very quickly, so we stop talking and get stuck straight into the task of serious eating. I think I’ve only ever had one type of gyoza before so the mixed gyoza plate is is a whole new experience. Mushroom gyoza? Prawn gyoza with the tail sticking out the top? Who knew? Cheese gyoza? With tomato sauce for dipping? It is all strange and fascinating and somehow very Japanese. It is also extremely yummy. The teppan salmon is fantastic too, tender and tasty. The ramen is disappointing though. It is made with instant noodles which have soaked up most of the stock, and the egg is hard-boiled. But the stock is tasty and the chicken balls are really good. So swings and roundabouts. Strop is reminded of a Japanese film about a ramen restaurant (from the days when we used to go to Japanese films).

“It had a cowboy hat wearing truck driver.”

“Yeah, I remember, and an old guy who was like a ramen whisperer.”

“And that sexy scene with the live prawn flapping around on the girls stomach.”

“Was that the same film?”

“But what was it called?”

Strop and I are feeling no pain by this stage and opt for the dessert menu. Yes, we are pleased to confirm that they do have dessert gyoza. And how could we not try them out? What kind of woosie correspondents would that make us? Exactly. So we order the apple and cinnamon and the banana and chocolate. And they are excellent. The banana turns out to be a small refined version of that venerable suburban Chinese restaurant standard, the banana fritter. And the apple is a kind of crispy reconstructed apple pie. More yums.

And so it was. I thought the name had something to do with flowers but she’s right. Memory is a funny old thing. Loved that prawn scene.

We cruise past a few bookshops on the stumble home, before self-medicating with chocolate and whisky in front of the telly. Simple Pleasures. 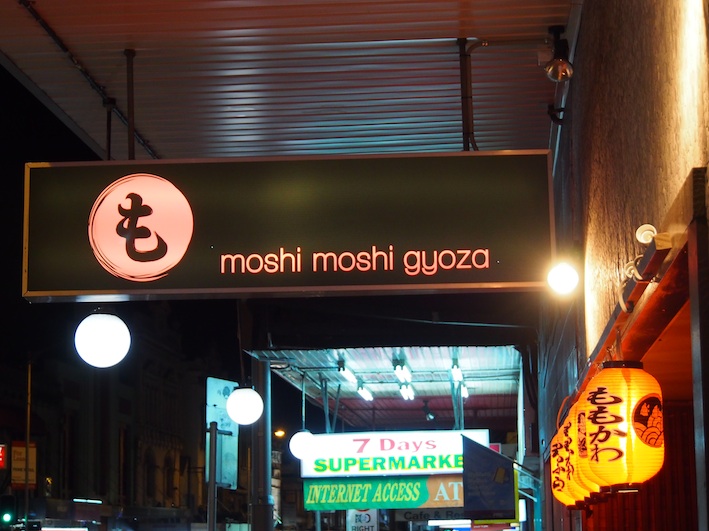