I don’t know if anyone else has spotted the fatal flaw at the heart of our quest. The problem is that as we are always moving along King Street, we won’t be able to go back to the nice places we find – well not for a couple of years at least. However this flaw will not be an issue with Noon and Night Thai Cuisine, as we won’t need to go back there.

The Noon and Night outing was a spur of the moment decision at the end of a busy week and weekend, with another busy week in prospect. We were also keen to get on to our first Thai and to try our first odd number (yes I know, sad but true). So we trooped up the hill to the King Street ridge, picked up a six-pack of Stella and made our way to Number 45. There has always been a Thai restaurant of some kind here, for as far back as the internet can remember. 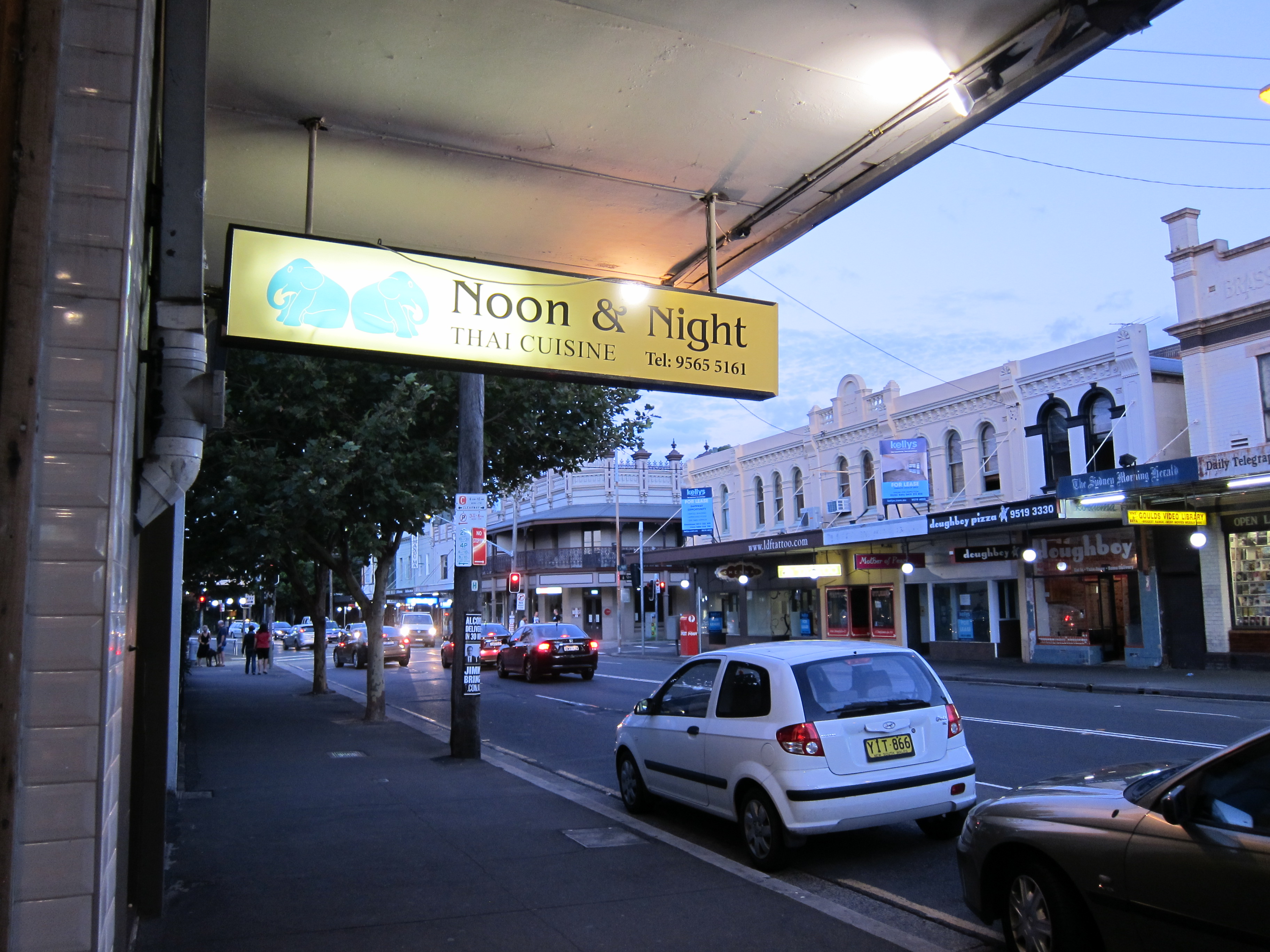 Great names such as Thai Times 9, Thai Times Newtown, and now Noon and Night Thai Cuisine, have occupied this site. Cheap and cheerful is the first impression. Formica tables, smiling waitress… not much else really. It’s located at the cheap eats, student clientele, end of the King Street food market, so we weren’t expecting anything very much, but hoping for a surprise. We imagined that Noon and Night would serve as a baseline against which all the other Thai restaurants can by judged. Unfortunately it sets the bar very low. Strop and I had a quick discussion about how we should approach all the Thai restaurants that lie in front of us. Do we just take the opportunity to expand our (admittedly limited) knowledge of Thai food, or do we compare dishes (always order Pad Thai or something), or do we go systematic (always order No. 37 on the menu for instance). In the end we decided on a bit of each, ordering Pad Thai and No. 37 (Noon and Night Chicken) as well as a prawn and papaya salad from the specials board. Now we won’t have to make a decision on a system of comparison until we get to the next Thai restaurant.

Unfortunately the food was ordinary, especially the salad, which came with whole garlic cloves and large flaps of chilli that had obviously not made it to the spinning blade end of the food processor. Oh well, at least it was cheap.

We finished our beers and headed outside into the King Street twilight. Strop consoled herself by photographing wool in the shop window next door and I found the strangest piece of art in the world, so the evening wasn’t a total loss.

When we tell friends about the quest they often say things like, “Really? All of them? Are you sure? Some of them aren’t very good, you know.” Up until now, I thought our pessimistic friends were exaggerating a bit, or maybe our standards were too low. The first four eateries were all very pleasant, but maybe we are just easy to please. Noon and Night has filled me with confidence again. It’s not us, it’s just that the food has been pretty good. Up till now.