We went to see the film Argo before dinner, which was a good choice because the next day it won a Bafta or a Grammy, or something (I wasn’t really paying attention). The film was good, a slick well made thriller without too much jingoism. The best bit was Alan Arkin’s schtick as a hollywood producer trying to explain what the fake movie Argo was about to a persistent reporter. In the end he comes out with “Argo… fuck yourself.” Maybe you had to be there.

Anyway, after the movie food was called for, and a date with Doughboy beckoned. On the way up a rainy King Street, Strop decided that we should count all the restaurants between Church Street and Doughboy. I didn’t think this was a great idea. Seeing the scale of the challenge might be too much for our puny reserves of resolve. I’m more of a one step at a time kind of guy, but in the interest of marital harmony I joined in the count. We confused ourselves a couple of times by shouting out sightings on opposite sides of the road at the same time but eventually we came up with a mutually agreed and arbitrarily vetted figure of 48.

So we might get back to Church Street by Christmas. I knew it was a bad idea to look too far ahead. 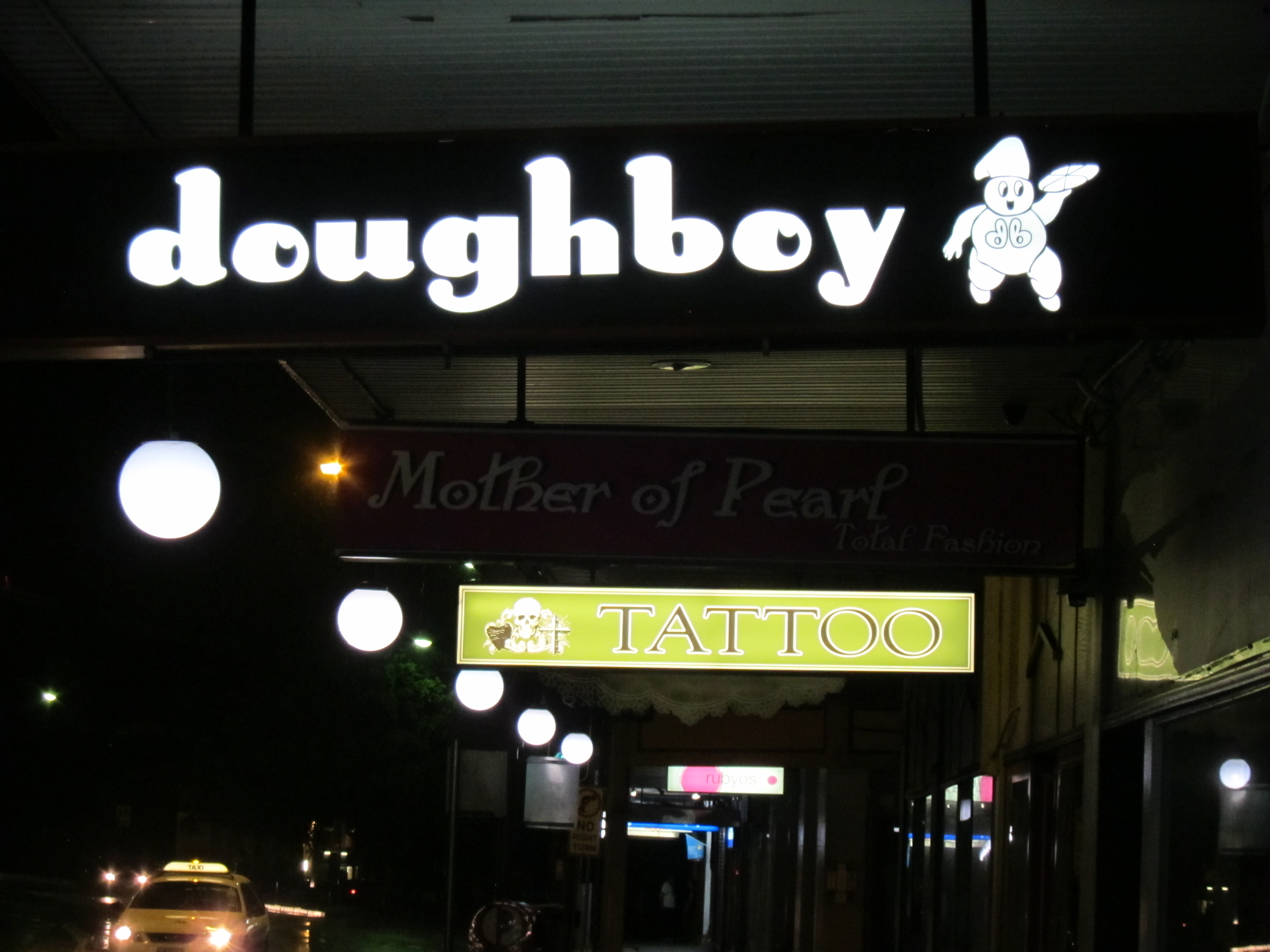 We stumbled into Doughboy a bit damp and overwhelmed by the task ahead of us, but at least all the counting had made us hungry. The restaurant was empty at that stage, so we plonked our bottle of red on a table as far as we could get from the video game machine. Doughboy is a pizza joint (and a chain), not fine dining, so we adjusted our expectations accordingly. But it was very relaxed, the guy behind the counter was very friendly, taking our order at the table, bringing water and wine glasses and playing a fine soundtrack of classic Rolling Stones.

While we waited for the pizzas and salad to arrive I was given the task of quizzing Strop to prepare her for a job interview the next day. I enjoyed it because a could ask a nice public servant-y type question then tune out and check out the decor or Twitter or listen to the conversations of the pizza delivery guys, while Strop waffled on about outcomes and expectations and… sorry I missed the rest. The decor is a bit Andy Warhol meets Mambo, but the art is better than Rubyos. 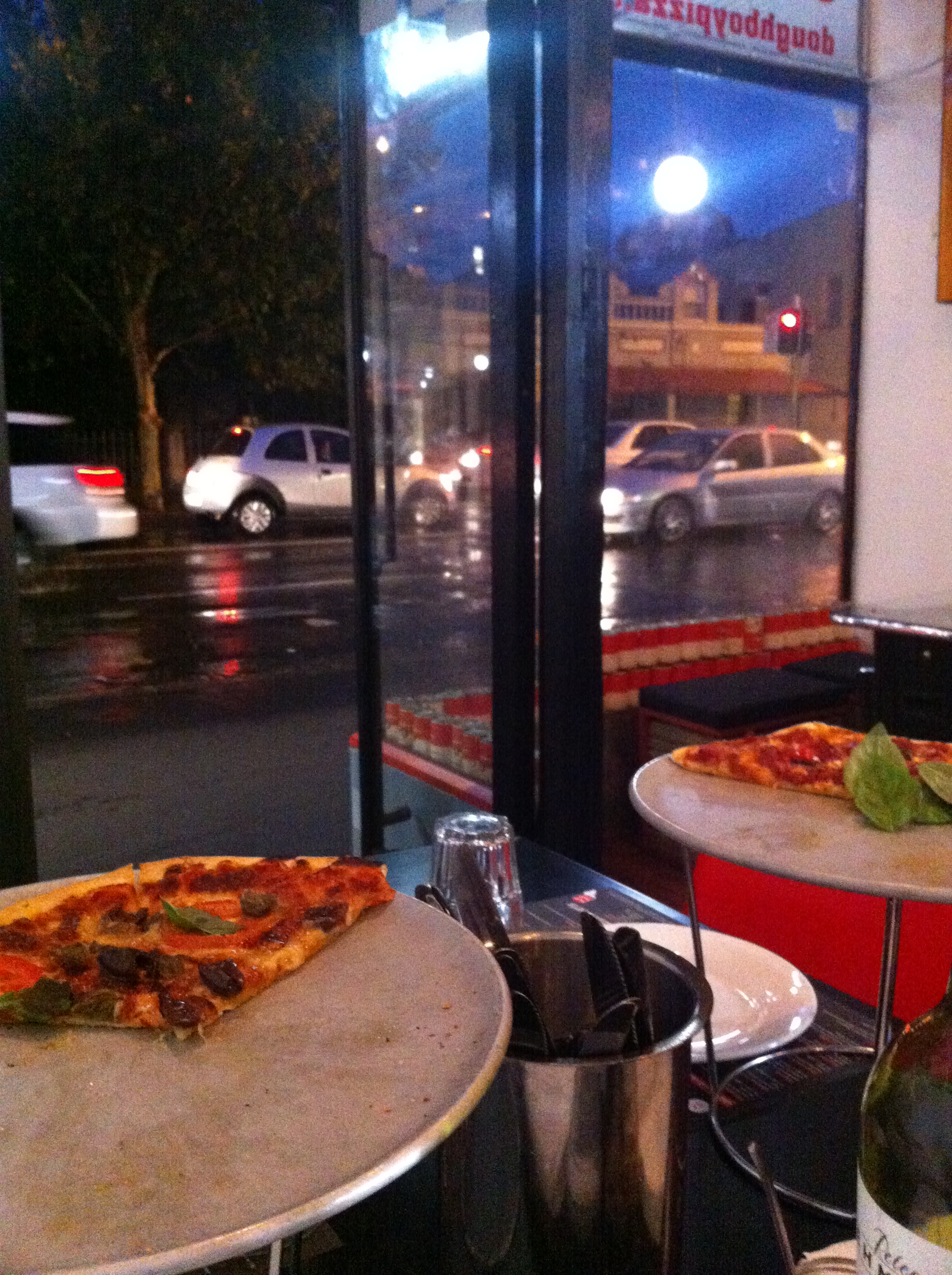 The pizzas were very good without being great. The crusts were nice and thin and crisp but the toppings were pretty standard. We had cheated and had a Doughboy home delivery earlier in the week (for research purposes only) and those had been a bit over-done which was disappointing. But on the night of our visit the pizzas were fine and I’d happily go back again. After the pizza I made the mistake of assuming that because Doughboy had their own brand of ice cream in neat little 1 serve pots, I should try one. I shouldn’t have.

There was lots of lightening and rain as we walked back past the 48 eateries (Newtown’s gutters were working overtime). But we managed to put the task ahead in perspective, and we’re quite looking forward to the first of many Thai restaurants. But that will have to wait until after the Vanguard which is next up.

When we got home our perfect evening was somewhat marred by an unseemly argument about whose responsibility it is to find cat vomit under the bed. I’ll just say that I don’t think I can be held responsible for what is concealed behind the overhang of the bedspread, and leave it at that.