First up we need to acknowledge those who have gone before us into the King Street Culinostromy. Conquering King Street has blogged her youthful way around the strip before us. So we must face the fact that we are not pioneers but merely pilgrims travelling a well worn path. I believe however that our pilgrimage still has validity, our quest differs from Conquering’s in that we bring a winning combination to the table: an obsessive structure, poor research and not much knowledge of food. She has the runs on the board, but we still have the job in front of us. 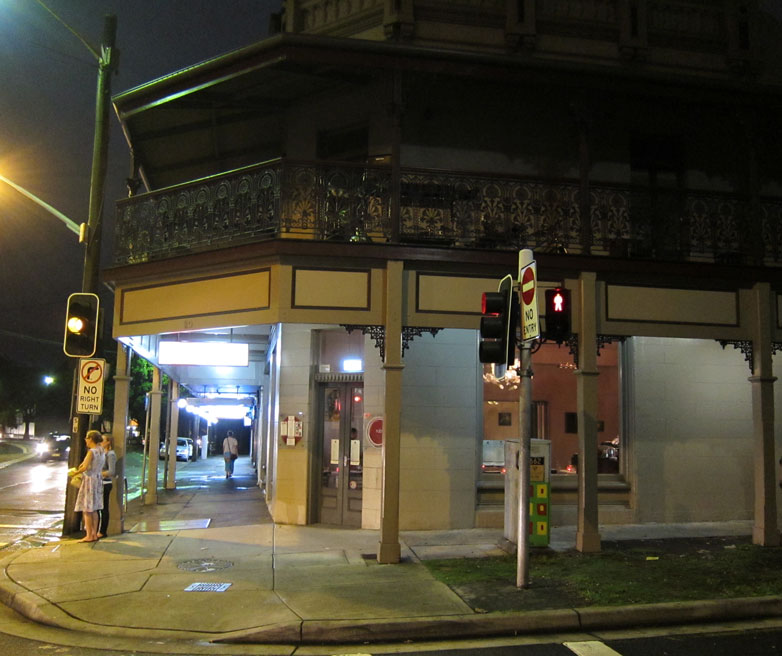 So on to Rubyos. This place is something of an anomaly, it is an outlier, it doesn’t look as if it belongs in Newtown. There is the name for a start. What does it mean? Is it some ethnicity I’m unfamiliar with (no shortage of those)? Is it one of those weird invented combinations of two peoples names? Then there is the graphic style… the tastefully restored corner heritage building, the sparse interior with Miles Davis soundtrack and the weird paintings of large eyed girls (one of whom seems to be sporting a giant cold-sore). But it has survived and prospered at this end of King Street while lesser establishments have withered and died. So it must have something going for it.

Well, yes indeed it does – firstly the staff are excellent, friendly and attentive. Secondly the menu is basically made up of a collection of entrees for sharing. That right there is Strop’s idea of heaven. She is very big on small serves and the whole sharing thing, especially if I’ve ordered dessert and she hasn’t. There is lots of wine by the glass and a good cocktail list as well.

The ‘Grazing’ menu is eclectic. It combines European, Asian, American and Middle Eastern influences. Is fusion the correct term I wondered as I tried to decide between the isan style turkey laab, the Javanese chicken breast and the French charcuterie plate. As there were only two of us we were unable to try all the yummy things being offered. We were also limited by Rule Number 5, however when we checked the fine print it was clear that the $100 limit didn’t include drinks or anything ordered before all participants have arrived at the venue. So we settled on oz Chardonnay for him and frog Beaujolais for her to accompany the charcuterie plate, green pea and pistachio felafel, green beans and feta, and rendang coated lamb rump. The felafel was the stand out dish of the evening – bright green and mushy sweet on the inside, dark brown and crispy on the outside. Double yum. The lamb was a bit disappointing, hotter than it needed to be and lacking that characteristic aromatic rendang-ness.

When it came to dessert we neatly side-stepped Rule Number 5 by choosing Dessert Cocktails. The Lemon Meringue Pie and the Toblerone went down very well. As Strop ran her finger around the inside of the glass and licked off the last traces of her Toblerone, she summed up the evening, “We’d neverly normal do this, would we?”

That is the power of the quest.

Next up will be Doughboy Pizza at number 30.